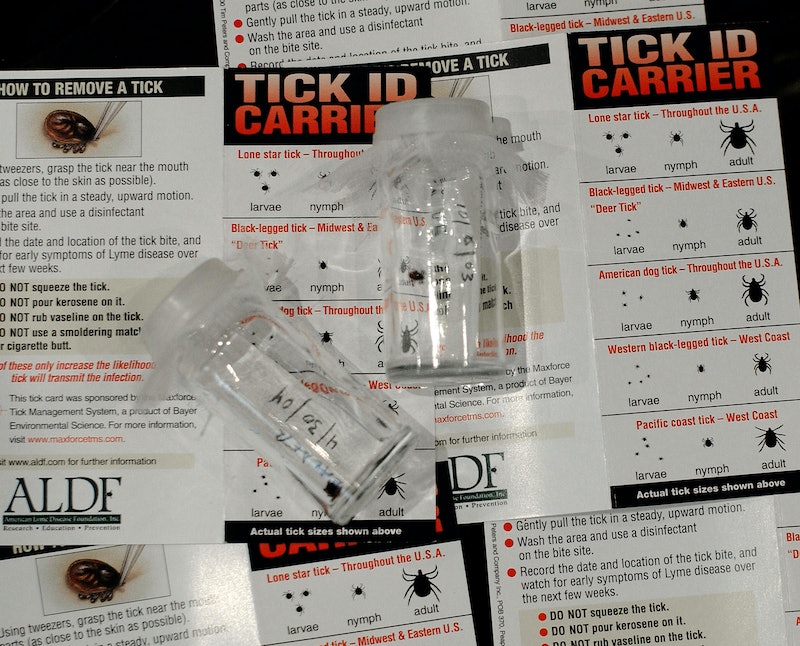 If you think you've been bitten by a tick, Tick Info noted that you could "experience a rash, fever, headache, joint and muscle pains, or swollen lymph nodes within 30 days of a tick bite," and if you have any of these symptoms, you should see your doctor ASAP. Immediately after being bitten, you might also notice redness and irritation at the bite site, though that doesn't automatically mean you will get an infection.

Additionally, if you suddenly develop and allergy to red meat, which can manifest as an extreme case of hives several hours after feasting on steak — and even pork — at your backyard barbecue, it's possible your allergy could be the result of a Lone Star Tick Bite, NPR reported.

While the Lone Star Tick is most often found in the southern, eastern, southeastern, and central U.S., it's been reported that this tick is showing up all over the country. The first sign you may have been bitten by the Lone Star Tick is developing southern tick-associated rash illness, or STARI, which usually presents about a week after a tick bite.

"The rash may sometimes be accompanied by fatigue, headache, fever, and muscle pains," the Centers for Disease Control reported. "All three life stages (larva, nymph, adult) of the Lone Star Tick will feed on humans, and may be quite aggressive."

A lot of things can cause hives, especially in the summer when you're more likely to encounter poison ivy or poison oak. However, if your hives mirror an expanding bullseye-like rash, it's like a sign you've likely been bitten by a Lone Star Tick.

Because early symptoms of STARI can present similarly to lyme disease, it can be difficult to distinguish between the two, the American Lyme Disease Foundation explained on its website. Aside from the bullseye rash, people with STARI will also experience fatigue. The good news is that once treated, your symptoms should subside.

However, even after your other symptoms resolve, you could still develop a red-meat allergy from a Lone Star Tick bite. Aside from aggressive hives, symptoms include congestion, a runny nose, headaches, trouble breathing, and gastrointestinal distress similar to that of food poisoning, according to the American College of Allergy, Asthma & Immunology.

"Symptoms of meat allergy can vary from person to person, and you may not always experience the same symptoms during every reaction," the ACAAI noted on its website. "Allergic reactions to food can affect the skin, respiratory tract, gastrointestinal tract, and cardiovascular system. Meat allergies may also develop at various ages."

Basically, a Lone Star Tick bite can trigger an immune system reaction that causes your body to see red meat as an invader, and because it can take several hours for the symptoms to develop, it can be hard to pin down what's causing the symptoms. You might have several adverse reactions before you realize meat is what's making you feel dark and twisty.

"A bite from the Lone Star tick can cause people to develop an allergy to red meat, including beef and pork," the ACAAI explained. "This specific allergy is related to a carbohydrate called alpha-gal and is best diagnosed with a blood test."

If you have symptoms every time you eat meat, it's worth seeing your doctor. Even if you don't develop a red-meat allergy after being bitten by a Lone Star Tick, alpha-gal antibodies from the tick bite can still be present in your body, and can put you at greater risk for heart disease in the future, according to Live Science. If you want to avoid being feasted on by a Lone Star Tick, the CDC has a list of prevention tips for both you and your pets on its website so you can increase your chances of having a tick-free summer. #TheMoreYouKnow