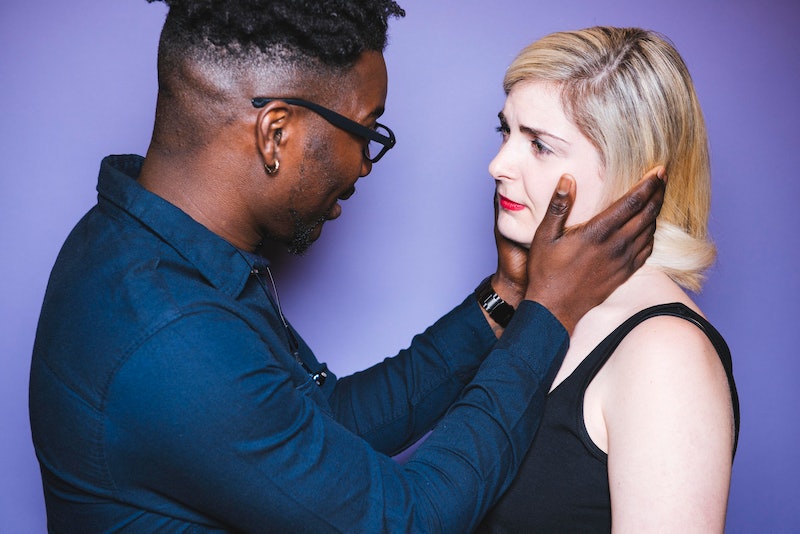 Some people may have trouble dropping the L-bomb for the first time, but telling someone that you don't love them is, in my humble opinion, way more difficult than telling someone you do. Sure, I'm someone who takes a while to come around to expressing my feelings that way, but when you say "I love you" then (hopefully) it's a conversation you're both excited about. Telling someone you don't feel that way about them, however, is almost never going to be easy. But sometimes, you just have to say it. It's not easy, but it's definitely better than letting someone believe something you don't actually feel just to avoid an awkward conversation.

How do you do it? Well, telling someone that you don't love them can mean a lot of different things. One of the main things to bear in mind is whether you are saying that you don't love this person and don't believe you ever will or that you're just not ready to say "I love you" yet. Those are two very different conversations. "Telling someone you don’t love them is likely a starting point to thoughts of whether or not you even want to continue the relationship," relationship therapist Aimee Hartstein, LCSW tells Bustle. "... However, if you aren’t in love yet but sense you might be in the future, that’s not so bad."

So make sure that you're fully aware of where you're at in your own head about it. And if you're not sure, that's OK too, it's just about being honest and not misleading anyone.

Here's what to keep in mind.

If You Don't Love Them Back

If you just don't have feelings for someone and probably never will, you need to let them know that — especially if they've just declared their love for you. It's time for one of those big, hard conversations. "In my opinion if you are in the situation where you need to tell someone that you don’t love them, you probably have a bigger conversation you need to have with yourself and with the other person If your partner is in love and you aren’t, the relationship might not have much of a future," Hartstein says. "Saying you don’t love them is likely part of a 'where is this going'/breakup conversation."

You may not feel ready for it — maybe you've been putting it off — but having to admit you don't love someone can force a much bigger conversation. And, if you don't think you'll ever love the person, then it may be a breakup conversation that probably already needed to happen. Pull off that Band-aid. But you need be aware of their feelings, so make sure that you're as compassionate as possible.

If You Don't Love Them Yet

The easier version of this conversation — well, a little easier — is if you feel like you might love the person eventually, but you're not there yet. You still need to be kind and aware of their feelings, because it sucks not hearing "I love you" back, but you can cushion the blow with the fact that you think you might or will feel that way one day. "Responding to your partner saying 'I love you' before you're ready can be tricky," author and relationship expert, Susan Winter, tells Bustle. "[That is] if you don't feel for them what they feel for you." "Tell them the depth of your feelings, in detail," says Winter. "Include the ways in which they make you happy and add value to your life. If you can't yet say 'I love you,' then it's best to describe the growing emotional connection you're feeling your mate. This provides security, as it shows you're both moving in the same direction."

As long as you can talk about how much you do care about them, it should be a conversation that, although it isn't easy, you can both leave feeling good about.

If You Don't Love Them Anymore

Maybe the hardest conversation is telling someone you used to love that you don't love them anymore. You probably have been denying it to yourself until you can't do it any longer. "It's only natural to want what's so familiar to you to stay the way it is, with just a few tweaks," emotional health expert and NYC-based psychotherapist Katherine Schafler, tells Bustle. "But sometimes those tweaks aren't possible, because one or both people are already checked out. If you're staying out of guilt or a desire to not hurt the other person, your hearts definitely in a good place, it's just not in the relationship anymore. Staying with someone out of pity is not kindness and ultimately, it hurts your partner more in the end, which is not loving at all."

Make sure to pick your timing carefully and give your partner plenty of room to ask questions, be upset, or set ground rules. You're the one stepping back, so you need to follow their lead if they want to cut you out of their lives or if they just need time.

It's hard telling someone you don't love them, but you can't help how you feel. As long as you go into it with empathy and consideration, you'll be fine.