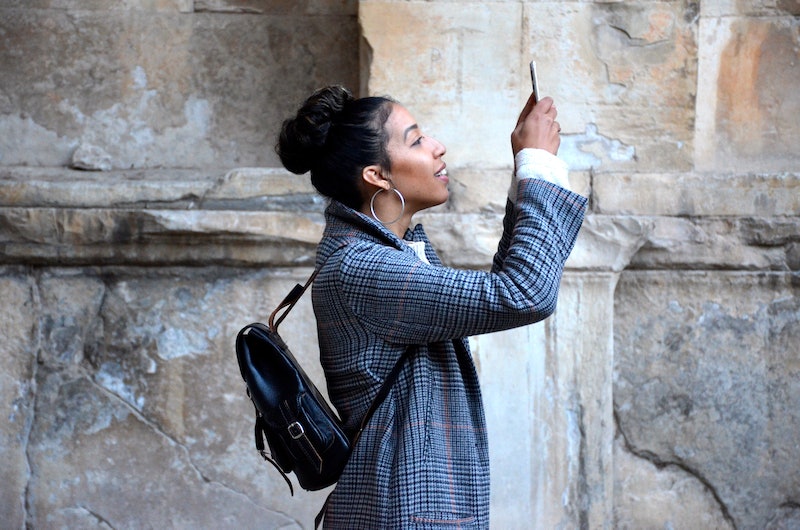 Just when you thought you would (maybe?) never use Snapchat again, you bat an eyelash and there's another update. But Snapchat isn't necessarily reinventing the wheel here. Your other favorite social media apps all have a way to add a time stamp or to "map" out your current move. So Snapchat's new "Snap Map" isn't the first the time you could cyber-stalk your friends and favorite influencers on social. If you're somewhere between wanting to share your whole life and not wanting everyone to know where you are all of the time, alas, here's how to turn off Snap Map on Snapchat if you've already enabled it in your settings.

But first, let's chat about what's cool about this new feature, which only turns on if you specifically add it on Snapchat. Product designer at Snapchat Jack Brody told Refinery29 that it's more about finding out about what your friends are up to, and less about adding your location as it is on other apps. And now we understand why this was a response to a reaction to the undefeated FOMO: If you've ever had someone snap you something to the effect of, "Where was my invite?" Snapchat has an answer. Brody said, "Interestingly, one of the habits we've seen with our users is that they'll take a snap where they are, put on the geofilter, and post it to their story with a caption like 'hit me up.' They're basically saying come hang out with me here. Then, when they leave there they'll delete that from their story." Bonus: the new feature includes cute little Actionmojis, which is a lot like a Bitmoji but on your Snap Map!

But again, it might not be your thing — and that's OK! So let's make you a little less paranoid so that you can get back to snappin’ those bomb selfies.

If you’re already freaking out about having to delete your snaps for fear that a few followers know where you are and what you’re doing, don’t just yet. You should check that you have Snap Maps turned on. And, if your location isn’t turned on or your account is set to private, chances are this isn’t the time to freak out. It probably wasn’t on to begin with. Better yet, your snaps would have to be posted to “our story” instead of “my story” for anyone to see your Snap Map. If all of this applies to you, there are two ways you can actually turn it off.

No, this doesn’t mean that you ignore that text message! (P.S., that’s actually quite rude.) You can choose “ghost mode,” which will make sure your Actionmoji can’t be seen on the map. If you’re worried that a certain follower shouldn’t know your whereabouts, you can share it with only the few, the proud, and the brave.

2. Turn Off Your Location Services

Yes, that’s right! You don’t even have to open the app to make sure your location isn’t shared unless you want it to. If you go to your settings on your iPhone, you can select whether you want location services turned on for Snapchat. And voilà! You are no longer trackable.

If you want to incite an adventure between you and your fellow snappers, you can turn on your Snap Map and relieve their FOMO. Or, if you aren’t quite feeling this generation’s “OK” on sharing, you can turn it off. The possibilities, and now snaps and locations, are endless!

But again, it's OK if it's not your thing! So let's make you a little less paranoid so that you can get back to living your best life.