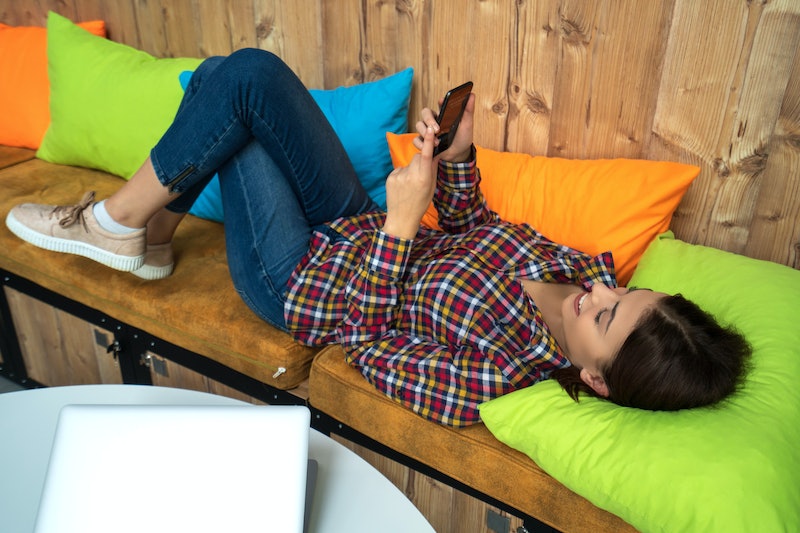 Everything is cooler in Dark Mode, in my opinion. From Twitter to Reddit to Youtube, and now Instagram, a lot of tech companies are starting to offer the new option. Whether it's because you want to give your eyes a break or you just love the aesthetic, you can hop on the bandwagon and turn on Instagram Dark Mode — and it only takes a few seconds.

Starting on Oct. 8, Instagram users were able to see their feeds and profiles in a new, darker setting. The head of Instagram, Adam Mosseri, alerted users of the update via a tweet that read: "Starting today, you can use Instagram in dark mode on iOS 13 or Android 10. Turn dark mode on your phone to try it out." But unlike Twitter and other apps that have the feature, Instagram's Dark Mode isn't something you can turn on and off directly in the app, according to Mashable. Instead, you have to turn it on through your phone settings, and this goes for both iOS and Android users.

In order to turn it on for your iOS device, you simply have to go into your "Settings" and then tap on "Display & Brightness." There, you'll be able to choose between "Light" or "Dark." After selecting "Dark," you should see you device's entire display go into Dark Mode, including your Instagram. You can also avoid all of these steps by simply asking Siri to turn on Dark Mode. If you have an Android instead, you can turn on your Dark Mode by going into your settings and then tapping "Display" followed by "Theme." Under this you should find "Dark Theme." By tapping this, your device and Instagram will go into Dark Mode in the same way as an iOS device.

Instagram is not the first to use Dark Mode features and it certainly will not be the last. The trend started as a way of making apps and programs look more chic, being easier on the eyes, and actually saving battery, CNN Business reports. As the outlet explains, Dark Mode saves battery because the black and grey tones take up less power to display than lighter ones.

And apps like Reddit and YouTube aren't the only ones adopting a Dark Mode option. Gmail, Twitter, other Google apps, Facebook Messenger, Slack, Waze, and XBox One are also following the popular trend. In particular, Twitter took Dark Mode a step further by offering not one, but two different Dark Mode options. "The love is real for dark mode themes Dim and Lights Out," Twitter wrote in a July, 15 2019 press release about its updated site. "You’ve asked for even more ways to personalize Twitter so we’re bringing you different themes and color options, along with two options for dark mode."

So whether you want to take it easy on your eyes or add another dimension to the style of your Instagram feed, you can turn on your Dark Mode and join in on the fun.