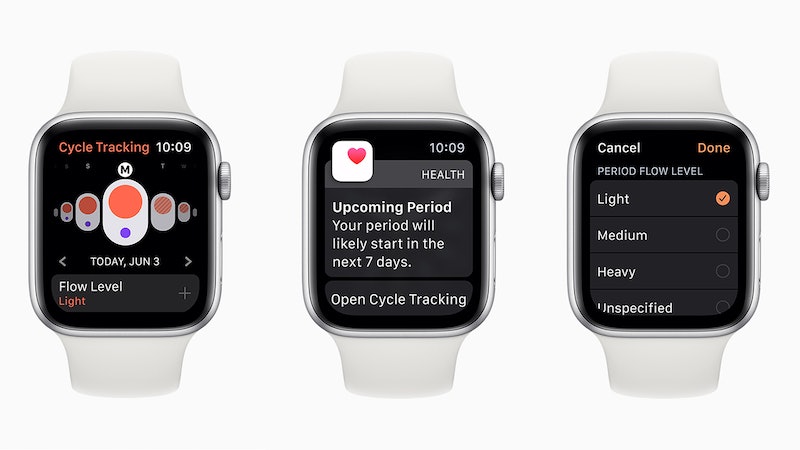 During the always-anticipated Worldwide Developer Conference (WWDC) Keynote on June 3, Apple announced a handful of new features and tools users can look forward to seeing starting later this year. In addition to exciting updates like iOS 13’s Dark Mode, it was revealed that Apple will be launching Cycle Tracking app for iOS 13 and watchOS 6. This is particularly good news for anyone who has a habit of running out of tampons right before their cycle is about to start (me, @ myself).

Apple’s new Cycle Tracking app, like other period tracking apps before it, will allow people to log information relevant to their menstrual cycle to help predict future periods. You’ll be able to input data like when your period starts, how heavy or light your flow is, and any symptoms you’re experiencing (think headaches, bloating, or cramps). Then, the app will help you track your cycle, giving you updates on when you can expect your next cycle to start.

“The new Cycle Tracking app gives women the ability to log important information related to their menstrual cycles and see predicted timing for their next period and fertile window using the convenience of Apple Watch,” a blog post from Apple states. The app will also allow you to input any contraceptives you use which may impact your cycle or taking as well as “results from ovulation prediction kits and other elements of fertility tracking,” helping to monitor when you are most likely to get pregnant.

Starting Monday, watchOS 6 was available in beta to developers. However, the rest of us will need to wait until the fall for the free software update. In addition to its availability on any Apple Watch using watchOS 6 or higher, the Cycle Tracking feature will be available via the Health app on iPhone when the newest operating system, iOS 13, launches.

The way you’ll be able to use it is pretty simple. First, you’ll need to update your operating system to iOS 13 this fall. Then, just open the Cycle Tracking app on your Apple Watch or within your iPhone’s Health app. From there, you’ll be prompted to answer simple questions like “period flow level.” You'll need to input your menstrual cycle data each time you menstruate (or ovulate, if you're using the app to track fertility), in order for the app to give you precise results.

“Knowing more about your menstrual cycle gives you a window into your health, from simply ensuring you are prepared to understanding your personal patterns and regularities," Dr. Sumbul Desai, Apple’s vice president of Health said during the Worldwide Developers Conference keynote, per CNN. Apple developers worked closely with an OBGYN to help with the design and engineering of the Cycle Tracking app’s features and to make sure the app prompted people to input all the relevant information.

As ABC News notes, this is not the first period tracker available for Apple Watch. Dozens of period tracking apps already exist, and some period tracking apps like Clue and Natural Cycles already have Apple Watch-compatible versions already available. However, Apple specifies that its Cycle Tracking app will stand out, specifically in terms of privacy. Like any data that's used by Apple apps, it's stored on your device or encrypted in iCloud if the user opts-in. All the analysis that's conducted takes place on your iPhone, as opposed to having an outside algorithm read your data.

Other period tracking services have come under scrutiny after news of users’ unauthorized data being shared came to light. Earlier this year, the menstrual tracking app Flo said it would stop sharing health data with Facebook, something many users were not aware the app was doing in the first place, and something that's prohibited by Facebook's data sharing terms, as Mashable reported. Hopefully, Apple’s new Cycle Tracking app will continue to help make medical information more accessible and empowering to the users themselves.