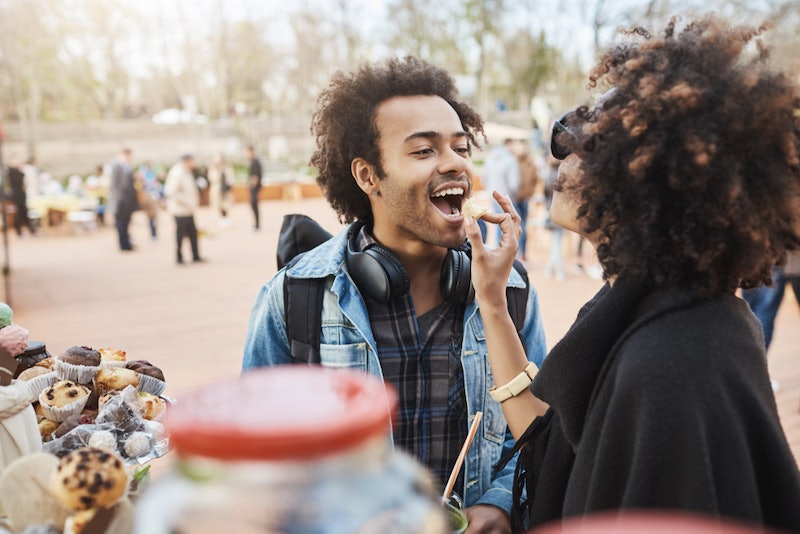 Dating apps are hugely popular ways to meet people, but for people with social anxiety, they may prove to be both a bonus and a problem. Recent research published in The Journal of Social & Personality Outcomes found that people with social anxiety were more likely to report negative outcomes from their dating apps. But experts tell Bustle that if you have social anxiety, using a dating app can be helpful because it takes the pressure off in-person meetings — at least initially. If you have social anxiety and are considering online dating, the results may be challenging — but that, in the end, may also help you grow.

Social anxiety disorder, according to the American Psychological Association, involves anxiety around "being embarrassed, humiliated, rejected or looked down on in social interactions", and dating and meeting new people are serious triggers for anxieties even in non-anxious people. The study in The Journal Of Social & Personality Outcomes shows that, among socially anxious undergraduates, dating apps are a way to circumvent those anxious thoughts. "We found that people who were highly socially anxious preferred communicating with prospective romantic partners via dating apps compared to in-person meetings," lead study author Kathryn Coduto, a graduate student at Ohio State University's School of Communications, tells Bustle.

This, experts on social anxiety explain, makes sense. "One of the great things about the internet is that it gives shyer, more anxious people a safe space in which to socialize. Being able to pause and really consider one's words before typing (rather than being put on the spot in a conversation) can be very useful to folks living with social anxiety," Stefani Goerlich LCSW, a social worker and relationship therapist, tells Bustle. "Having the space to make that initial approach from a safe distance, and to chat with someone and get to know them a bit before meeting up in person, can be beneficial for people who struggle to build relationships in other settings." Apps like Tinder were effectively built to take the stress out of an initial meet-up scenario.

The key to the appeal of dating apps to the socially anxious, Dr. Eric Goodman, a psychologist at the Coastal Center for Anxiety Treatment and specialist in anxiety disorders, tells Bustle, is in their challenge to anxious behavior. "Social anxiety disorder thrives on social avoidance," he says: if you're anxious about social situations, you stay away from them as much as possible, including dates. "The dating apps allow a more controllable and often gentle easing into the dating world. Anything that helps break that avoidant cycle is helpful in the long run," Dr. Goodman says.

However, dating apps also hold hazards for people with social anxiety — both in their use and in how people may react to them. One issue, says Celeste Viciere LMHC, licensed mental health clinician and head of therapy group The Uniting Center, is that you may simply scroll forever. "If you are spending a lot of time on the app and not engaging with people face to face, there is a possibility your struggle with social anxiety can increase," she tells Bustle. "The increase in symptoms can take place because you will tend to isolate and stay in your negative thoughts about yourself."

Coduto's data supports that concern. "We found that people who were both socially anxious and highly lonely not only preferred communicating online, but had a much harder time controlling their use of dating apps," she tells Bustle. The study determined that socially anxious undergraduates tended to "compulsively" use dating apps in ways that interfered with their lives, making them more anxious as a result.

People who were socially anxious in Coduto's study also reacted poorly to lack of success on dating apps. "If you put work into your profile and you're still not getting matches or if you're getting ghosted, it's probably going to make your social anxiety worse," she tells Bustle. "It's probably going to make you question your social skills even further." Goerlich echoes that worry, noting that modern dating apps, with their large pools of potential dates and swift reaction times, aren't designed to cushion the ego. "Online dating involves making rapid, surface-level decisions about real people, based on a few lines and photos in their profile," she says. "If someone with social anxiety sends the first message, and is rebuffed (or ignored completely), that can feel like a rejection of them as people." When this process is repeated, which is very likely with online dating, people with social anxiety can feel their confidence and self-esteem wear down over time, Goerlich says.

The other problem that can occur is a stalemate. People with social anxiety on dating apps, Dr. Goodman says, can "stay in perpetual chat mode with a potential dating partner, dragging it on for weeks until the person stops responding." Dating apps are meant to leap from the digital world to the real world eventually — but if you have social anxiety, making that jump can be difficult, and relationships miss their opportunity to flourish as a result.

However, the benefits of online dating can outweigh the drawbacks, provided you use them wisely. "You should be aware of your use and think about how you're using the apps," Coduto says. "If you're taking them out when you're in social situations or at your job, you might want to rethink that. It's OK to step away from the app, or even delete it and take a break." If, however, you're just feeling a bit challenged by the experience, that's OK, says Dr. Goodman. "Whenever we are doing something that is growth-producing and outside of our comfort zone, anxiety will be there to some degree. The anxiety is a sign that you are moving in the direction of something that is of value," he tells Bustle. "Dating apps will increase social anxiety in the short term, until your brain learns that it is not a threat. It learns that through experience over time."

If you're keen to dive into the world of dating apps but don't know how to manage your social anxiety while doing it, there are a few tips and tricks to help you. Dr. Goodman recommends doing your research about all the different apps to see what might suit you best, having other people help you to set up your profile, and setting yourself a time limit — ask for a date within a set amount of time — to help avoid staying in a holding pattern. Goerlich also says that for people with social anxiety, match-based programs might be better. "I encourage my clients to focus their efforts on apps that require a mutual match before messaging can occur," she says. "That way, everyone knows that there's some degree of initial interest before they spend a lot of time crafting that introductory message." Result: less chance of rejection and less time being exposed to anxiety triggers.

Rejection will happen, and that's a good thing, says Dr. Goodman, because it's not the end of the world; a person with social anxiety learns that "it's tolerable and they can move forward. Rejection is not a catastrophe."

Ultimately a dating app may be a great way to meet a new partner or some friends if you struggle with anxiety around social situations — even if you have to take it slow, turn it off sometimes to give yourself a break, or ask a friend to prompt you to make the first move. However, says Coduto, you need to put your own health first. "These apps come with goals attached to them, but that doesn't mean they're a guarantee, and you should be taking care of your own personal mental health before you try to engage with someone else," she says.

More like this
Hinge's New NFAQ Feature Is Demystifying Queer Dating
By Emma Carey
The Best Time To Date After A Breakup, According To Experts
By Bustle Editors
Why Experts Say Sleeping With A Fan On Isn’t Totally Risk-Free
By Sophie McEvoy
Virgo & Sagittarius Zodiac Compatibility, According To Astrologers
By Kristine Fellizar
Get Even More From Bustle — Sign Up For The Newsletter