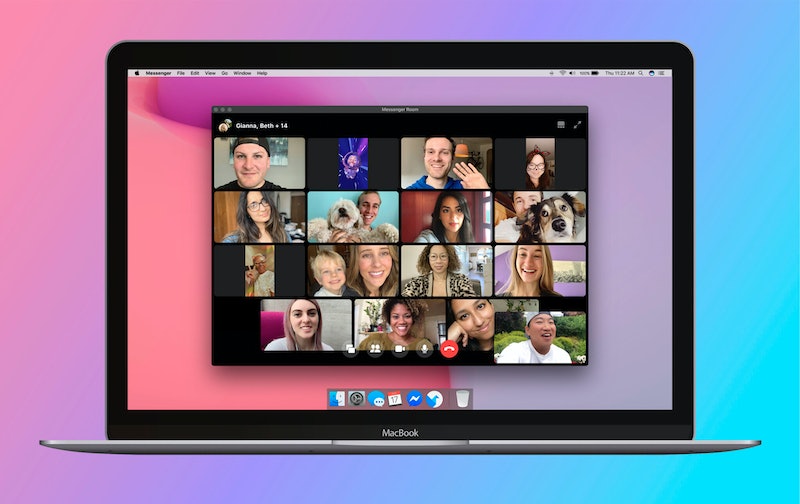 With coronavirus keeping people indoors, the demand for video conferencing apps has gone up, with apps like Zoom, which became the most downloaded app in April with 131 million installations. Now, Facebook is adding to list of ways to stay connected.

Facebook first introduced the idea of the Messenger Rooms to the public back in April, when the company discussed its plans to better accommodate to users looking for apps to keep in touch with their loved ones. The Messenger Rooms started to roll out that same week, but only to a few countries. Starting May 22, though, the Messenger Rooms became available to use for everyone.

Essentially a group video calling feature, the Messenger Rooms serve as a place where you can congregate with people who you might not be able to see while you practice social distancing. You can catch up, throw virtual parties, host online game nights, or just enjoy your favorite people's company in a safe way.

How To Use Messenger Rooms

You can begin a Messenger Room through either the Facebook or Messenger app. Once you start one, you can add whoever you want to the video chat and even control the privacy settings within your room. This means you can lock a room, so no one else can join without your participation. You also have the option to remove a participant, which will also automatically lock a room.

Messenger Rooms can be created using Facebook chat groups that already exist, or by sending out a link to people who you want to include in the call. You can include a maximum of 50 people in each call and without a time limit, you can spend as much time as you want catching up with your favorite people.

While Zoom allows up to 100 participants in a call, it only allows 40 minutes of free meeting time. Other apps like Houseparty have unlimited meeting time but only allow eight people to join. Messenger Rooms meet both of the apps in the middle. And while Zoom lets hosts remove guests from a call, Houseparty does not.

Anyone you want can join your video calls, even people without a Facebook account or any Facebook or Messenger app. As long as someone has access to a smart phone or computer with a camera, they're able to use the link you send them to join your Messenger Room. This makes it easier to stay in touch with older family members who might not have Facebook accounts.

While you do not need a Zoom account to join a Zoom call, you do need to download the app either on your phone or desktop to take part in the call. For Houseparty, you need both the app and an account to join a call.

Facebook's Messenger Rooms allow you to have fun with your video chats. The rooms let you have 360-degree immersive backgrounds, which can help virtually transport you to anywhere in the world you like. Plus, the backgrounds move with you on the screen, so even if you move around, your background will follow.

If you don't feel like propping up a beach background, you can still use Messenger Rooms' 14 different AI Powered Lighting filters to fix up the lighting on your calls. The filters help brighten up your calls so that your loved one can see you better.

Zoom lets you change your virtual background, either to one of their presets or to an uploaded photo of your choice. Unlike Facebook's Messenger Rooms, their backgrounds are not 360-degree immersive ones, so they do not move along with you. Houseparty, on the other hand, doesn't allow you to alter your backdrop at all.

Use Your Favorite AR Filters

If the type of filters you're looking for are more funky than natural, you're in luck. Facebook's Messenger Rooms let you use your favorite AR filters while participating in video calls. From bunny ears to dancing aliens, you can become the life of the (virtual) party with the fun visual effects.

Neither Zoom nor Houseparty offer the use of AR filters directly within their apps. However, it is possible to link your Snapchat account to either platform to include filters.

Facebook is planning on releasing more AR filters in future updates. This could also mean updates with more features that'll make your calls to work, friends, or family even easier to do.