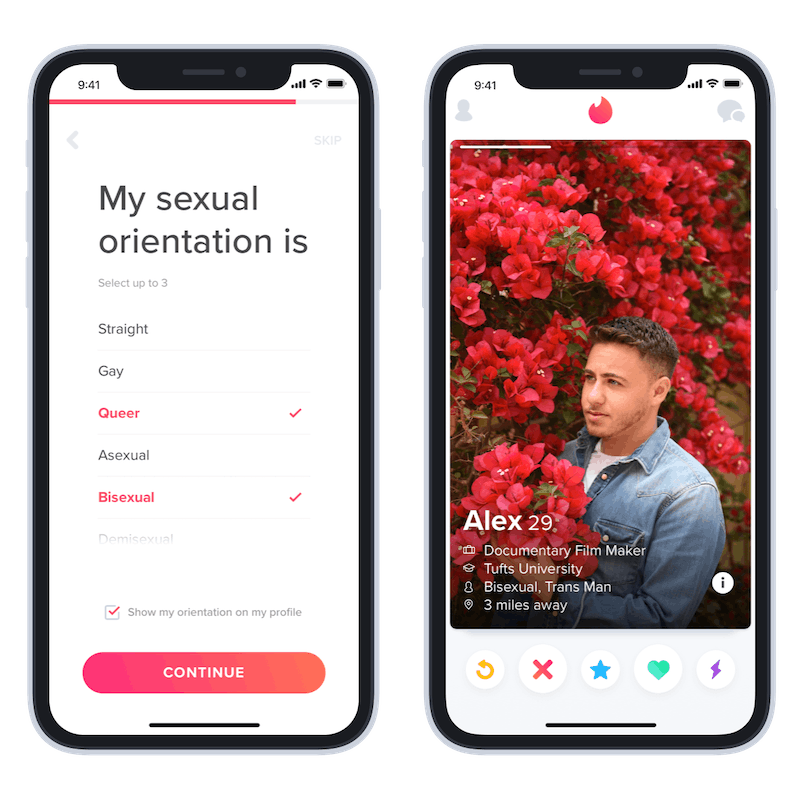 "We want all of our users to feel empowered expressing who they are while connecting with new people — and we’re always working to make that easier for our users on Tinder," Elie Seidman, CEO of Tinder, said in a press release sent to Bustle. "Dating apps are invaluable platforms for connecting the LGBTQ+ community, and we’re beyond proud to continue our efforts, in partnership with GLAAD, to improve the community’s experience on Tinder."

Orientation lets Tinder users choose up to three sexual orientations they best identify with and prioritizes potential matches based on their selections. While Tinder's survey found that users feel that dating apps have benefited the LGBTQ+ community by allowing them to be themselves, it also showed that users want more.

Ask and you shall receive. Orientation is super easy to use. Simply select "Edit Info" on your Tinder app, tap "Orientation," select the terms that best match you, and choose whether or not to display them on your profile. Easy peasy.

Tinder worked with GLAAD to conceive and execute the new features, the press release stated. They also worked with GLAAD to roll out the "More Genders" update in 2016, which allowed users to select the gender identity that best describes them. The company says that More Genders has resulted in over 80 million new matches on Tinder.

More Genders is also easy to update. Just edit your profile, and under "I Am" tap "More" and search for the gender you want to select. In addition to making the app more inclusive, Tinder also announced that its supporting the LGBTQ community this summer by offering free advertising to nonprofits "dedicated to driving social, political, and cultural equality and acceptance of people across all genders and orientation."

In Tinder's survey, 54% of people said they would be interested in dating apps/sites that make it easy to find people who they are compatible with, and the new orientations feature is a way to do just that. Users can opt to have matches prioritized based on whether they match their sexual orientation, meaning if you identify as queer, you can opt to be shown mostly queer matches. This can help filter out potential matches who might not be LGBTQ-friendly, for example.

If you just want to get busy with the Orientation feature, Tinder said it will roll out in the U.S., UK, Canada, Ireland, India, Australia, and New Zealand throughout June 2019. Happy swiping, my friendlies.