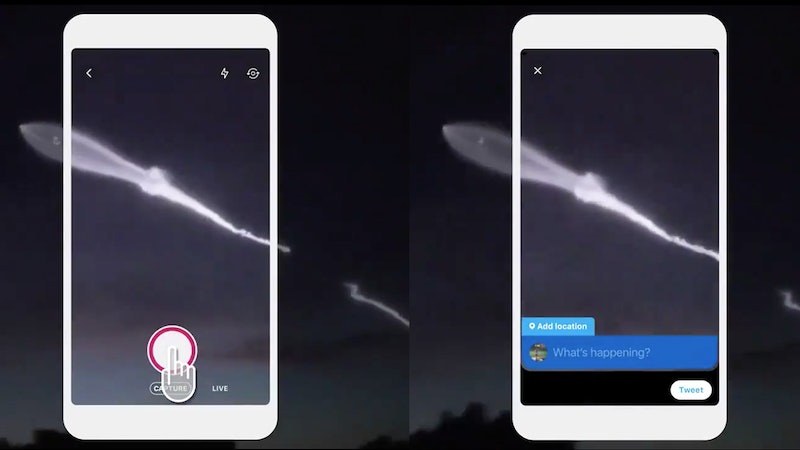 Today at SXSW, Twitter unveiled a new feature for its users designed to make photo and video sharing even easier on the text-centric platform. If you’re anxious to learn how to use the new Twitter camera, fear not: the update should be rolling out to all users over the next few days, per a tweet from the company. In the meantime, you can study up so you’ll be good and prepared to flood your followers’ feeds with Twitter selfies hereby known as twelfies.

Twitter’s revamped camera feature will be accessible by swiping left in the app, similar to how you would access Instagram and Snapchat’s in-app camera. There, you’ll be able to take a photo or a looping video up to two minutes and 40 seconds in length using by clicking the big ol’ circular button. Then, you’ll be able to post your photo or video with your tweet text overlaid on top a la Instagram or Snapchat. (If you’re noting a pattern, it’s that everything is becoming the Instagram or Snapchat.)

Twitter’s camera update will also make it easier to tag events based on your location. As Mashable points out, the app will be able to tell if you’re at a big conference (say, SXSW) and will suggest relevant tags to your photo or video. (Is it creepy? Is it convenient? Is everything both of those things all the time now???)

According to TechCrunch, Twitter doesn’t have plans to give an algorithm-based boost to tweets created using the new camera feature. However, a Twitter rep said their, “combined human and technology curation team may seek to spotlight Twitter Camera tweets in the What's Happening section about live events in the Explore tab.” This is dubiously good news for anyone who doesn’t like when Twitter changes anything about their timeline (read: everyone).

As of now, you don’t need to expect dog filters, “pretty” filters, or stickers flooding the photos on your Twitter feed — although some of these are already accessible in Twitter’s photo editing tool which now has a new shortcut to the camera. You will, however, be able to change the color of the chyron which displays your tweet text and tagged location. Your options are limited to the default blue or one of five other colors.

According to Keith Coleman, Twitter’s VP of Product, they intend the new feature to enhance what Twitter is already doing: amplifying voices. “If Twitter has always been sort of the microphone or megaphone in your pocket, we want it to feel like this was almost the TV camera in your pocket,” Coleman told reporters, per Mashable. “We’re trying to make it really simple to go from capturing what’s happening, to getting it to the audience that really matters and getting it to the people who want to talk about it.”

Will this appease everyone’s plea for an edit button? Will it affect the platform’s harassment problem? Only time and tweets will tell.