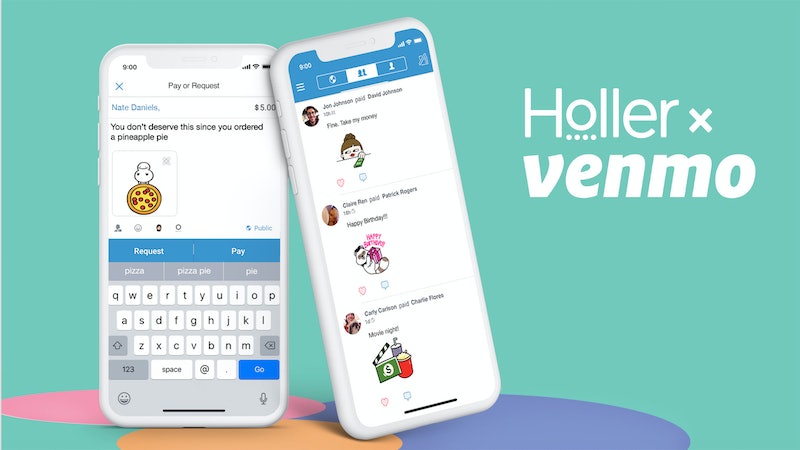 You might not think of Venmo as a social media platform, but it's bringing a whole new social aspect to exchanging money. On Jan. 21, the company announced that it'll start rolling out new animated stickers to Venmo users. The app teamed up with Holler, a tech brand that creates visual messaging content, to give you the option to spice up your payment requests with everything from a rotating pizza to a cute burrito baby.

According to Venmo's press release, more than 90% of Venmo transactions already include emojis. Before this update, the app gave users emoji recommendations based on their transactions. For example, if you were to pay your friend "for pizza," Venmo would use its predictive text technology to show you a pizza emoji you can tap on and plop right into your payment notes. But you can never go wrong with providing even more animation options. Now, Venmo will also suggest animated stickers, similar to GIFs, that you can put into your payment notes. A new video from Venmo shows that if you type "food baby" in the "Pay or Request" section, the app will pull up an adorable burrito baby wrapped in foil or a little smiley taco. From there, it's up to you to choose.

Along with unique animated stickers including light-up signs and a rolling pizza, Venmo and Holler are working with some of their customers' favorite companies in order to create branded content that'll make the animated stickers even more accurate and way more fun. For example, the next time you and your roomie go half on a living room couch at IKEA, you can use an animated sticker of two characters running around with a loaded and labeled IKEA cart to solidify the memory in your Venmo notes. The companies also mentioned Subway as a partnered brand among other ones to be announced in the future.

While the new animated stickers library will be loaded with fun things to try out, Venmo and Holler are encouraging their users to reach out to them if they have any creative ideas for more stickers. And for those who can't wait to decorate their payment notes with these stickers, all they have to do is look out for the latest version of the app and update it.

Whether you're splitting drinks at the bar, sending your little sister an early birthday gift, or paying your friend back for getting you out of that car jam, your Venmo payments are about to get real animated.