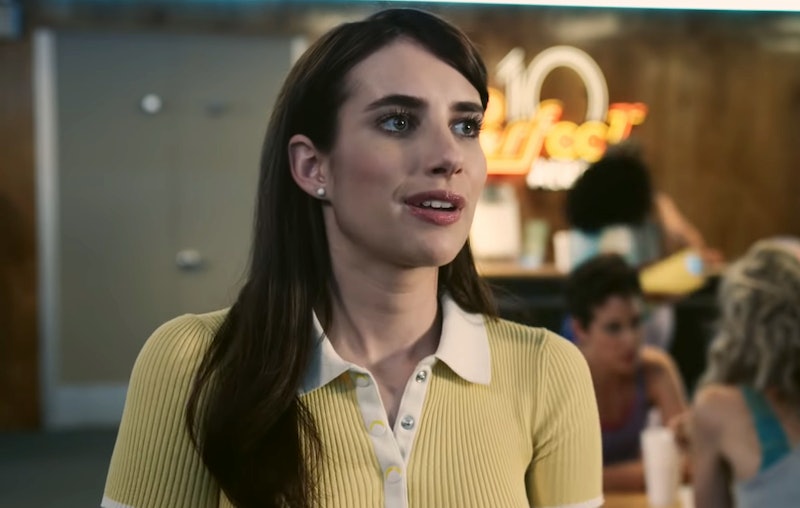 You may already be aware that American Horror Story is back for another season, and 1984 looks set to scare. This will be the ninth series in the American Horror Story franchise and it'll come out just in time for Halloween. Emma Roberts and Billie Lourd will be back for this season and fan fave Sarah Paulson will return for a guest role. But for British stans out there, the questions we need answered first is: how can you watch American Horror Story 1984 in the UK?

Although often UK TV fans are forced to wait weeks, months, or sometimes even longer for premiere dates, luckily that was not the case with American Horror Story 1984 (AHS 1984). As Metro reported, AHS 1984 premiered on Fox on Sept. 19 2019 — just one day after it went out in the U.S. The ten part series airs a new episode on Fox (Sky Channel 124, NowTV, Virgin Channel 157, TalkTalk Channel 422) each week, which means, at the time of writing, there are seven still yet to air.

Veteran stans of AHS may be sad to hear that the legendary Jessica Lange won't be appearing in 1984. Lange told The Wrap "I did [Apocalypse] because it was recreating Constance, which was, for me, a very important time when I did that first season, Murder House. But I don’t think I would want to start from scratch and create a character." She continued by saying, "I feel like I got the best of it in those first four seasons. Great characters. It was exciting to do. I worked with some of my favourite actors but I can’t see that we could ever get back to that."

But, luckily, some of our other AHS faves will be featuring this season. Emma Roberts, Billie Lourd, John Carroll Lynch, and Cody Fern are all back, and Olympian Gus Kenworthy, Pose's Angelica Ross, and Matthew Morrison of Glee will be joining them.

Evan Peters is also noticeably missing as a major role from this season but Digital Spy reported that he said "never say never, I just… Yeah, we'll see what happens," when asked about whether he will return to the show again.

If you're wondering what the new season of AHS 1984 is about, yep, you guessed it, it's set in the '80s and has a distinctly very retro feel. The storyline takes place at Camp Redwood where a summer of fun is well and truly bought to an end when a serial killer named Mr Jingles breaks out of a psychiatric ward and heads for their cabins.

More like this
Here's How To Stream 'Downton Abbey: A New Era' & The New 'Downton' Channel
By Alice Broster and Sam Ramsden
'The Undeclared War' Spotlights The Real-Life Threat Of Cyber Attacks
By Maxine Harrison
Romesh Ranganathan’s Avoidance Is Based On His Own “Maledom”
By Maxine Harrison
Hannah Khalique-Brown Has Her Sights Set On 'Strictly'
By Frances Stewart
Get The Very Best Of Bustle/UK