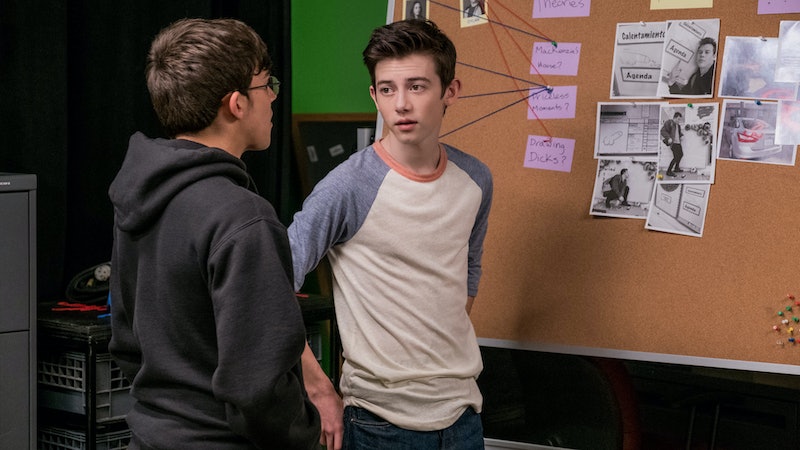 Don't get me wrong, I love true crime. I am a low-key true crime fanatic. But sometimes, listening to, reading about, or watching murderous and violent things gets a bit dreary. Well, thank goodness for some like-minded comedy writers who saw a trend and decided to give it a good old twist. This is where American Vandal comes in. Luckily for people in need of a giggle, it is super easy to watch American Vandal in the UK. Thanks to our sweet baby angels who not only produced it, but also stream both seasons, my one true wife — Netflix.

And why is Netflix my wife? Because Netflix is everyone's true partner in crime, and partner in true crime. See what I did there? Showing not only a skill for picking up some watchable AF content but also being able to totally take the mickey out of itself. Think about it, true crime must be one of the platform's most popular and lucrative genres, yet here they are absolutely rinsing it. Good on them I say. If you can't laugh you'd probably cry. Speaking of which the mockumentary, which is set in an all American high school, will have you crying (with laughter).

Created by Tony Yacenda and Dan Perrault, season one serves penis jokes a plenty. Juvenile, yes, but still hilarious. It's also made in the same style as your serious true crime series with the thrilling music, in-depth interviews, and investigations that get to the bottom of things (which here you can take literally, but more on that later), and of course two inquisitive young filmmakers Sam and Peter, hot on the case. In a previous interview with Bustle, Perrault revealed that he and Yacenda really love true crime, which inspired them to create the show.

"[We're] huge fans of the genre. What spurred the idea was just the fact that there were so many of these that, by the time of Making a Murderer, the genre really spiked. There was definitely enough material to work with."

So, instead of being based around a horrific murder or otherwise criminal case, American Vandal is about a crude act of vandalism that shakes a high school to its very core. And what act of vandalism is this? Probs the same one you see in every high school across the globe. Twenty-size cars left vandalised with phallic images. When the class joker Dylan is accused of the acts, the team set out to discover, did Dylan, described as "a known dick drawer" —really draw dicks everywhere?

Season two, which is also streaming now, centres around that other juvenile but again, funny thing that we all have in common, poo. Yes you heard me I said POO. This time round, Sam and Peter are hot on the case, searching for the guilty party who spiked the school cafeteria's lemonade supply with laxatives. An incident that caused an enormous outbreak of diarrhoea that became known as the brown out.

Although a third (or should I say turd) season has not been announced, considering the show's first season was one of the most successful of 2017, I am sure the best is yet to come.