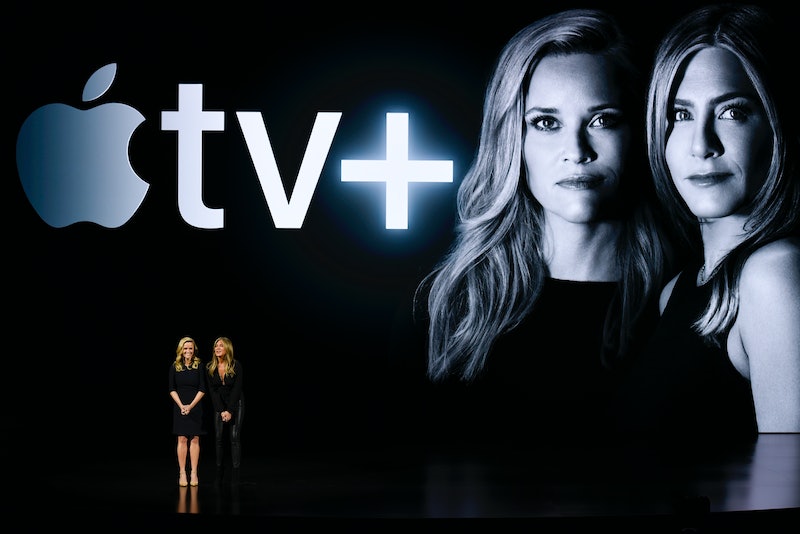 Though it often feels like Apple is doing any and everything to get you to buy their new products, surprisingly, you don't have to have an iPhone or Macbook to watch Apple TV+: Roku users can stream the new shows, too. If they download the Apple TV app, that is. According to an Oct. 15 press release from Roku, all users need to do is create an Apple ID, input a password, and sign in. When Apple TV+ launches, Roku users can get a free trial for seven days. After that, they'll need to pay $4.99 per month (which is relatively inexpensive, compared to other Apple price tags).

However, the release does note that Apple TV+ will not be available on select older Roku models. In a support page on the Roku website, there is list of Roku streaming devices that do support the Apple TV app. To determine the model of your device, go to the home screen, select "Settings," then "System," and click "About."

If your device is compatible with Apple TV, all you have to do is press the "Home" button on the remote, scroll to select "Streaming Channels," and pick the Channel Store. Click "Search Channels" and type in "Apple TV." Then, press the "OK" button. After adding the channel, just sign in with an Apple ID.

Currently, there are some movies and TV shows available to rent on Apple TV+, but once Apple TV+ launches, there will be additional original content that's exclusive to the platform, including:

Reese Witherspoon, Jennifer Aniston, and Steve Carell star in The Morning Show, which is a scripted series that goes behind-the-scenes of a popular morning news program. The show will be available to stream starting Nov. 1.

Witherspoon is also involved with another Apple TV+ series, but she's not on camera for this one. The actor's production company Hello Sunshine adapted Kathleen Barber's book Are You Sleeping: A Novel into Truth Be Told, which stars Octavia Spencer and Aaron Paul. The show, which debuts Dec. 6, centers around a popular podcast that reopens a closed murder case.

The Apple TV+ content isn't limited to TV shows. There will also be original movies, including The Banker, which stars Samuel L. Jackson and Anthony Mackie. Set in the 1950s, the movie tells the true story of two black men who recruit a white man to pretend to be the head of their company. Meanwhile, they pose as a chauffeur and janitor while secretly running the show. The Banker premieres Jan. 31 2020.

The Apple+ and Roku partnership is a game-changer for both companies. Apple can bring in more viewers beyond its existing customers, while Roku users will have a wider range of entertainment options to choose from. But the true winners here are the viewers, who will have a lot of new content to marathon.

More like this
Here’s Everything Coming To & Leaving Netflix In February
By Jake Viswanath
This First Look At 'The Gold' Shows Jack Lowden In A Whole New Light
By El Hunt and Sam Ramsden
Adam Ali Hopes 'Waterloo Road' Will “Subvert” Queer Misconceptions
By Sam Ramsden
'Grease: Rise Of The Pink Ladies' Is The Origin Story We’ve Been Waiting For
By Sophie McEvoy
Get Even More From Bustle — Sign Up For The Newsletter