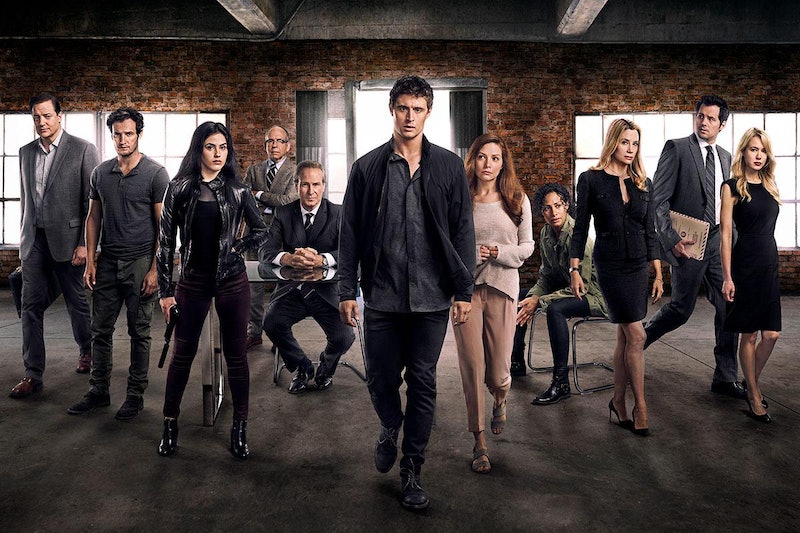 Thought you'd had enough dramas for one autumn? Think again. While us Brits are currently slaying the airwaves with the likes of The Little Drummer Girl and Informer, the U.S. are following suit with a plethora of new shows to sink your teeth into. If you're a fan of the James Grady novel Six Days of Condor — and the screenplay for the 1975 film adaptation starring Robert Redford — you're in luck, as it's now been made into a 10-part thriller. So, here's how to watch Condor in the UK.

Released in the summer in the States, the first two episodes of Condor will be premiering on British screens tonight (Oct. 29) on Universal TV at 9 p.m., slotting perfectly into what seems to be the next golden age of television thanks to a resurgence in quality drama over the past couple of months. According to TV Wise, Condor's place on British television has been a long time coming since the show's original premiere, as "MGM Television [had] been seeking a UK home for Condor for more than year; after initially launching the series to UK buyers at the 2017 LA screenings."

And after only running for a month, Condor was already renewed for a second season, The Wrap reports. It's no wonder then that the series found its place on British TV.

While it's hard to forget Robert Redford portraying the role of Joe Turner, I think it's safe to say that Max Irons is the perfect fit for the CIA analyst. Often conflicted about his role in the agency, Condor sees Turner having to go on the run after discovering a piece of intelligence that results in his entire office getting killed. Turns out that what Turner learned also threatens millions of lives, and it's down to the analyst to "redefine who he is and what he's capable of" to find out and stop the conspirators behind this "deadly objective."

If that isn't enough to grab you, Condor also stars William Hurt and Brendan Fraser (yes, he's back and better than ever), and has been met with rave reviews. While it's understandable that comparisons will be made between the book, the film, and the series, it seems that show-runners Todd Katzburg, Jason Smilovic, and Ken Robinson have successfully made Condor its own entity.

Described by The New Yorker as a series that rewires "the anxieties of classic paranoid thrillers for contemporary nervous systems," the show "presents every citizen's sense of isolation as the product of a state overrun with double-dealing."

Basically, Condor is another show that strongly projects our inner most thoughts and fears about being controlled by an overbearing government. Y'know, the usual. Dystopian thrillers are all the rage, and it's not that surprising, TBH.

At least there's comfort that Condor is fictional (at least I hope it is), and that looks like it's going to be yet another show for me to obsess over. I do love a good thriller, after all.