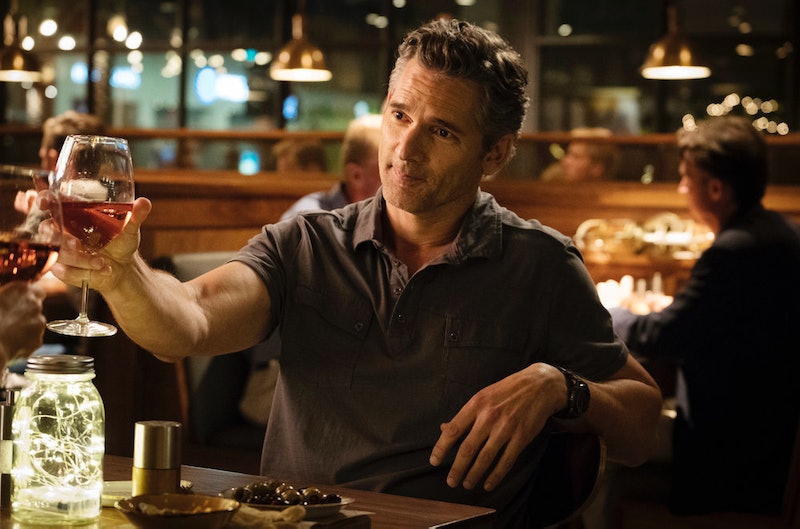 Dirty John is just another one of those shows that your mates from the States get to tease you mercilessly about. While sometimes, it does feel like they get all the good stuff, there's always a way to get in on the action in the UK too. If you're unfamiliar, Dirty John stars Connie Britton as Debra Newell, a seemingly content lady whose life goes haywire when she falls for the hot doctor aka 'Dirty' John Meehan, who's played by the irresistible Eric Bana. Sound good? Then here's how you can watch Dirty John in the UK.

Update: The Radio Times reports that Dirty John will be available to stream on Netflix from Thursday 14 February, 2019.

Earlier: The show, which is based on a podcast, premiered on Sunday, Nov. 25, with Entertainment Weekly calling it "a dazzling matchup of pulp and prestige." While Stateside viewers got to catch it on Bravo, if you have a Youtube subscription, you can stream the first episode on the Bravo site.

Other options seem to be sparse at the moment, but since, according to the Hollywood Reporter, American Netflix managed to acquire the rights for the show back in July, I reckon you should keep a look out for it on your Netflix homepage within the coming months. But if you're really struggling, you can listen to the haunting podcast that launched the TV show.

But what exactly makes John "dirty?" Well, basically, he's just the worst. As in, he puts the "dirt" in "dirty." When Debra meets the handsome, smarmy John, she's quickly "drawn deeper into his lies and sinister game of psychological manipulation," and "it results in horrific consequences for an entire family," according to the show's bio on the Bravo site.

So far, the show seems to stay true to the podcast it's based on, and dirty John doesn't seem to veer too far from the real John, either. That's right. What makes this show doubly creepy — not least because the abuse and manipulation depicted is sadly true to many women's experiences — it's also inspired by a true story.

The podcast is hosted by the LA Times' Christopher Goffard, who pries into the indecent life of John Meehan. In one episode, as Esquire reports, Goffard finds out that Meehan acquired the "Dirty" nickname while he was studying at Arizona university, where he became known for the many women he slept with. His classmates there reportedly also described him as "rotten [from] top to bottom.”

Meehan met the real life Debra Newell on a dating site in 2014, according to Esquire, and by their third date he'd reportedly already said "I love you." Romantic? Creepy. From there, some ugly past truths begin to emerge, and Dr John Meehan isn't who he seems. One flaming car and emotionally abusive game of cat and mouse later, and Newell too sees Meehan for who he really is.

In the post-#MeToo era, where men's questionable behaviour is put on blast more frequently, Dirty John is a poignant look into dangers many women face when dating men. Oh, and it's seriously compelling listening/viewing, too. Seek it out immediately.