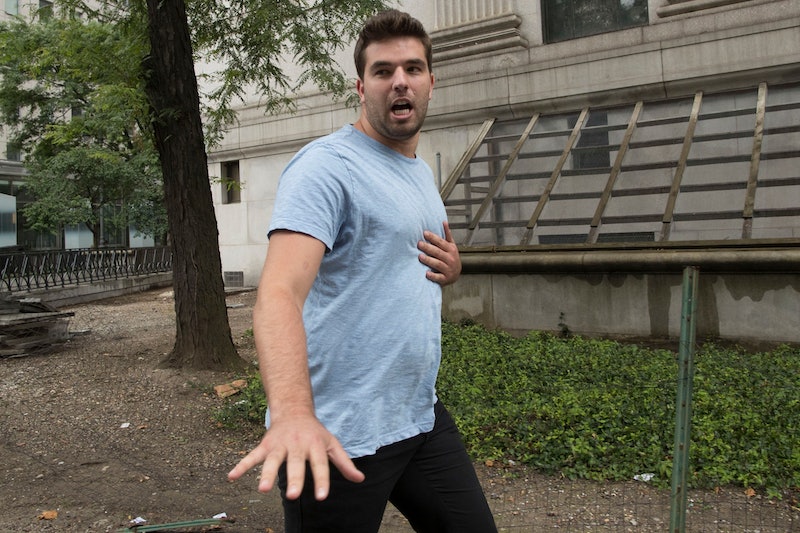 I can't say I've had many good times on Twitter, but I had a really, really good time when I got to see Fyre Fest unfold. Furious attendees took to the platform to express their outrage when they realised that the luxury island festival they'd been promised was something more like Castaway. Then began the onslaught of Twitter posts, which exposed the festival for the scam it was — all to ridiculous, sometimes hilarious ends. Netflix have already given you an insight into how it all went down, but another angle exists. If you're wondering how to watch Hulu's Fyre Fraud in the UK, then I've got some bad news.

Since Hulu is a U.S. streaming service that is exclusively available to U.S. residents, it's looking a bit tricky for Brits to get their hands on the Fyre Fraud doc. So right now, your chances of getting to watch the documentary right now are about as likely Fyre Fest returning for another year. Buzzfeed's TV editor Scott Bryan tweeted on Sun, Jan. 20: "I've heard nothing," when asked about the possibility of getting to see the Hulu doc in the UK. Meanwhile, Deadline's editor Peter White reported that "No one has bought it [yet], but would be a smart move for a UK broadcaster given the buzz." So, watch this space. (As a side note, White went on to say: "The Netflix doc, however, is a better film.")

In more bad news, Hulu Support also tweeted on Sat, Jan. 19: "We don't currently have rights to stream content outside the U.S." However, we can assume that the streaming service has been made aware of the demand and disappointment from UK viewers in need of another Fyre Fest exposé, so hopefully they're looking to amend that situation ASAP. I'm praying that all of this interest will make Hulu finally go international.

But until then, or at least until a commissioner in the UK has the good sense to pick up the rights to Fyre Fraud, is it really that unreasonable to go to the states for the sole purpose of watching a Hulu documentary? I mean, it seems no more unreasonable than paying thousands of pounds to travel to a remote island with Blink 182? Unfortunately, that seems like your only option right now, unless you're into playing the long, long waiting game.

Just to rub salt in the wound, as Bustle U.S. reported on Jan. 19, the main difference between Hulu's documentary and Netflix's one is that the Hulu version features an interview with Fyre Fest founder Billy McFarland. To throw some further shade Netflix's way, Hulu also takes the time to point out in their film that their rival's doc was produced by Jerry Media, the same company who were responsible for Fyre Fest's social media campaign. Ooooh.

Ultimately, the difference between the docs, as Bustle reports, is a difference in scope. While Netflix goes into the minutiae of the event, and the organisers behind it, Hulu goes wider, considering what the Fyre Festival debacle says about pop culture, social media, and what fraud can look like in the modern era. As NPR reports, McFarland is now serving a six-year jail term for Fyre Festival and what the SEC called a "sham" ticketing company he ran afterwards.