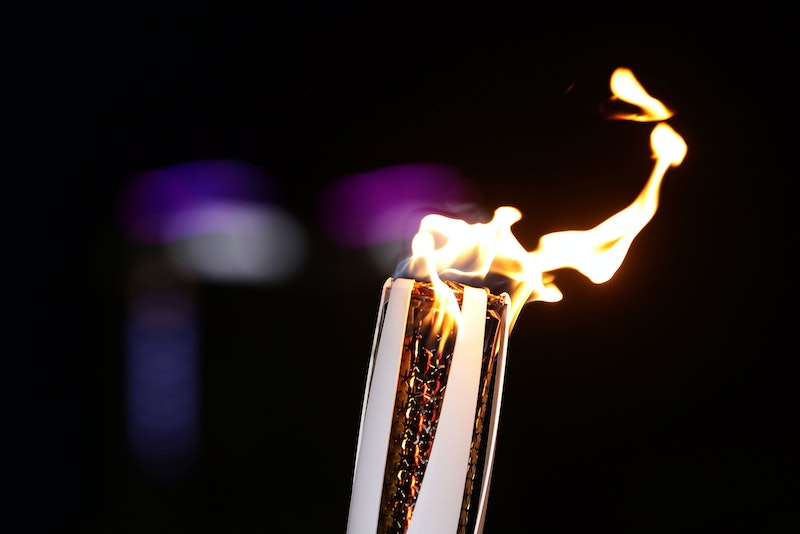 Finally, the moment you've been waiting four years for is only a few days away. That moment is, of course, the PyeongChang Olympics opening ceremony — and you've got to get your watching plans sorted out with plenty of time to spare. Given the massive time difference between the United States and South Korea, you might be wondering how to watch the 2018 Winter Olympics Opening Ceremony live, but have no fear — it will definitely be possible.

NBC owns the broadcasting rights for the Olympics in the United States. And unlike in previous games that involved tape delays, viewers across all time zones will now see important results at the same time. This means that social media won't be the same minefield of spoilers that it used to be during any Olympics.

NBC will be airing the Olympic Opening Ceremony at primetime on Friday Feb. 9. That's well after it will have taken place in South Korea, which is 14 hours ahead of the Eastern Time. In PyeongChang, the ceremony will air at 8 p.m. that same day — that is, 6 a.m. EST. However, every Olympic event will be streamed live using the NBC Sports app, which you can get on any mobile device. While NBC has done this in the past for all events excluding the opening and closing ceremonies, this is officially the first year it's changing that. So, you'll be able to stream the Olympic Opening Ceremony live from NBCOlmpics.com or the NBC Sports app.

The 2018 Olympics will actually be the first games where you'll be able to live stream the entire competition on the NBC Sports app or on NBCOlympics.com, which will make your life a lot easier if you're obsessed with the Winter Olympics. NBC is actually catching up to the European national broadcasting services with this new feature of its coverage, as European counterparts have already been doing it for a decade. All in all, NBC will stream almost 2,000 hours of coverage — just about double what it offered in Sochi in 2014.

Although the organizers of the Opening Ceremony have worried that it might be bone-numbingly cold for spectators in an open air stadium without a roof, PyeongChang is bound to put on a show that will make it worthwhile. As part of an expected display of Korean cultural heritage, you'll probably be able to enjoy a lot of K-Pop and the other aspects of "Hallyu," or the wave of Korean culture that has recently been sweeping the globe. They haven't yet publicized who exactly will be performing, but the element of surprise is always the best part when it comes to an opening ceremony.

No matter which superstars of K-Pop show up, you can be sure to get the mainstays of Olympic opening ceremonies. There's always the mesmerizing parade of athletes, all in their exciting (and sometimes over-the-top) national outfits. There's always the touching end of the torch relay, and the official beginning of the games when the Olympic flame finally gets lit. There are always welcome speeches, musical performances, and glittering displays that show off the host country. There's also usually at least one funny gaffe, typical of any huge spectacle — think of the Olympic ring that didn't open in Sochi.

In short, there will be a lot for you to enjoy, and thankfully NBCOlympics.com or the NBC Sports app will be there to help. This is truly one of the great benefits of the modern world — you'll be able to wake up early on the morning of Feb. 9 and start your day off in an almost unimaginably exciting way: with the PyeongChang 2018 Olympics Opening Ceremony.