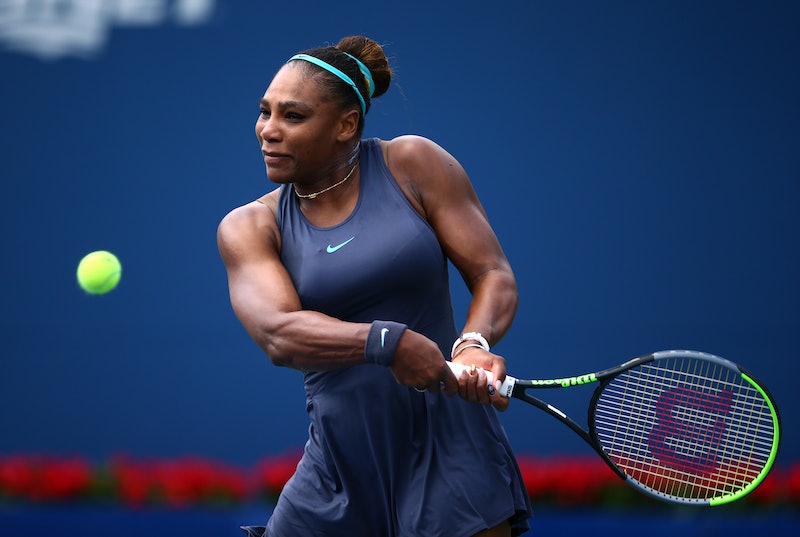 This year's U.S. Open is set to kick off on Monday, Aug. 26. For tennis fans, the annual tournament represents a chance to see their favorite players —including Serena Williams — take to the court in search of a national title. If you're hoping to see Williams and her fellow women athletes make history, knowing how to watch the 2019 U.S. Open will be key. There are lots of ways to tune in, though you may have to pay to do so.

As CNET reported, the U.S. Open tournament is a long one and runs all the way through Sunday, Sept. 8. Coverage of the events will last for around 12 hours each day, from approximately 11 a.m. or 12 p.m. EST until at least 11 p.m. EST, CNET added. The women's final will take place on Sept. 7, while the men's final will happen on Sept. 8. All of the matches will happen at the USTA Billie Jean King National Tennis Center in New York.

ESPN is broadcasting the U.S. Open and you can watch the full tournament by either tuning in to the station on your TV or by streaming it via WatchESPN.com or the WatchESPN app, CBS noted. Unfortunately, all of these services come at a cost. Generally, to watch ESPN, you or someone you know has to have a television subscription with ESPN included — even if you want to livestream the tournament via your web browser or the app. You can also choose to sign up for the ESPN+ streaming service, which costs $4.99 per month and offers a more economical option for viewing the tournament.

If these options don't work for you, you can also consider subscribing to other online television streaming services, many of which offer free trials for certain periods of time. As SlickDeals.net, a large online community that reviews deals and coupons, pointed out, some of these services include Sling TV, YouTube TV, and Hulu + Live TV, among others. You can check out Slick Deals' comprehensive list of these streaming options to see if they might be a good fit for you.

Of course, if you aren't able to access U.S. Open content at home, there are still other ways you can watch the tournament. For example, you can check out local restaurants and bars to see if they are airing any of the matches and head over to tune in. You can also always find out if a friend, family member, or co-worker is a tennis fan — and see if they have access to streaming services and want to watch the tournament with you.

Notably, two major women's tennis stars, Serena Williams and Maria Sharapova, are slated to play each other in their first match of the tournament, CBS 12 reported. This match represents the first time the women have ever played each other in the U.S. Open, so be sure to tune in if you want to see them make history, the Los Angeles Times reported. Sharapova and Williams will play each other on Aug. 26, though officials haven't decided on a match time yet, the paper added. For Williams, France 24 said, the match also kicks off the beginning of her quest for a 24th Grand Slam singles title, which would even further re-affirm her already incredible tennis legacy.

More like this
6 Organizations Fighting Police Brutality That You Can Support Right Now
By Syeda Khaula Saad and JR Thorpe
The 6 Best Sunglasses For Snow
By Lauren Moison
23 Super Sweet Things To Write In A Valentine's Day Card
By Karen Belz and Lexi Inks
Here's How Netflix Should Adapt Prince Harry's Memoir Into A Movie
By Ginny Hogan
Get Even More From Bustle — Sign Up For The Newsletter
From hair trends to relationship advice, our daily newsletter has everything you need to sound like a person who’s on TikTok, even if you aren’t.