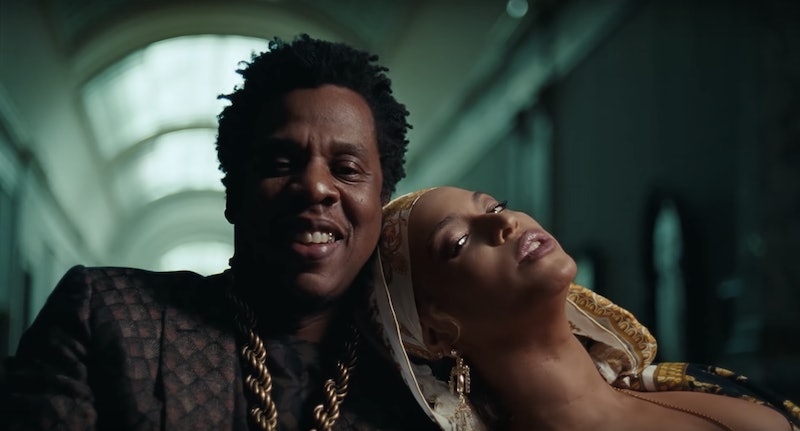 If, like many other people, you were totally shocked that Beyoncé and JAY-Z dropped a joint album called Everything is Love on Saturday night, you shouldn't have been — after all, when have the celebrity couple ever done anything as expected? It's completely in character for the superstars to release an album totally out of nowhere, and of course, it's also completely in character for fans to freak out over the release and start obsessing over every song. Already, people are figuring out how to watch the "Apesh*t" music video in order to fully appreciate the album's, um, interestingly titled second song.

Right now, Everything is Love is currently only available to stream on TIDAL, which is sadly pretty typical for a release by Beyoncé and JAY-Z. That's not totally bad news, though, as although the streaming service normally costs $9.99/month, right now users can get six months of TIDAL for free. So even if you don't have a regular TIDAL subscription, you can listen to Everything is Love for free and enjoy all of its songs — including "Apesh*t".

If you want to watch the music video for that song, however, you don't even need to go on TIDAL. You can check out the "Apesh*t" video on Youtube, where it was uploaded onto Beyoncé's Youtube account on Saturday night. The song's artists are simply called "The Carters", but what's really notable about the video is that it's set in France's The Louvre. Yes, Beyoncé and JAY-Z actually shut down a massively famous and popular museum on a random day in May in order to film their music video.

It's pretty freakin' cool that the musicians filmed the video in The Louvre, likely fully shutting down the museum in order to make it happen. And the video itself is equally captivating, featuring Beyoncé, JAY-Z, a group of dancers, and of course, much of the French museum's famous artworks. Only Bey and Jay would manage to get the Mona Lisa in the background of their music video — seriously, would anyone expect any less from the duo? They're always shattering expectations and going the extra step to make their collaborations as epic as possible.

And naturally, fans are completely obsessed. When the video for "Apesh*t" dropped on Saturday, plenty of people wasted no time watching it and then promptly sharing their reactions on Twitter. Some fans were obsessed with the music video's setting:

Others, meanwhile, had plenty to say about the song itself and Beyoncé's singing and rapping of the lyrics:

And a few people were already feeling pretty certain that no other song on Everything is Love — and perhaps in the rap genre overall — can compete with "Apesh*t:

Clearly, "Apesh*t" and the joint album overall have already made a huge impact on fans. And anyone who's going to see Beyoncé and JAY-Z on their "On the Run II" tour together (lucky...) this summer can bet that new songs from Everything is Love will be debuted, probably including "Apesh*t". So if you haven't already memorized the lyrics, you better get started — you definitely won't want to be that person at the concert not knowing what's going on while everyone is around you is singing along with every word of all the songs. Luckily, the fact that "Apesh*t" is on Youtube makes it all easier, because you can listen to the song and watch the music video as many times in a ow as you want. I mean, come on — it's exactly what Beyoncé and JAY-Z would want.

More like this
Beyoncé’s Special Tribute To Sister Solange Was Both Touching & Hilarious
By Stephanie Topacio Long
Everything To Know About Taylor Swift’s 10th Studio Album, 'Midnights'
By Grace Wehniainen and Jake Viswanath
Everything You Need To Know About ‘Black Panther: Wakanda Forever’
By Bustle Editors
Christian Bale Sang With Taylor Swift & His Daughter Can't Believe It
By Radhika Menon
Get Even More From Bustle — Sign Up For The Newsletter