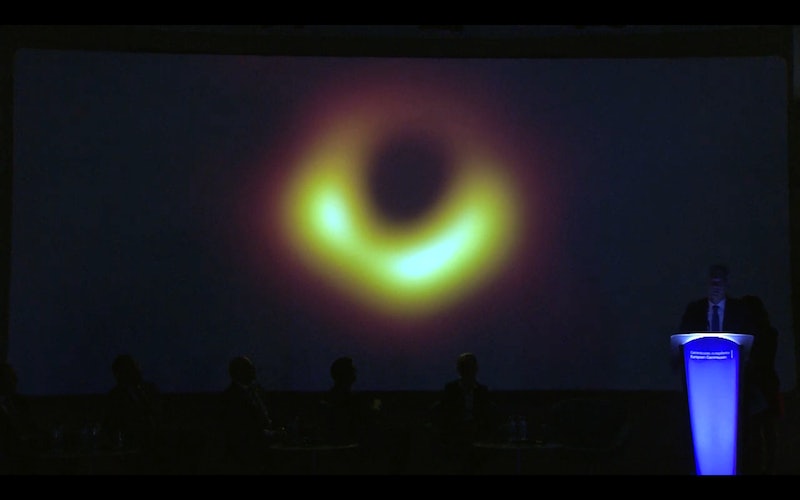 For over half a century, scientists and citizens alike have wondered what a black hole actually looks like. If they really are the vast, swirling voids our imaginations and sci-fi moves make them out to be. Well, wonder no more, because today, scientists live-streamed the first image of a “supermassive” black hole. If you missed the live stream in real time, fear not. We live in a time where we’re able to see the previously unseeable. So, of course you can rewatch the live stream and see the pictures in a more efficient way than going outside and screaming at the sky, “SHOW ME THE BIG, BIG SPACE VOID, YOU COWARDS!!!”

The photos were unveiled this morning (in U.S. time) by the European Commission during an event dubbed a “breakthrough discovery in astronomy.” A YouTube video of the hour-long event is still available in full on the European Commission’s channel. You can see the first ever picture, taken by the Event Horizon Telescope, of the black hole around the 8:20 mark.

The Event Horizon Telescope also tweeted out the picture from its official Twitter account. “The image shows a bright ring formed as light bends in the intense gravity around a black hole,” the tweet explains. The black hole photographed is located at the center of the galaxy M87 and “is 6.5 billion times more massive than the Sun.” As a reminder, the sun is 864,400 miles across and about 1.3 million Earths could fit inside it. “Supermassive” isn’t just a hyperbolic description; the black hole is a big, big boi.

In a prescient tweet, NASA’s official Twitter account reminded us what a black hole actually is: “It’s a place where a large amount of mass has been squeezed into a tiny space. The gravity is so strong that not even light can escape from a black hole.” On their page about black holes, NASA explains that there are three types of black holes: primordial (which is the smallest), stellar (which mid-size and the most common), and supermassive (AKA the big bois).

Giving it a true earthly welcome, Twitter has already meme-ified the black hole. So, before you rush to Twitter to make your space jokes, know that the black hole as has already been dubbed Space Sauron, the glowing orb Trump touched, and a zoomed-in bowl of SpaghettiOs. Please give this big, chonky space hole the respect it deserves.

If seeing a picture of a black hole seems like a big deal, that’s because it is a really big deal. Like, “NASA celebrating Curiosity’s touchdown” levels of big deal. The New York Times even quoted Janna Levin, a cosmologist and professor at Barnard College in New York, saying, “What a time to be alive.”

“Einstein must be totally chuffed,” Priyamvada Natarajan, an astrophysicist at Yale, said, per the Times. “His theory has just been stress-tested under conditions of extreme gravity and looks to have held up.”

Today’s pictures are a culmination of over two years of work across four continents involving hundreds of people. “It’s a visionary project to take the first photograph of a black hole. We are a collaboration of over 200 people internationally,” astrophysicist Sheperd Doeleman, director of the Event Horizon Telescope at the Center for Astrophysics, Harvard & Smithsonian, said in March per CBC.