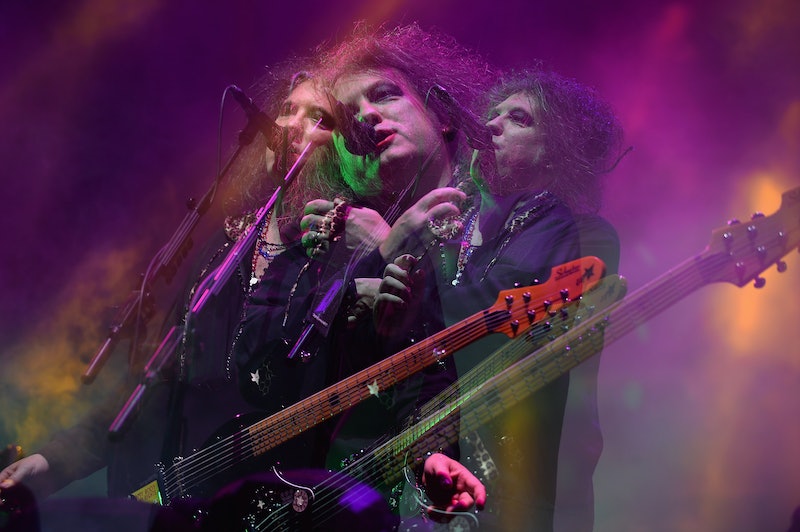 What might just be the greatest festival in the world is back again for another year, after taking 2018 for its quinquennial "fallow year." That means that the excitement's ramping up even more than usual, as Worthy Farm in Somerset is currently opening its gates to festival goers for the first time since 2017. And with a lineup like this one, it's bound to be a momentous return. While there's plenty to come, The Cure will be playing out the festival on Sunday night, so here's how to watch The Cure's Glastonbury performance on TV, because you shouldn't have to miss out on a show from one of the country's most beloved bands.

According to iNews, The Cure will be making their fourth appearance at Glastonbury this year, and they'll be closing out the festival in the spookiest style. Although, they do have The Streets to contend with, with a clash in set times, BBC2 will be transmitting The Cure's set straight to your living room at 9 p.m. on Sunday evening. According to The Sun, the first time the band headlined the festival was back in 1986, following the huge success of their sixth album The Head on the Door, which contains the classic 80s hit "Close To Me."

The Crawley based boys then returned to the festival four years later to headline for the second time in 1990, and the third in 1995. So, while that might make you think that a Glastonbury set from The Cure is just as regular as a fallow year for the festival, that's not the case. In fact, it's been almost 20 years since Robert Smith's lipstick was last seen at Glasto, so their arrival back at the Pyramid stage will understandably cause a lot of excitement.

Despite having a much longer career than Coldplay, after their 2019 performance, The Cure will have headlined Glastonbury the same amount of times as Chris Martin and his boys, according to the BBC. At a total of four points apiece, it's a record for the festival. So, now you have an idea of how truly beloved these "Lovecat" men really are.

The band will get to cover plenty of ground, and there's no doubt you'll hear some of your favourite Cure songs, as they've been designated a fairly generous two hour set time, according to the NME. While that's not quite enough to cover their forty years and 13 albums worth of material, The Cure have come to be known for their excellent, sprawling set lists.

If you want a taste of the hits that you might get to sing along to, then I recommend checking out their latest sets, which you can do by heading to Setlist.fm. Now that The Cure will be returning to one of the world's biggest festival stages, I reckon that it's about time that everyone joins in with Robert Smith, and relives their goth phase once again. For me, that'd be Just Like Heaven.