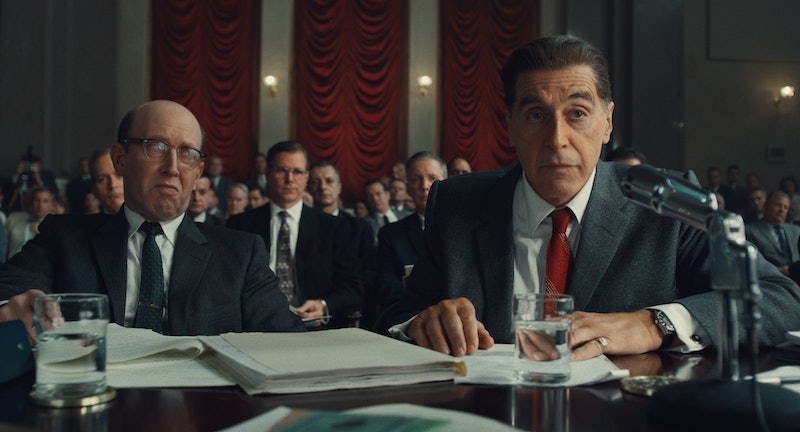 Martin Scorsese's latest masterpiece The Irishman follows the story of Frank Sheeran, the man accused of assassinating union leader, Jimmy Hoffa. The cast of the 2019 crime flick includes the likes of Boardwalk Empire's Bobby Cannavale, Academy Award-winner Anna Paquin, and the one and only Robert De Niro — who is set to appear on The Graham Norton Show to discuss his latest role. However, the film was given a limited cinematic release. So, if you'd like to enjoy the Scorsese epic from the comfort of your own home, here's how to watch The Irishman online.

The Irishman is expected to arrive on Netflix on Wednesday, November 27, and in addition to making its streaming debut, the upcoming film is being released in selected UK cinemas on Friday, November 8. Due to a new deal between the streaming service and Altitude Film Distribution, The Irishman will be available to view in Everyman cinemas across the whole of the UK, however, in response to Netflix's decision to deny the film a full cinematic release, some major cinema chains have opted to boycott the movie.

The film is based in post-World War II America, and follows the story of union official Frank Sheeran, who was accused of assassinating union leader Jimmy Hoffa. The film is presented from the perspective of Frank Sheeran as an elderly man, who reflects on his life with particular focus on the assassination. As iNews reports, The Irishman is based on a true story, and was adapted from Charles Brandt's I Heard You Paint Houses, which accounts Sheeran's career as a professional hitman.

In addition to being Martin Scorsese's first collaboration with Netflix, the film is also the famed director's longest ever project, with an epic runtime of three hours and 30 minutes. Now, following the Oscar-winner's previous releases, including The Wold of Wall Street and Gangs of New York, Scorsese has become known for his lengthy approach to filmmaking, but with his latest masterpiece the director has beaten his own record, and The Irishman has also being named the longest major U.S. release in over 20 years.

During a recent interview, Scorsese's longtime editor, Thelma Schoonmaker, discussed her behind-the-scenes role on The Irishman, and promised that viewers can expect something very different to Scorsese's previous works. Speaking to Yahoo Movies UK, Schoonmaker revealed, "The Irishman is not Goodfellas. And that’s what they think it’s going to be. It’s not. It is not Goodfellas. It’s completely different. It’s wonderful. They’re going to love it. But please don’t think it’s gonna be Goodfellas, because it isn’t."

The Irishman is expected to arrive on Netflix on Wednesday, November 27, and alternatively, you can watch the U.S. crime flick in selected UK cinemas on Friday, November 8.

More like this
Emma Thompson, Lashana Lynch, & Stephen Graham Lead Netflix’s 'Matilda'
By Sophie McEvoy
12 Documentaries & Films About Cults From Netflix UK To Hook You From Start To Finish
By Kay Leong
Dakota Johnson Reveals Why Filming Fifty Shades Was “A Battle”
By Rachel Mantock
The Tragic Reason Elvis Never Toured The UK
By Sam Ramsden
Get The Very Best Of Bustle/UK