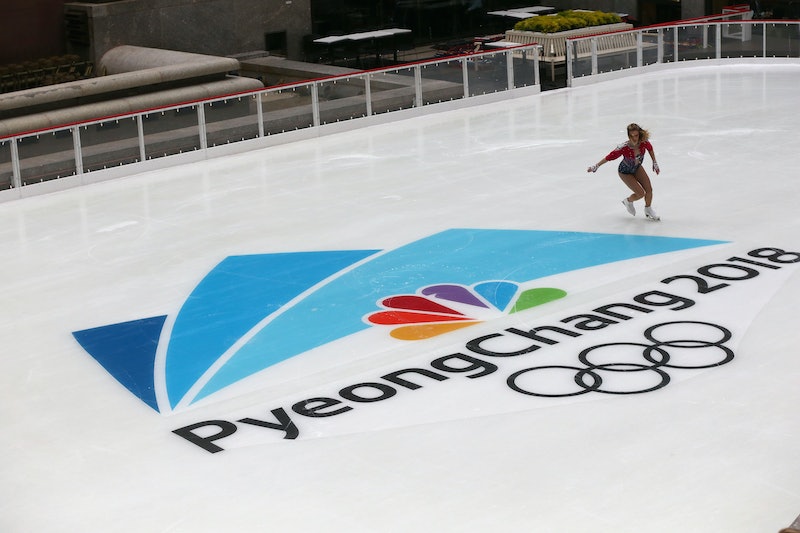 The 2018 Winter Olympics has had no shortage of controversial headlines, but that won't stop viewers around the world from excitedly tuning in. Held in South Korea for the first time, the winter games have attracted international attention due to a ban on Russian athletes and the possibility of North Korea sending athletes as a gesture of peace. Ahead of the opening ceremony taking place on Feb. 9, people are probably wondering when the official games will start and how to watch the Winter Olympics Opening Ceremony.

Staged in PyeongChang, South Korea for the first time, American viewers at home can watch the Winter Olympics through live coverage of the games on NBC.com and on TV. For viewers living in the U.K., the ceremony will be broadcast on both BBC TV, Eurosport, and other digital platforms for viewers who don't have TV. Although no official information on the broadcast of the ceremony has been released yet, Discovery, which owns Eurosport, has the rights to broadcast the Olympics across Europe.

There will also be changes to the opening ceremony itself, specifically regarding the symbolic release of the pigeons. Following an incident at the Seoul games in which pigeons were killed while sitting on the edge of the Olympic cauldron, the winter games will instead light the Olympic cauldron before the pigeons are officially released.

South Korea has hosted the Olympics before, with Seoul having hosted the Summer Olympics in 1988. The competition for the winter games will commence on Feb. 8 and the closing ceremonies will be on Feb. 25.

As for the events themselves, there will also be four new sports added by the International Olympic Committee for this year. The athletes will now be able to compete in big air snowboarding and freestyle skiing, as well as mass start speed skating and mixed doubles curling. Overall, there are 15 Winter Olympics sports available for athletes to compete in.

Ultimately, the road to the Opening Ceremony has not been totally smooth for South Korea. One logistical worry in particular focused on whether or not the arena will be too cold for spectators to show up and sit in for hours on end. While viewers have come to expect snow and ice as part of the winter games, organizers are worried because the main stadium, where the opening and closing ceremonies will be held, lacks a roof. Due to the absence of insulation, the estimated 35,000 spectators could be subjected to freezing winds and temperatures that feel like minus 14 degrees Celsius (or 6.8 degrees Fahrenheit) according to Reuters.

North Korean leader Kim Jong-Un also surprised world leaders when he revealed in early January that he would consider sending a delegation to the Winter Games as a symbolic gesture of peace. North Korea has never participated in an Olympic event held by its southern neighbor but Kim indicated in a speech that he would talk with Seoul on the matter, all the while highlighting his country's nuclear advancement.

"We will work closely with the United States during the process of inter-Korean dialogue," Moon said. "We are confident that this process will help to create an atmosphere of dialogue between the United States and North Korea to resolve the North Korean nuclear issue."

As athletes gear up to watch and participate in the games and political tensions rise between the United States, South Korea, and North Korea over whether or not Kim will send a delegation to the Olympics, it's safe to say that all eyes will be on the Winter Games and Opening Ceremony.