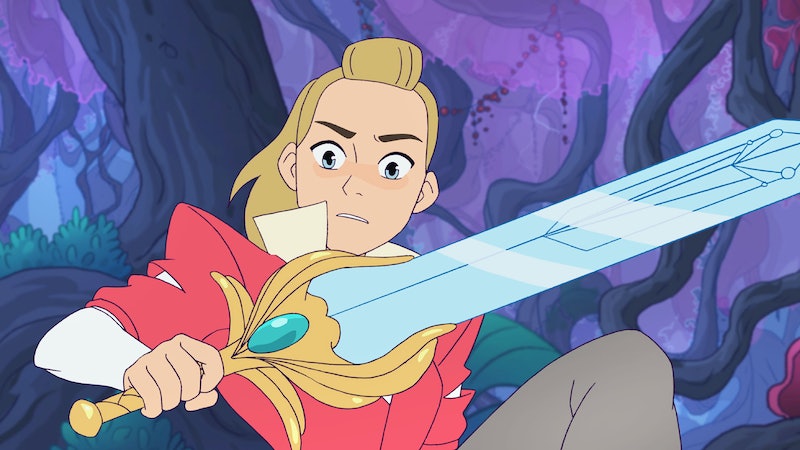 Netflix's latest animated series She-Ra is likely the first time that many of the show's audience has heard the name of Adora or the Evil Horde, but the characters has been popping up in different animated projects since the mid-'80s. New fans who are interested in taking a trip through She-Ra history or old fans who want to revisit the original Princess of Power don't need to go far to stream the original 1985 animated series. The original She-Ra is available for streaming on Netflix, meaning that anyone who is planning on watching She-Ra And The Princesses Of Power already has the means to dive into the original show. While the She-Ra reboot is obviously indebted to the existence of the original She-Ra, fans should expect to see a very different kind of cartoon if they want to watch the original series.

She-Ra And The Princesses Of Power animation style is unmistakably modern, while She-Ra is clearly a product of mid-'80s Saturday morning cartoons. But the origin story behind She-Ra changes from series to series as well. The original She-Ra was introduced to be a new part of the He-Man and the Masters of the Universe franchise, about Prince Adam of Eternia, the boy who becomes He-Man thanks to the magic properties of his Power Sword. In She-Ra And The Princesses Of Power, however, He-Man is not a part of the show's storyline. Instead, while the original series built upon the world introduced in He-Man, the new She-Ra takes fragments of that story and remixes them to its own liking.

While there are plenty of differences between the two, the story at the core of the She-Ra reboot is similar to the original in many ways. Just like the original, She-Ra is set in Etheria and introduces Princess Adora, who becomes She-Ra, as someone that believes themselves to be an orphan, and works with a group called the Evil Horde, led by the villainous Hordak. In the original She-Ra, Adora's connection to her twin brother He-Man helps her see the error of her ways and turn against the Evil Horde, while the new series accomplishes this by learning, for herself, the pain and suffering the Horde has caused.So they're both really similar and also couldn't be any more different from each other.

Luckily, having the opportunity to pour through the entire run of the original She-Ra series, which has a whopping 66 episodes, will make the wait between a possible second season of Princesses of Power go by a lot quicker. From there, fans are also able to watch all of the 65 episodes of He-Man and the Masters of the Universe, also on Netflix.

The ability to stream the original She-Ra series might not appeal to everyone, especially as the standards for quality in animated programming in the '80s pales in comparison to the high quality of today's animated shows, but Netflix has made things easy for those who are interested in visiting or revisiting the series that inspired the reboot.