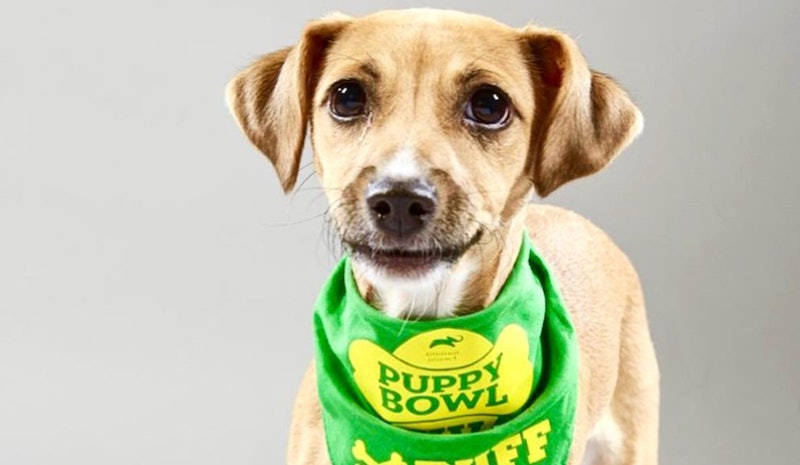 I once stayed up all night to go and watch the Super Bowl at a bar in London. As someone who had never ever watched American football before in my life, it's safe for you to assume I was completely lost for the entire however-many-hours it lasted. And you would be correct to assume that. With this in mind, I will probably never opt to pull an all nighter for the actual Super Bowl again. But the Puppy Bowl? That's something I can get on board with. Keep reading to find out what it's all about, and how to watch the Puppy Bowl in the UK.

Let's begin by explaining what the Puppy Bowl actually is. Put simply, Puppy Bowl is a version of the Super Bowl where the cutest, fluffiest puppies take to the sporting floor instead of NFL stars such as Tom Brady (see, I do have SOME knowledge).

The event sees dozens of rescue pups take centre stage and compete in two teams: Fluff Team and Ruff Team. Cutest thing ever? UH HUH. Officials from Puppy Bowl collect the dogs from rescue organisations or animal shelters across the USA, hence raising awareness for rescue dogs and encouraging viewers to consider adopting a pup. Yep, the whole event is organised for a good cause. According to People, the Puppy Bowl actually has a 100 percent adoption rate for all of their pup participants. How amazing is that?

This year, 93 of the sweetest little dawgs out there will compete (from 51 shelters across the US, Costa Rica, and Puerto Rico), as well as a sloth assistant for referee Dan Schachner, kangaroo cheerleaders and a number of cats in the Kitty Halftime Show. Who needs Lady Gaga or Beyonce when you've got these little guys?

Despite being held in the U.S., there are ways to watch from the UK, luckily for our entire country. This year, you can watch the show on Animal Planet's TV channel or their online live stream. And if all else fails, you can try Animal Planet's YouTube channel, which will also be showing the Puppy Bowl. The event will take place on Sunday 3 February at 3pm ET (U.S. Eastern Time, which is 5 hours behind) so will show here at 8pm. Prime Sunday night viewing, then!

Last year, Team Fluff played their way to glory and won the game, but it's anyone's guess who will prevail in 2019! As well as the winning team being handed the Chewy.com “Lombarky” trophy, the referee will also declare the Most Valued Puppy (MVP) according to which one completed the most touchdowns and who the American public voted for.

This year is the 15th anniversary of the Puppy Bowl, so big things are expected. Both Team Fluff and Team Ruff have won now twice, so this year, it is the decisive vote — and it's personal.

Tune in on Sunday 3 February at 8pm UK time on Animal Planet's website to watch the Puppy Bowl live stream.