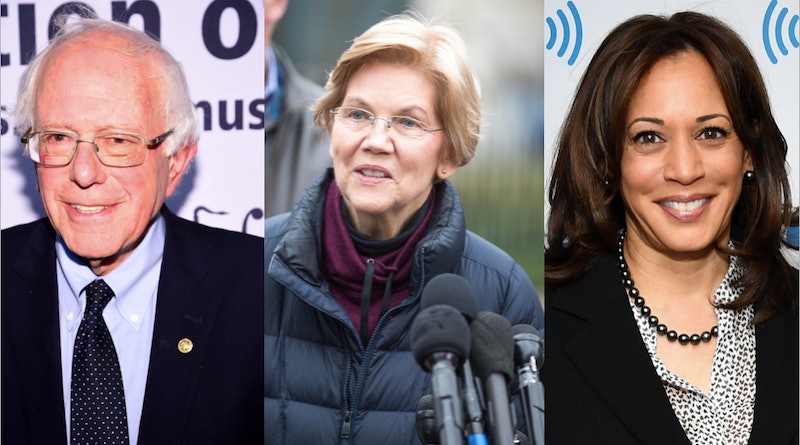 On Wednesday afternoon, Texas Southern University will host eight different Democratic presidential candidates in a forum centered around women of color, reports Houston Public Media. If you're wondering how to watch the "She the People" presidential forum, look no further than the usual social media channels.

"To win in 2020, Democrats will need women of color to vote, organize, and advocate for politics that inspire the new American majority,” said Aimee Allison, founder of She the People, in a press release. “That’s why it’s long past time for a presidential primary forum to focus on the issues that most impact women of color."

If you want to tune into the event, it will be streaming on at least two channels, according to the forum's organizers. One stream can be found on YouTube, the other on the She the People Facebook page. The forum, according to organizers, will begin at 1 p.m. CT. It will last for about three hours.

“We want to change the dynamic that women of color had been taken for granted for decades,” Allison told The Washington Post. “Savvy campaigns understand the role of women of color . . . those are the ones that are positioned to be successful. They are campaigning directly to the most loyal Democrats."

Each candidate will have 20 minutes on stage, where they will address the crowd and take questions, per the Post. The audience will include over 1,000 women of color, according to the She the People event page, "including elected officials and candidates, movement leaders, political strategists, and voters from Texas and other swing states."

Allison told the Post that She the People opted to plan the event early in the campaign as a strategic way to make sure that women of color's voices and concerns were included in the conversation from the very beginning. Forum organizers have said the event will "focus on issues central to the lives and communities of women of color—racial, economic, gender, and social justice issues," per event details available online.

USA Today reports that the forum is the first of its kind. Andrea Mercado, of the New Florida Majority, an organization that partnered with She the People to put Wednesday's forum on, told the Post that she wants candidates to present and be mindful of policies that impact women of color.

“I want to walk away knowing candidates running for president understand that they can’t just count on women of color to turn out voters in record numbers but not have a bold policy proposal to address the challenges that our families face,” Mercado told the paper. “This will be a really important opportunity for us to ask the questions that we need answers to be able to discern which candidates will really fight for our families and our communities.”