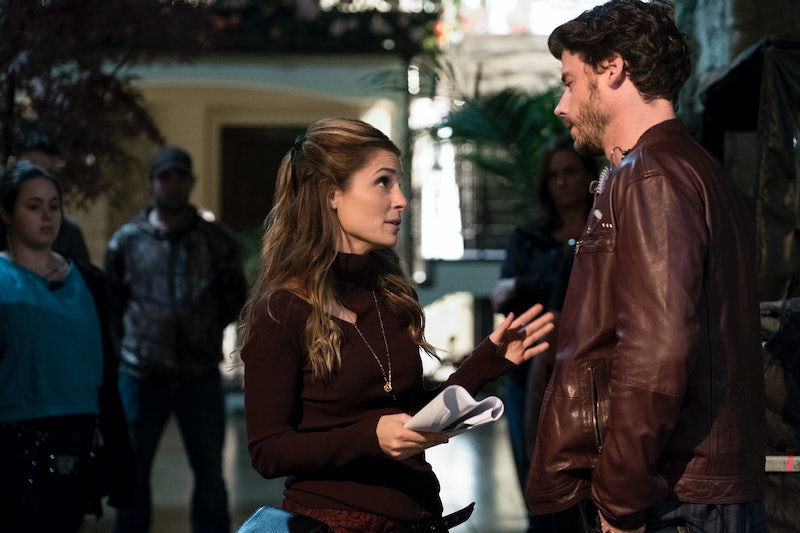 Never has there been a clearer definition for the word "bittersweet" than the fact that UnREAL has been canceled on the same day that its fourth season is released. Luckily, fans can watch UnREAL's final season on Hulu, where the show dropped the final eight episodes of Season 4 on July 16. But not so luckily, it's also being reported that the series has been cancelled, effective immediately. (Bustle reached out to A+E Studios for confirmation, but had not heard back at time of publication.)

Although fans still have UnREAL's final season to enjoy, knowing that the show has met its end is likely to upset viewers. Meaning that it won't be just the suitors and contestants on UnREAL's show-within-a-show Everlasting who are getting emotional this time around; fans will likely be watching the final season through a haze of tears as well.

But while devastating, this news isn't entirely out of nowhere. The series was renewed for Season 4 during summer 2017 on the strength of its third season, which had just wrapped filming. But according to The Hollywood Reporter, once Season 3 began airing to lower viewership than anticipated — about half its Season 2 numbers and down 66 percent from Season 1 — things changed a bit.

In May, it was reported that the fourth season of the Bachelor-lampooning series would air on Hulu before making its way to Lifetime. (Although it's worth noting that neither the streaming platform or the network, nor producers at A+E Studios agreed to comment on the rumored negotiations.) And even more ominously, the season was cut from the standard 10 episodes down to eight, so many outlets were reporting without confirmation that this could signal an end for the beloved series.

That said, as recently as earlier this month, star Shiri Appleby was celebrating the show's "new home" on Hulu with a cheerful tweet on July 3, so the advanced warning clearly doesn't make this any less of a blow.

In fact, the series has been full of surprises lately. According to an interview with Appleby and her co-star Constance Zimmer for Entertainment Weekly, Season 4's surprise premiere and move to Hulu shocked them as well. (Zimmer, who plays producer Quinn King, shared with EW that the cast and crew was given the heads-up a little over a month ago.) With Season 3 finishing up airing in late April, the actors had expected a long wait before new episodes. Zimmer told the outlet:

My first reaction was, "Oh my God, that’s the most amazing news I’ve ever heard!" We were so worried that everyone was going to have to wait another year to see Season 4, which just feels so cruel. But then I was a little sad because, you know, this has been Lifetime’s baby, and I feel like we had such a great run. It would’ve been nice to see it end there, but I get it, and I appreciate that what they were more concerned about were the fans.

And indeed, no matter how wrecked you are by this news right now, the fans are coming out pretty well. In confirming the sad cancellation news on Twitter, Sarah Gertrude Shap — who co-created the series alongside Marti Noxon — reminded fans of the positive as well as the negative. She tweeted on Monday, “Yup. Allll done. Congrats and deepest gratitude to entire team and supporters for a great run. We've loved making this world.” But she also reassured fans that it’s not all bad news, reminding them that Season 4 is available to binge today.

And since Seasons 1 through 3 are currently also available on the streaming platform, that means that every episode of UnREAL that has ever been made or that will ever be made is just a click away on Hulu. And that's good news, no matter what kind of drama is happening in the background.

More like this
Everything To Know About 'Bling Empire' Season 4
By Gretchen Smail
Kevin Kreider Finally Asked Out Kim Lee On 'Bling Empire'
By Brad Witter
Ekin-Su & Davide’s ITV Travel Show Finally Has A Name
By El Hunt and Sophie McEvoy
Holly Willoughby & Phillip Schofield #Queuegate Drama, Explained
By Sophie McEvoy
Get Even More From Bustle — Sign Up For The Newsletter