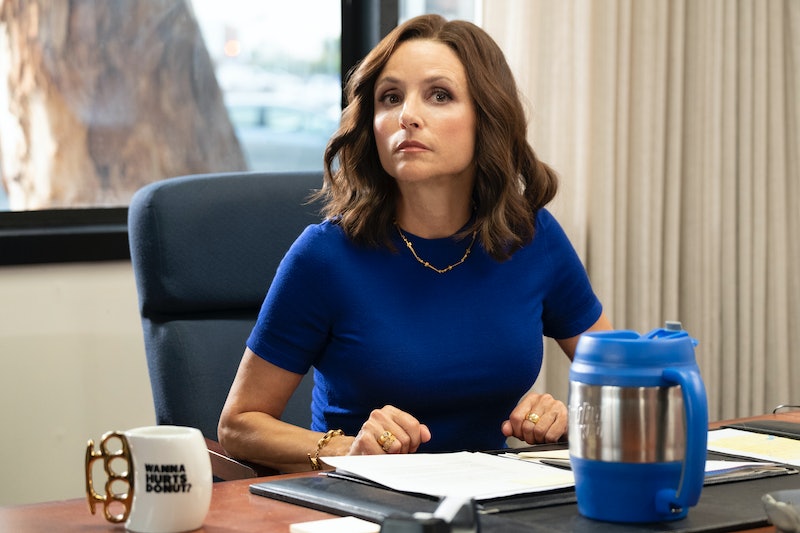 During one of her many acceptance speeches at the 2016 Emmys, Julia Louis-Dreyfus remarked that, after the election of U.S. President Donald Trump, Veep had begun to feel more like a sobering documentary than a political satire. While that may be depressingly true, fans of the hit U.S. comedy still cannot wait for its return, and they're in luck, because the seventh and final season is right around the corner. But how long do British viewers have to wait? If you can't wait to sink your teeth into the new series, here's how to watch Veep in the UK.

According to Digital Spy, the final season of Veep will begin on Wednesday, April 3, at 10.10 p.m. on Sky Atlantic (Sky channel 108) here in the UK. If you'd like to catch up on older episodes of the Emmy-award-winning show, all previous six seasons are available to watch or download on Sky TV On Demand.

"The decision to bring Veep to a close at the end of next season is bittersweet. We love the show and everyone involved but respect the producers’ choice to bring Selina Meyer’s journey to its conclusion after an extraordinary run of critical and award-winning acclaim."

The political comedy series stars Julia Louis-Dreyfus as Selina Meyer, and Veep's executive producer, David Mandel, told Variety last year that the final season will kick off with Selina being "unable to live a civilian and thinking about running [for President] again."

Mandel discussed some of the plot details of Veep's final season with Variety, and noted that the election of Donald Trump did, in fact, affect the way in which the series plays out. He said:

"It's going to be a completely different campaign process now because of [Trump]. We're playing with a lot of those ideas in terms of the future." and went on to add "Forget all of the specifics of what happened with Trump winning and Hillary losing and whatnot — I do think the one thing that came out of it is that people want what they imagine is authentic, and Selina does fake authenticity better than anyone. My hope is there’s something in there to be explored."

Mandel confirmed that series seven will "turn back deeper into politics," and not just for Meyer, but for other characters such as Jonah Ryan (Timothy Simons) too.

Also coming back for the show's final run is Anna Chlumsky, who stars as Amy Brookheimer, the Vice President's Chief of Staff. According to the Express, other returning cast-members include Matt Walsh, Tony Hale, Reid Scott, Kevin Dunn, Gary Cole, and Sam Richardson.

In an interview with Vogue, Louis-Dreyfus said that her character's decision to run for president again "felt like the right place to go with her," and described Selina as "a rageful human being" who has "been thwarted her entire life."