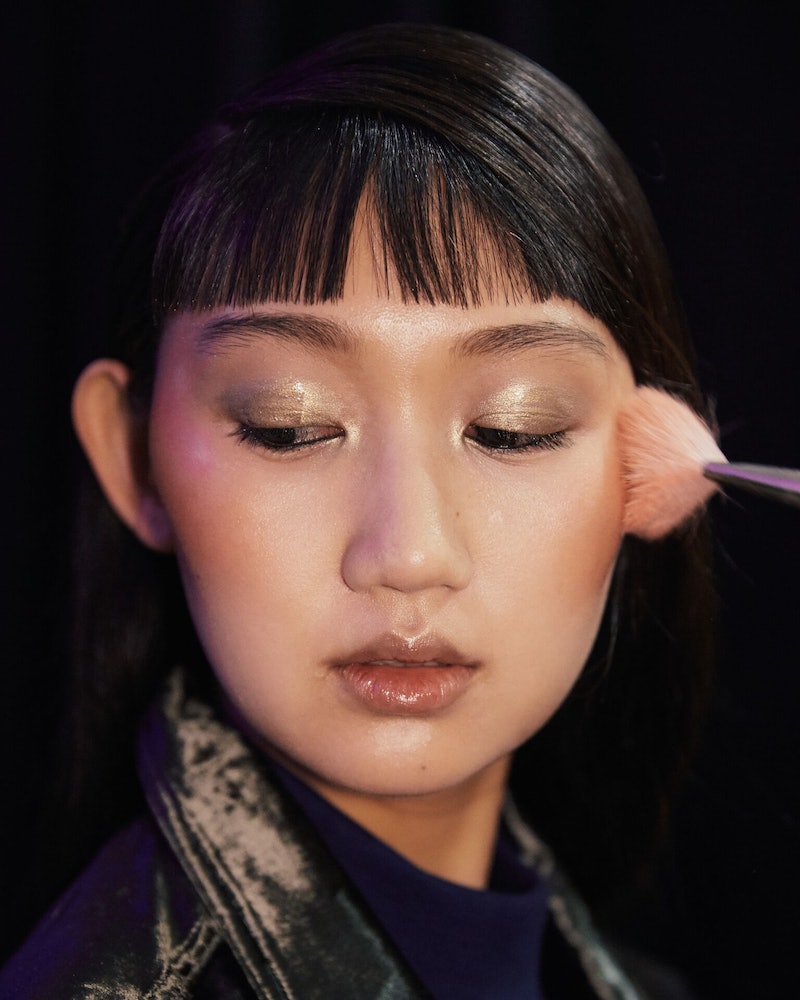 In case you haven't already noticed, metallic everything is in. From our manicures to our highlight, it seems like gold, silver, and bronze hues are beaming from every direction. That definitely was the case at Opening Ceremony's Fall 2017 presentation in Los Angeles on Friday, June 9. Models took the stage wearing the most beautiful golden eye created by makeup artist Yadim and Maybelline. While metallic eyeshadow can be pretty intimidating for those who are uncomfortable with bolder hues, this look is the perfect way for beauty newbies to try the trend and make a subtle makeup statement.

Backstage at the show, Yadim tells us that the entire look was meant to be "a bit desert nymph," as though the models were out in the sun for a little too long and looked windswept, but sexy. "It's very natural and a lot of girls can wear this... it's also very in line with festival makeup. It's very earthy, and the skin was kept very natural," Yadim says.

For the base of the look, Yadim used Maybelline New York Dream Cushion, which he tells us he is obsessed with. "It's actually a wet, cushion-y [foundation] that stays really dewy and sheeny, and looks really beautiful," he says. Yadim only used a little bit of concealer around the eyes and nose, as he wanted the natural redness of the models to come out and give that sun-kissed effect.

For the cheeks, Yadim mixed lipsticks to create a creamy, bright blush. He used Vivid Matte Lipstick in Orange Obsession with Inti-Matte Nudes Lipstick in Honey Pink and applied the mixture from the cheekbone to the temple. He blended bronzer from the FaceStudio Master Contour Palette over the blush and used the orange/pink shimmer in the new City Mini Downtown Sunrise Eyeshadow Palette as a highlighter.

While I loved the bright orange cheek on the Opening Ceremony models, my favorite part of the entire look was, of course, the gold statement eye.

Here are the exact steps Yadim took so you can recreate this metallic look at home.

1. Create A Taupe Base To Cover Your Lid

2. Line Your Waterline With Black Pencil

Next, use a black pencil inside the waterline, but only the waterline. "It's meant to be quite strict in the waterline," says Yadim. He used Eyestudio Lasting Drama Waterproof Gel Pencil in Onyx.

3. Apply Gold Eyeshadow With A Wet Brush To Create A Metallic Finish

Apply the gold shade in the 24K Nudes Eyeshadow Palette to the inner corner of the eye using a wet brush for an intense metallic finish. Yadim says the eyeshadow becomes a lot more metallic when you do this. Also, don't worry about making it look perfect. "It's meant to be a bit rough and painterly."

4. Curl Lashes & Brush Your Brows Up

Yadim tells us he wanted to keep everything "very fresh" to make it feel modern.

5. Apply Baby Lips Over The Lid

The finishing touch? Baby Lips Lip Balm. Apply the balm all over the lid to create a dewy texture.

If you're worried about your eyeshadow creasing, Yadim suggests using a primer. However, he also has some other words of advice to keep in mind. "Don't fight it — the the whole crease thing is kind of cool," he tells me. "I think you put grease in your eyelids to make you look a bit more rocker rather than be the perfect, pristine girl. Makeup is great when it's lived in and worn in. To me, makeup is always best after a night out. People relate to that more now anyway than perfect, pretty beauty counter makeup."