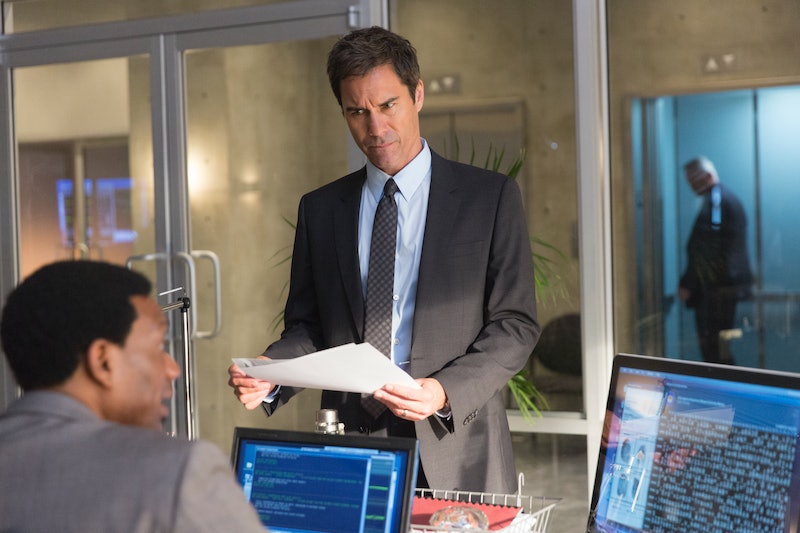 Netflix has another original series for users to marathon come Dec. 23 and it stars one of the most famous actors from still beloved NBC sitcom Will & Grace. Obviously, I'm talking about Eric McCormack, who is one of the five main leads starring in Travelers, a series that contains both sci-fi and time travel vibes. Though, if you're worried that there are just too many similar series' out there, Eric McCormack says Travelers isn't your typical time travel series.

While chatting with Bustle, McCormack says about Travelers in comparison to other time travel and sci-fi series, "It doesn’t really compare hardly at all. It takes place now. The only real sci-fi conventions that we see are the actual way we get here to the present and take over people's lives in a kind of infiltrating way as spies."

The series follows a group of five travelers who are transported from 300 years in the future to the year of 2016. They are the last surviving humans, who discover a way to send consciousness through time, directly into people in the 21st century. These travelers are essentially inhabiting other people's bodies and even living their lives in order to save humanity from a dismal future, all while trying to prepare themselves with knowledge from history itself and an archive of social media profiles.

As McCormack notes, these travelers are acting more like spies, which turns the show into more of a spy-like thriller. He explains,

"Other than that, it becomes more like a Jason Bourne kind of story, becomes more like The Americans. The real jeopardy all the time is not so much the missions we’re carrying out, but the possibility that at any moment somebody’s going to recognize that we’re not who we say we are. The future depends not just on those carrying out our jobs, but us keeping us a secret because it could all go to sh*t if we don’t."

Despite loving the 1979 film Time After Time starring Malcolm McDowell and David Warner as a child, McCormack doesn't consider himself "a huge sci-fi guy." Though, the fact that Travelers is more about the travelers themselves rather than the sci-fi and time travel aspect seems to be what attracted the actor to his role.

Throughout the 12-episode first season, the five-time Golden Globe nominee plays a traveler who inhabits the body of FBI Agent Grant MacLaren. Though, unlike his co-stars, McCormack actually gets to play the man of the body his traveler inhabits. In the first episode, McCormack is MacLaren and in the remaining episodes, he is the traveler inside MacLaren's body. Basically, he had the opportunity to play two different characters. As you can imagine, it was fun for McCormack, especially since there are times when he gets to once again channel his comedic side.

"For all the characters, they have these comic moments where they have to contend with sort of stuff that no amount of research could’ve set them up for," he says. For example, McCormack's traveler has never eaten meat or ever tasted cow's milk, but MacLaren loved both of those things. To watch that play out provides a comic element to a series that is pretty serious and sometimes dark.

As viewers get to know the travelers and the lives of the people they inhabit, so are the travelers themselves. "In my case, in the second episode, I realize I have a wife who I’ve never met," he reveals. "That becomes a big piece of my puzzle. My FBI partner starts to realize I’m not doing everything the way I used to do it. We’re all sort of in jeopardy at all times that we’re not going to be able to pull this off."

When it comes to time travel itself, Travelers has its own set of rules. So, if fans of The Flash, Timeless, and even Quantum Leap are hoping for something along similar lines, it's best to reset your time travel knowledge.

Unlike the previously mentioned series', these particular travelers cannot jump from timeline to timeline or decade to decade or body to body. Once they've chosen their destination, there's no going back. As McCormack explains, "The missions that they’re carrying out are to improve [the future]. Travelers are soldiers and it’s really only a one-way ticket. They’re not going home."

He says they're OK with that, as well, because they're set on completing a mission, even if that means becoming wrapped up in the lives of the people they've inhabited. "That’s where the show lives is that when we land in the body and in the life of the person we’ve been assigned to that’s it, that’s who we are until that person dies, and that could be 30 years," McCormack says.

Speaking of these travelers' mission, they are going into 2016 with direction from a larger force. "The key is that there is nothing that we do that hasn’t been planned by a much bigger plan," McCormack notes. "You’ll discover in the second episode that we are being led by somebody called The Director. Everything we’re doing is part of a much larger algorithm that dictates the series of events that either have to happen or not happen or change in 2016 in order for the future to not be as dismal as it is."

Don't worry, they also won't be pulling a Barry Allen from The Flash and creating a Flashpoint timeline. McCormack says the travelers "can't just change anything" that they want to. "We can’t suddenly kill somebody that wasn’t meant to be killed," he clarifies. "We actually can do no harm."

It seems like these travelers will also be relying on each other throughout their time in 2016. After being asked if these five individuals are related or if any are romantically involved in the future, McCormack teases, "Both of those are very possible. I can’t tell you those. Those are the things that will be discussed in the course of the season." However, he does unveil, "But, the one thing for sure is the five of them trained together as a team. So, they knew each other probably the way soldiers know each other after basic training."

He also promises that viewers will get to learn more about each individual traveler throughout the season, but their true physical identities will never be unmasked. "We’ll never really know what they actually look like in the future, but we’ll definitely learn more about them and what they left behind, who they love," he teases.

McCormack hopes people will take the time to tune in, especially since it is so different from other time travel projects. "I don’t think there will be a single disappointment." He adds, "I think people want something different. I think the very reason that this pilot is so strong is because it’s not all what you think it’s gonna be." What more reason do you need to watch?

All 12 episodes of Travelers debut Friday, Dec. 23 on Netflix.