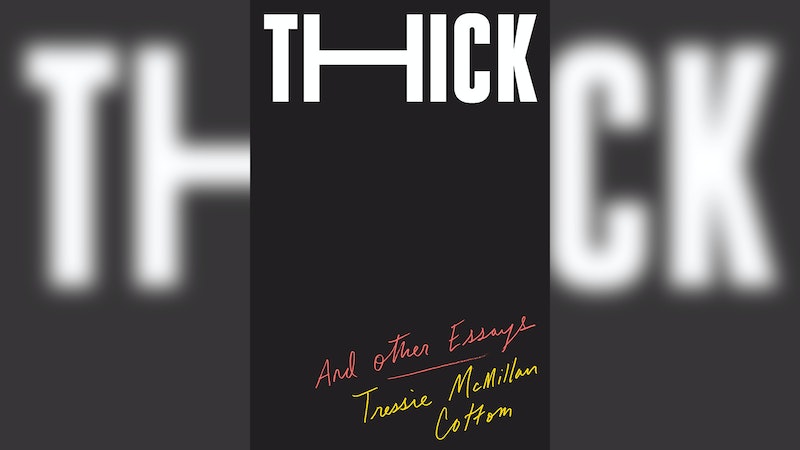 Before reading Thick: And Other Essays, I was looking for ways to articulate my body positivity burnout. It’s hard not to roll your eyes at mainstream discussions about body image that only seem to occur at the hands of celebrities and companies vying for attention and profit. As a size-16, Black woman, I always felt restricted by language of body positivity that constantly informed me that I was “curvy” not “fat,” “beautiful in my own way” and used other condescending courtesies meant to make me feel good about myself. As much as these statements attempt to erase the beauty hierarchy, they acknowledge the capital in being beautiful — or at least believing you can be. In reality, they deny women like me a sense of vulnerability and honesty about the way society treats us.

In her collection of thought-provoking essays, Dr. Tressie McMillan Cottom explores a range of topics, from the failure of LinkedIn to the presumed incompetence of Black women as medical patients. A throughline in all of her observations is the innate difficulty Black women experience in institutions that aren’t designed for them. In one of the most incisive essays I’ve ever read, McMillan Cottom names beauty as one of these institutions. It’s a challenging opinion that took multiple reads and a lot of mental unpacking, but it ultimately affirmed my years-long refusal of the body positivity jargon being thrown at me.

Despite all we know about the centuries-long racism built into Western models of beauty, it is both provocative and unsettling for a Black woman to publicly assert that she is unattractive...

The essay "In The Name Of Beauty" begins as McMillan Cottom recalls a time she pissed everyone off: Back in 2013, when Miley Cyrus was sporting grills and twerking in teddy-bear costumes, she wrote an article for Slate about the pop star’s use of Black women in her infamous 2013 VMAs performance. In discussing the systemic mistreatment of Black women’s bodies, McMillan Cottom, a dark-skinned Black woman, referred to herself as unattractive, writing:

”I am not beautiful. I phenotypically exist in a space where I am not usually offensive-looking enough to have it be an issue for my mobility, but neither am I a threat to anyone’s beauty market. There is no reason for me to assume this pattern of behavior is a compliment. What I saw in Cyrus’ performance was not just a clueless, culturally insensitive attempt to assert her sexuality or a simple act of cultural appropriation at the expense of black bodies. Instead I saw what kinds of black bodies were on that stage with Cyrus.”

Her assertion sparked backlash online and in-person; frustrated Black people and well-meaning white women criticized her, insisting that she was, in fact, beautiful.

Despite all we know about the centuries-long racism built into Western models of beauty, it is both provocative and unsettling for a Black woman to publicly assert that she is unattractive, not because of some physical deformity or excessive weight but because, simply, she is a Black woman. Much of this discomfort comes from the fact that Black women have put so much effort into creating our own model of beauty, one that is compatible with the Black body, to validate our aesthetic in the face of hatred. From the Black Is Beautiful movement of the '60s that promoted our natural hair and deep skin tones to today’s more granular approach to beauty that includes having laid edges, defined eyebrows, a contoured face, acrylic nails and almost any hairstyle so long as it looks polished and sleek, Black women have made beauty more accessible for anyone who is non-white and even influenced what many modern white women attempt to look like today. But that doesn’t mean this model is entirely inclusive. In a conversation with writer Roxane Gay at the Hammer Museum in February, McMillan Cottom noted that Black standards of beauty are still “a particular embodiment” and a “certain version of femme presentation” that are designed to exclude. Beauty only works if someone is not.

'Thick: And Other Essays' by Tressie McMillan Cottom
Amazon

McMillan Cottom argues that in calling herself “the antithesis of beauty” she is not engaging in self-hate; neither is she legitimizing the standards of beauty that have been decided by white men. “When I say that I am unattractive or ugly, I am not internalizing the dominant culture’s assessment of me,” she writes. “I am naming what has been done to me. And signaling who did it.” The who is white supremacy.

But there’s still a popular belief, guided by the principles of body positivity, that everyone is beautiful or can achieve beauty. We’re defensive about it. We all want a slice of that capital.

She compares this incident to the response comedian Leslie Jones received online after her controversial Weekend Update skit on Saturday Night Live in 2014, in which Jones, who jokes excessively about being single, banters about how much better her love life would’ve been “back in the slave days.” She calls herself a “mandingo” and claims that “massa would’ve hooked [her] up with the best brother on the plantation.” Twitter users immediately criticized her insensitive referencing of slavery and the systemic rape of Black women, but McMillan Cottom saw the injury beneath Jones’ routine, as she accurately described the historical and prolonged degradation of Black women in United States. She writes:

“Where others saw insult, I saw injury. The joke was not on enslaved black women of yesteryear but on the idea that it would take a totalizing system of enslavement to counter the structural violence that beauty does to Jones in her life today.”

Beauty is a global economy and a vital component in industries not directly related to it. But it’s not something progressive women and men want to believe is completely constructed. It’s easy for us to acknowledge the standards of beauty that exist, say, on a Victoria’s Secret runway and the way these narrow ideals can harm women’s self-esteem. But there’s still a popular belief, guided by the principles of body positivity, that everyone is beautiful or can achieve beauty. We’re defensive about it. We all want a slice of that capital.

“Black women have worked hard to write a counternarrative of our worth in a global system where beauty is the only legitimate capital allowed women without legal, political, and economic challenge. That last bit is important. Beauty is not good capital. It compounds the oppression of gender. It constrains those who identify as women against their will. It costs money and demands money. It colonizes. It hurts. It is painful. It can never be fully satisfied. It is not useful for human flourishing. Beauty is, like all capital, merely valuable.”

McMillan Cottom challenges her readers to understand beauty as a capitalist and white supremacist structure that is, therefore, inherently inaccessible for non-white people. She points to feminist analyses of beauty standards over time, most notably Naomi Wolf’s The Beauty Myth, which women of color are excluded from simply because beauty, as a Western concept, was not designed for us. This isn’t to say that Black women and women of color can’t be beautiful to themselves or within their own communities or even span outside of them under certain conditions. Just as McMillan Cottom talks about experiencing desirability and acceptance at her historically Black college, I find comfort in similar, all-Black environments. Still, we’ve all bought into same system where beauty is a form of power and that power is oppressive.

I’d be lying if I said I was a beauty abolitionist who rejected makeup, wigs, weaves, diets and all other ways we adorn and alter ourselves. McMillan Cottom posits that we’re all somehow complicit. But having read her work, I feel affirmed in acknowledging and, more importantly, speaking aloud the pain it is being in a plus-sized Black woman’s body sometimes. I’m not swimming in self-hate. I love myself very much and so do others. But society has to stop regulating the emotions of black women and, instead, listen when we describe the violence white supremacy has inflicted on us.

More like this
Prince Harry Incorrectly Recites Christina Aguilera’s “Genie In A Bottle” Lyrics
By Jake Viswanath
Instagram & Facebook May Finally Lift Their Notorious Nudity Ban
By Allie Fasanella
We’ve Entered The Hot Boy Reader Era
By Samantha Leach
Netflix Shut Down 'Bridgerton' S3 Rumours About A “Very Dark” Storyline
By Bustle
Get Even More From Bustle — Sign Up For The Newsletter
From hair trends to relationship advice, our daily newsletter has everything you need to sound like a person who’s on TikTok, even if you aren’t.