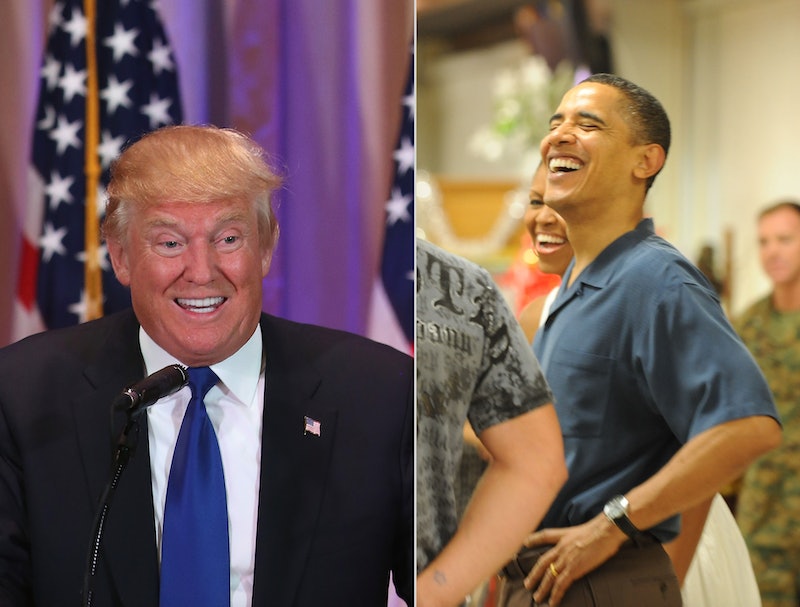 When he rang in 2018, Donald Trump ushered in a new era of presidential New Year's celebrations. While former President Barack Obama usually opted to quietly spend Dec. 31 either at the White House or in Hawaii, his successor celebrated with a rockin' good time at his Florida resort. How Trump celebrated the New Year vs. Obama while in office underscores their flashy and reserved personalities, respectively.

If a deal is reached to end the partial government shutdown when members of Congress return this week, Trump may be able to join the planned festivities at his Mar-a-Lago club. He was scheduled to be in Florida for 12 days, arriving on Dec. 21 and leaving on Jan. 6. But after the president doubled down on his demand for funding for his border wall, his departure was paused indefinitely. So whether Trump will go to Florida at all is unclear. Bustle has reached out to the White House for comment on Trump's plans.

Last year, Trump spent New Year's Eve at Mar-a-Lago with a private party that cost $600 for club members and $750 for guests. This year, the price of entry for the party is even higher. Tribune News Service reported that members now have to pay $650 and guests $1000 for the chance to ring in the New Year at the president's resort. And that's not including tax and gratuity.

Last year marked Trump's first New Year's Eve as president, and he reportedly made a comment to the guests on the red carpet that 2018 would be a "a tremendous year." Treasury Secretary Steven Mnuchin, Fox News host Lou Dobbs, and Melania Trump's parents were all in attendance at last year's party.

Trump also celebrated on Twitter, posting a video that boasted about his success in office. "What a year it’s been, and we’re just getting started," Trump wrote at the time. "Together, we are MAKING AMERICA GREAT AGAIN! Happy New Year!!"

Later that afternoon, he tweeted out another, more dramatic message. "As our Country rapidly grows stronger and smarter, I want to wish all of my friends, supporters, enemies, haters, and even the very dishonest Fake News Media, a Happy and Healthy New Year," Trump wrote. "2018 will be a great year for America!"

All of this is very different from how Obama marked the holiday while he was in office. He quietly celebrated the New Year either at the White House or with his family in Hawaii. At the end of his first year in office in 2009, Obama spent the holidays in Hawaii with no scheduled public appearances.

He did share a New Year's message at the time that was recorded in advance before he left Washington. "While 2009 was difficult for many Americans, we must also look back on this year with the knowledge that brighter days are ahead of us — that although our challenges are great, each of us has the courage and determination to rise up and meet them," Obama said in that video.

Obama's low-key New Year's Eve celebrations were a near-constant throughout his presidency. One of the more eventful moments was when he signed a controversial defense bill on New Year's Eve, thereby ensuring that the news wouldn't attract as many headlines. Trips to Hawaii were frequent as well; one New Year's Eve, the family went snorkeling.

During his last year in office, Obama commented on the importance of spending such holidays with family. "Ring in the new year with the one you love," he tweeted in 2016. The tweet featured a photo of him and his wife Michelle smiling at the White House.

Their celebrations may have been different, but Trump and Obama each chose to spend New Year's how, and with whom, they pleased.