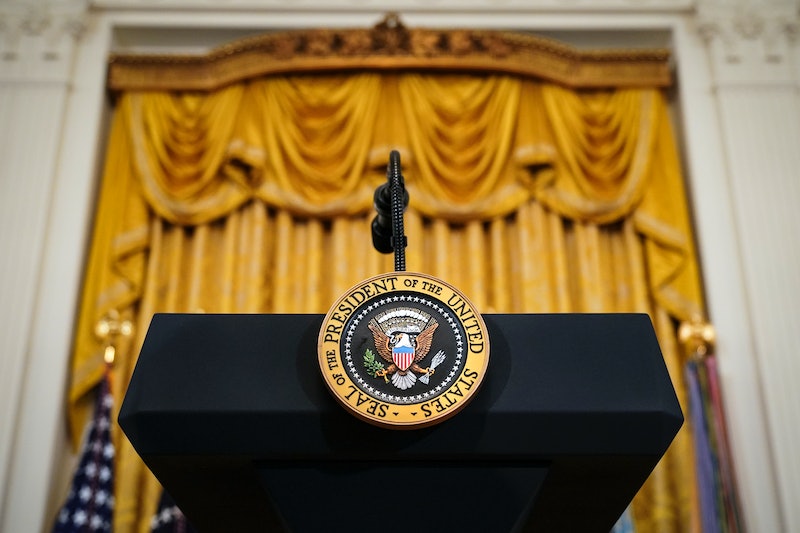 Since Nancy Pelosi announced Donald Trump’s impeachment inquiry, the House of Representatives has been trying to take it to the next level. Democrats are investigating the Trump administration in order to move the needle from “inquiry” to “articles of impeachment,” the next step in the process of firing a president. And according to two women who worked on investigations of former presidents who faced impeachment, those representatives need to find enough to convince members of Congress on both sides of the aisle that Trump should be fired.

Determining what actually qualifies as an impeachable offense is ultimately up to Congress. “It’s a question that is open to interpretation,” says Jill Wine-Banks, who worked as an assistant special prosecutor on the impeachment case of Richard Nixon in 1973. An impeachable offense “is anything that Congress deems to be a danger to America.”

Trump’s penchant for misinformation had some Democrats calling for impeachment since his first year in office, but it took his now notorious phone call with Ukrainian President Volodymyr Zelensky to push Pelosi over the edge and call for the start of a formal inquiry. According to Kimberly Wehle, a law professor at the University of Baltimore and author of the book How to Read the Constitution, Trump is setting a dangerous precedent that could have lasting effects on American democracy.

On Sept. 19, The New York Times broke the story that a whistleblower from inside the intelligence community had a “potentially explosive complaint” involving the president. The following week, Trump released a summary of his call with Zelensky, where he asked the leader to “look into” his political rival, former Vice President Joe Biden.

“I don't think it actually is more extreme than the Russia allegations, but it's more straightforward and easy to understand,” says Heather Hurlburt, a policy expert in the political reform program at New America, a centrist think tank in Washington, D.C. That straightforwardness was key, and it’s what gave Pelosi the political confidence to pursue impeachment after months of hesitation.

"The Constitution designed this as an inherently political process, which I think has been really frustrating for a lot of people."

People have been comparing Trump to Nixon since long before the impeachment inquiry began. Wine-Banks, now a legal expert and author of the book The Watergate Girl, was the only woman on the trial team for the obstruction of justice case against Nixon’s top aides. According to The New York Times, Nixon was named as an unindicted co-conspirator in that case for attempting to cover up the burglary of the Democratic National Convention's Watergate office. For her, Nixon and Trump share one key trait that’s making this impeachment process feel a lot like the Watergate scandal: believing that the president is above the law.

“Nixon did, and Donald Trump clearly does,” Wine-Banks says. “He has gotten away with all of this all his life. He walks away from it.”

When it comes to the question of what it will take to move forward with the impeachment process, however, it’s all up to Congress. Wehle, a legal expert who worked on the Whitewater investigation looking into former President Bill Clinton's involvement in the funding of a failed real estate venture in Arkansas, says Trump’s impeachment case is different than previous ones. In Watergate, a special counsel was appointed to investigate allegations against the president. “Here, Congress has to do the evidence gathering themselves,” Wehle says, and the stakes are high. At risk is a healthy democracy, one “where people in power don't have unlimited ability to abuse their power.”

House Democrats need to gather enough evidence to convince the rest of Congress that Trump’s attempt to influence an election with the help of a foreign power is impeachable, but the administration isn’t making the impeachment inquiry easy. It is outright refusing to comply with Congress-issued subpoenas. According to Wehle, while Nixon also failed to comply with subpoenas, this level of noncompliance is unprecedented, and it’s another way Trump’s White House is threatening checks and balances. Pelosi herself even said Trump is trying to “normalize lawlessness” in an Oct. 8 statement on the White House's disregard of subpoenas.

To generate the formal articles of impeachment, or the list of charges against Trump, a simple majority of the House needs to vote to proceed. While the House can take the impeachment inquiry to a vote at any time, Pelosi is biding her time to make sure that there is enough irrefutable evidence to actually convince the public. If supporters of Trump in the Senate, which acts like the jury in impeachment cases, aren’t convinced by the facts, the next best thing is for them to be convinced by their constituents, Wehle says.

“The Constitution designed this as an inherently political process,” Hurlburt says, “which I think has been really frustrating for a lot of people.”

Wine-Banks is hopeful, however, that even Trump-supporting Republicans will recognize how refusing to comply with congressional subpoenas is a huge violation. “I absolutely believe that there is hope that the Republicans in the Senate and in the House realize that the evidence is real,” Wine-Banks says, “and that it proves criminality and impeachable offenses that endanger our country.”

Wehle and Wine-Banks agree that Trump’s presidency, and his administration's refusal to comply with subpoenas, might end up setting a precedent for the executive branch to act outside the law.

“This is about whether we have three co-equal branches of government,” Wehle says. “If Congress is basically hamstrung and weakened to the point where they can't function, then we've got unlimited power in the office of the president.” That, Wehle says, would lead to what she calls an “imperial presidency.” She compares Trump to a driver speeding on the highway and getting away with it.

Correction: A previous version of this article misstated Heather Hurlburt's title. It has been updated to include the correct information.