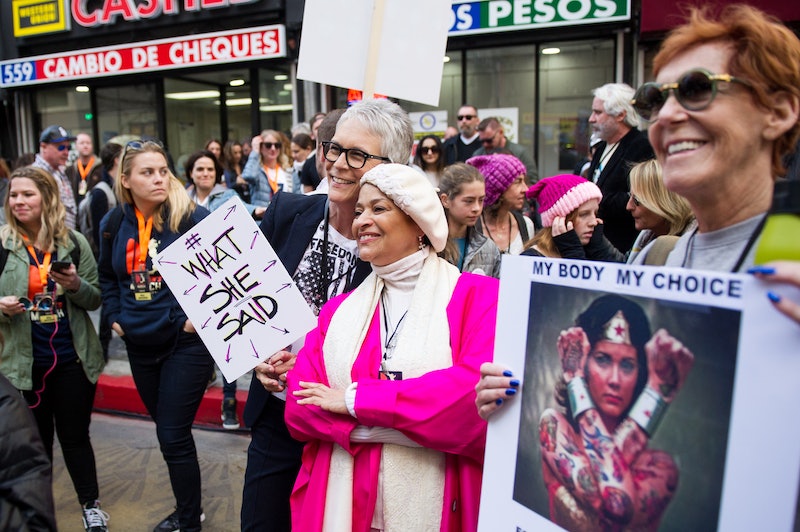 For those already concerned about the state of reproductive rights under the current administration, the Religious Liberty Order that Donald Trump recently signed provides yet another threat to accessible health care for women. While Trump and proponents of the order claim it is a means of upholding freedom of religion, critics argue that it is a government-sanctioned way to discriminate against women.

Trump first signed the executive order on the National Day of Prayer, May 4, in the White House Rose Garden surrounded by Mike Pence and a handful of religious leaders. Then, on May 23, the White House Department of the Treasury released an updated draft of the portion of the Religious Liberty rule that would target birth control coverage.

Trump described the Religious Liberty Order as a move to "defend freedom of religion and speech in America." However, according to reproductive rights and women's health advocates, this order may place a devastating burden on low-income women in the workplace in need of birth control and reproductive health care coverage, which lies far outside the purview of actual issues of religious freedom.

The second directive instructs federal agencies to allow religious employers to rollback birth control coverage for employees, under claims of religious conviction. While Trump laid this policy out as an extension of religious freedom, the realities of this directive may enable discrimination against women in the workplace.

Joyce Schorr, the president of WRRAPP (Women's Reproductive Rights Assistance Project), an organization that provides women with funding for birth control and abortion, tells Bustle that in her opinion, "religious freedom" is being exploited to target women's health care.

"This is one set of rules by one set of Christians. There are over 200 denominations of Christianity. There are plenty of pro-life and pro-choice Christians, so this isn’t even a thinly veiled attack on women’s reproductive rights," says Schorr. "We have women who work full time. but still don’t get birth control coverage. Then they don’t have enough money to pay for abortions because of low wages. This is an all out attempt to force women to give birth, especially poor women."

The president of NOW (National Organization for Women), Terry O'Neill, points out the inconsistency in taking away birth control from women yet allowing men to take Viagra for recreational purposes. This inconsistency, she tells Bustle, proves the rule is not about promoting religious freedom, but rather, bent on restricting women's health care access.

"What Mike Pence does is goes against women specifically. It’s also a sin in the Catholic Church for men to take Viagra for anything other than procreation, but you don’t see Mike Pence trying to criminalize men for taking Viagra or getting vasectomies," O'Neill says. "He’s not enforcing his religion, he’s only enforcing policies against women."

In an email to Bustle, the national communications director for NARAL Pro-choice America, Kaylie Hanson Long, writes that it is undeniable that the Religious Liberty Order explicitly targets women"

The Trump administration has made it no secret that they want to take away the rights and freedoms of anyone who doesn't agree with their dangerous ideology, including women. This time, they're doing it without any opportunity for debate, effectively silencing millions of women who rely on this benefit.

However, Long stresses that NARAL — and its reproductive rights allies — are determined to fight back: "NARAL members are engaging in a proactive resistance in their own backyards to protect women from these truly offensive actions by the Trump administration."