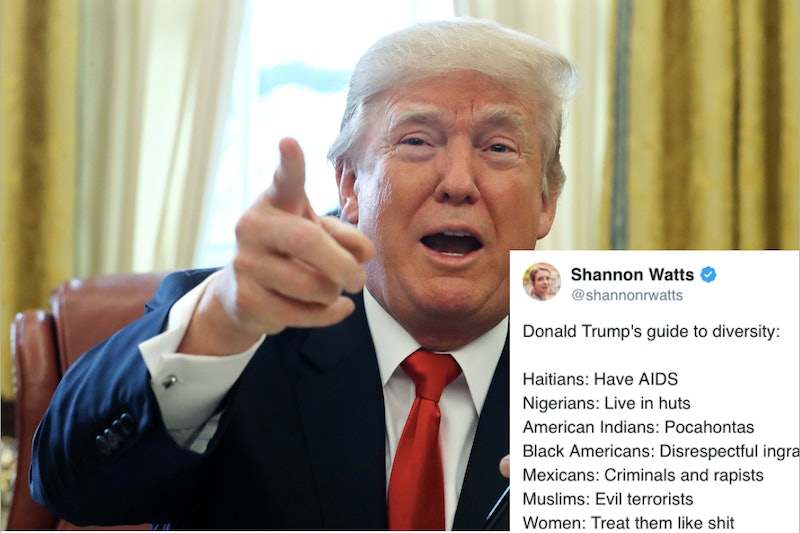 In light of Saturday's New York Times report on President Trump reportedly saying Haitians "all have AIDS" (the White House denies this), one tweet on how Trump talks about minorities and women shows a troublesome trend. The founder of the anti-gun violence movement Moms Demand, Shannon Watts, tweeted on Saturday a list of Trump's derogatory comments in the past about people of color and women, and contrasted that with what he's said about white supremacists.

She ended with one of the president's most controversial statements in the past year, in which he referred to white supremacists as "very fine people."

Watts tweeted her thoughts shortly after the New York Times' report on Saturday about Trump's view of foreigners in the U.S. During a meeting in June, Trump reportedly said Haitian immigrants "all have AIDS" and that Nigerians live in "huts." The White House denied the report; press secretary Sarah Huckabee Sanders called them "outrageous claims" and said "it's both sad and telling the New York Times would print the lies of their anonymous 'sources' anyway."

According to the Times' report, the two sources who asked to remain unnamed said that the president vented about immigrants during that June meeting. In addition to disparaging comments about Haitians and Nigerians, Trump also reportedly referred to Afghanistan as a terrorist haven.

The White House broadly denies the accusation of Trump making derogatory statements about minorities, but Trump has repeatedly gone on record saying controversial and demeaning things about minority groups. During his presidential campaign in 2016, Trump said about Mexicans: "When Mexico sends it people, they're not sending their best. They're not sending you. They're sending people that have lots of problems. And they're bringing their problems with us. They're bringing drugs. They're bringing crime. They're rapists. And some, I assume, are good people."

Watts referred to those remarks in her tweet, and pointed out Trump's offensive "Pocahontas" nickname for Massachusetts Sen. Elizabeth Warren. She also mentioned his comment from October on NFL players protesting police brutality. At the time, Trump called protesting players "disrespectful" and demanded they be suspended.

Watts also referred to Trump reacting differently to terror attacks by Muslims as opposed to non-Muslims, something that was brought up by observers in the wake of the devastating Las Vegas shooting in October. And her tweet pointed out that comment from Trump where he reportedly said "You have to treat women like sh*t." (Trump has denied saying anything like that.)

According to Watts' tweet, one particular group of people appears to have faced little criticism from the president. Referring to Trump's statement in the wake of the fatal white supremacist march from August, Watts reminded Twitter users that Trump called neo-Nazis "very fine people" in a speech that sparked intense backlash. At the time, Trump defended himself, saying, "I’ve condemned neo-Nazis. I’ve condemned many different groups. But not all of those people were Neo-Nazis, believe me."

Watts' tweet isn't just another criticism of Trump and his presidency; the underlying message behind her viral tweet is that that these comments from Trump aren't just flippant remarks. They're not only controversial comments from the president that should be swept aside. These quotes reveal a great deal about Trump's worldview and how he sees different cultures and groups.

Many have pointed out that these remarks are much more significant now that he's president. Trump has the power to shape policy now, and comments like these, both reported and confirmed, could signal the kind of thinking that goes into policies that affect minority groups in the country.