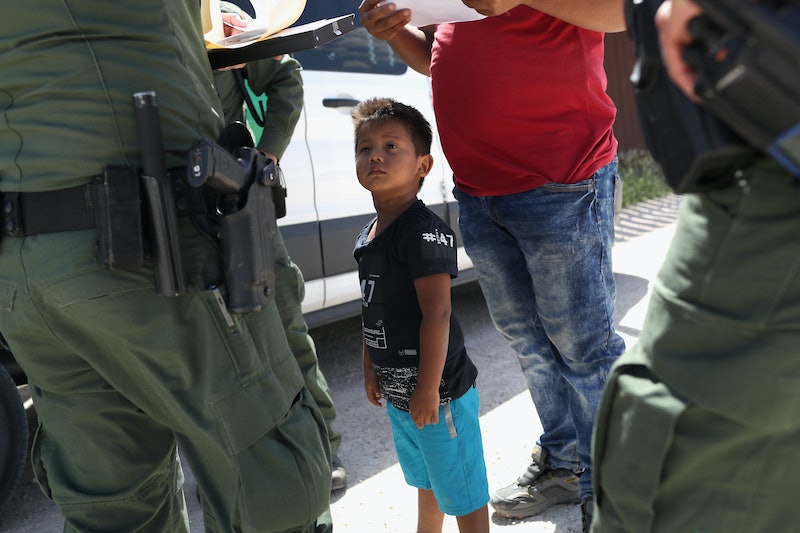 President Trump has insisted for weeks that only Congress could act to stop the practice of removing immigrant children from their families at the U.S. border. But he issued an executive order to address the subject Thursday that doesn't actually require that his administration ends the practice. In fact, experts say immigrant families' issues are far from over — and they predict Trump's order on family separations could allow that practice to continue in some form down the line.

"The language is pretty vague," Rosanna Berardi, an immigration law attorney in Buffalo, New York, tells Bustle. "So while I think the intent behind it is to keep families together, there's not a lot of detail about how that will happen."

Trump issued the executive order after lawmakers in both parties criticized the administration's policy as "inhumane." More than 2,300 children have been separated from their parents in recent weeks as a result of the Trump administration's "zero tolerance" policy. The policy mandates that people who enter the United States at an unauthorized point be charged as criminals and held in federal detention centers. Since children are not allowed to be held in those facilities, the government has been separating them from their parents and keeping them in makeshift holding areas, including a former Walmart.

The executive order calls on the government to detain families with a "legal parent-child relationship" together "where appropriate and consistent with law and available resources:"

It is also the policy of this Administration to maintain family unity, including by detaining alien families together where appropriate and consistent with law and available resources.

"[It says] 'available resources,' meaning that they have a detention center that can house the family or the facilities... and if not, and there's no funding for it, then the only viable solution of course under the law to them is to order a deportation," Linda G. Vega, an immigration attorney in Houston, Texas, tells Bustle. Vega notes that Congress could make funding available to house more individuals.

The executive order does not call for an end to the "zero tolerance" policy, either. People who immigrate to the United States illegally will still be charged as criminals.

"I don't think this has been carefully thought out," Berardi says. "I think the public outcry has been the driving factor behind the executive order today."

Perhaps because of the rushed nature of the order and its vague language, experts are anticipating legal challenges. The government isn't allowed to detain children for more than 20 days, even if they are held with their parents, thanks to a 1997 consent decree known as the Flores settlement.

"The executive order is saying, 'Well, too bad, we're not going to acknowledge that,' and that's something that could be ripe for litigation," Berardi says, referring to the Flores settlement.

For that reason, President Trump is urging Attorney General Jeff Sessions to ask the courts to change course and declare it legal for the government to hold children for more than 20 days.

"It shouldn't go on for an extended period of time," Vega tells Bustle. "I don't think withholding them in detention for months at a time like we've been seeing is a good solution to the problem."

Furthermore, Trump's executive order doesn't spell out what happens to the families that have already been separated by the U.S. government, or how the thousands of children in detention will be reunited with their parents. It does makes clear that the government will continue to separate families if the child's safety is at risk, however — a rule that was also upheld during the Obama administration.

While experts say the executive order still could leave families vulnerable to the possibility of being separated, it is expected to at least temporarily slow the crisis that has been unfolding along the nation's southern border.

"I am sure this is not the end of this story," Berardi tells Bustle. "I think we're going to see a lot more."