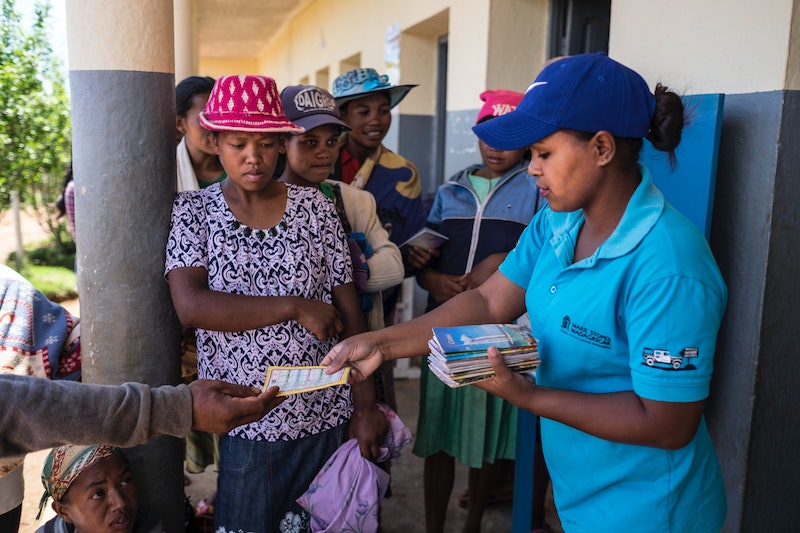 On his first day in office, President Trump did what every Republican president since Ronald Reagan has done: He reinstated a rule that prevents U.S. foreign aid from going to organizations overseas that so much as mention the word "abortion" to patients. An organization that provides reproductive health services around the world, Marie Stopes International, refused to sign the "global gag rule," as the policy is known. More than two years later, some of its branches are struggling to secure funding, and those who work at Marie Stopes say the rule has lit a fire under "anti-choice movements" around the continent.

In interviews with Bustle, directors for several Marie Stopes branches describe a "chilling effect" that they believe is an especially insidious effect of the global gag rule. They say it has generated stigma against the reproductive health services they provide, as well as emboldened groups that oppose women's reproductive rights overseas.

"There is this soft power element of the gag rule," Anne Coolen, director of Marie Stopes Ghana, says. "USAID is still the largest organization [that funds] family planning globally. And they do set the tone around the conversations around contraception, abortion, and women’s health."

Carole Sekimpi, director of Marie Stopes Uganda, echoes Coolen's point about how U.S. policy influences other countries. Though the Uganda branch lost $20 million in USAID funding because of the rule, Sekimpi says the chilling effect on the organization's work has been more damaging.

"The U.S. government being as big as they are, they set the tone for the world," Sekimpi says. "We find more people speaking critically of sexual reproductive health [now.] The anti-choice movement is also really well funded. ... They come up with all sorts of stories and all sorts of allegations against our work."

According to Sekimpi, there's a burgeoning campaign in Uganda that claims Africa is being "recolonized" through family planning, and that Marie Stopes Uganda specifically "coerces women to take family planning methods." She points to a 2018 film titled "Strings Attached," which alleges that the west is "ideologically colonizing" the continent by promoting and investing in reproductive care there. Obianuju Ekeocha, a U.K.-based abortion opponent, was the film's executive producer.

In communities where people are already suspicious of family planning services, the Marie Stopes country directors say that the global gag rule further reinforces negative attitudes in a way that hampers the organization's ability to do its work.

Since Marie Stopes Madagascar's last contract with USAID ended in 2017, Lalaina Razafinirinasoa, country director there, says it's been "very difficult" for her team to close a $3.5 million funding gap. Without that funding, she says it's been hard to combat "rumors" people spread about Marie Stopes' services and methods with information about the positive impact that access to reproductive health care has on the communities the organization serves.

Sekimpi has experienced a similar challenge. Since the global gag rule was reinstated, the organization has struggled to maintain a steady presence in parts of the country where people are more resistant to family planning services. That presence is crucial to building trust and engagement to "move them along the spectrum" of acceptance, according to Sekimpi.

She points to Uganda's remote Karamoja region, where she notes people haven't readily embraced family planning and teenage pregnancy is high. Previously, Sekimpi says Marie Stopes Uganda had an entire team located in the region to work with the community.

"Now we cannot afford it because we need to be more efficient [with money]," she says. Outreach teams now only go in to work with communities in Karamoji occasionally, where Sekimpi says someone really needs to be there every day to invest the necessary time and effort in them.

In January, Marie Stopes International said it still had a $50 million funding gap to close. That amount translates to an estimated 1.8 million unintended pregnancies, 600,000 unsafe abortions, and 4,600 preventable maternal deaths, according to the organization.

The experiences in filling that funding gap has varied from branch to branch. Sekimpi says Marie Stopes Uganda was able diversify its donor pool after losing USAID funding and continues its work at roughly the same scale. Coolen says funding for Marie Stopes Ghana wasn't directly impacted by the global gag rule, but she still worries that groups advocating against contraceptives and safe abortion could gain a foothold in that country.

"The chilling effect just makes everything difficult," Sekimpi says. When groups that oppose abortion and family planning services see that the U.S. government is "seemingly working against women's rights," she adds, it gives those groups license to do the same.

On the flip side, Sekimpi points out that working in such a challenging environment has made it clear just who shares the organization's mission.

"We want to use the opportunity now to identify our true allies and build networks that can withstand whoever is in the White House so that services for women continue, irrespective," she says. "The chilling effect is building an army of really resilient people."

More like this
How 5 People Upended Their Lives To Fight For Abortion Rights
By Hannah Smothers
34 Quotes That'll Inspire You On Juneteenth & Beyond
By Syeda Khaula Saad and Siena Gagliano
The Most Powerful Photos From The Weekend’s Abortion Rights Protests
By Melanie Mignucci
How To Fight For Reproductive Rights, Based On How Much Time You Have
By Courtney Young
Get Even More From Bustle — Sign Up For The Newsletter