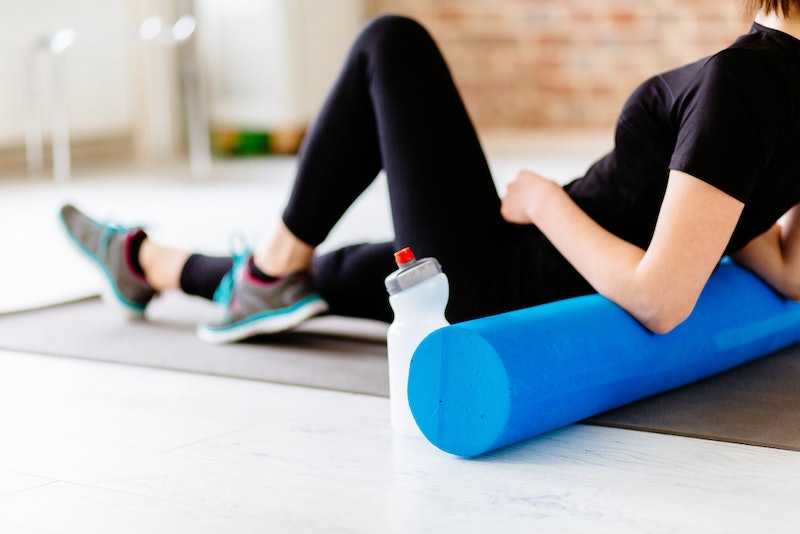 If, like me, you’re toying with the notion of adding foam rolling to your workout routine this year, you might be wondering what it feels like. And, even more to the point: How uncomfortable should you actually be when you’re foam rolling, and how do you know if you’re doing it wrong? Given that your muscles might be sore to begin with — whether from yesterday’s workout, sitting at your desk all day, or just … occupying a human body in the first place, some level of discomfort is to be expected when you foam roll, according to SELF.

“As with all types of exercise, you should always err on the side of caution when doing something new for the first time, including foam rolling,” Jeffrey Yellin, DPT, CSCS, Clinical Director and Physical Therapist at Professional Physical Therapy in Melville, NY tells Bustle via email. “The first time someone uses a foam roller, they should make sure they are using it the correct way. They should also start with a low density foam roller, as there are many different types of foam rollers on the market. Some are much more dense and firm than others, and those will be much less tolerable when used initially.”

The benefits of foam rolling run along a spectrum, SELF writes. Whether you want to warm up your muscles pre-workout sesh, cool down after, or recover faster from your HIIT class, a small but growing body of research might affirm why foam rollers are so popular these days. And while researchers don’t know exactly why and how foam rolling works so well, current theories suggest that, essentially, foam rolling is an effective way to perform myofascial release, SELF says. According to Shape, foam rolling helps target the body’s fascia system, which is the connective tissue that surrounds your muscles, bones, and joints. Foam rolling correctly can help relieve tense muscles, improve blood and nutrient flow throughout the body, and boost your flexibility.

And while all that sounds very fine, I’m still left wondering how much this foam rolling business is going to hurt. Is it a sort of it hurts-so-good kind of thing? “Although the initial rolling will not feel comfortable, you should not experience sharp, unbearable pains, and after a little bit of rolling, the discomfort should lessen and feel less sensitive,” Yellin says. “The muscles should also feel looser overall once you stop rolling and move around, however, there may be some lingering soreness.”

“There will be discomfort, but on a pain scale of zero to 10, six and below is acceptable,” personal trainer Shane Savoy of New York Health & Racquet Club tells Bustle via email. “Sometimes the point of foam rolling is to relax, and that can't be done if the user is in pain. Another thing to note is that frequent long term use can decrease pain threshold and increase pain tolerance; meaning less sensitivity to pressure and longer time under pressure respectively. This is why people go from soft to hard rollers over time.”

Yellin explains that once you get used to foam rolling, you can progress “to more dense foam rollers, using foam rollers with density zones or grooves or protrusions, and increasing the amount of weight bearing through the muscle while rolling, by doing one side at a time and/or lifting the opposite extremity to increase the amount of downward force being utilized.” If you’re overdoing it, or using a roller that’s too dense for you, you might need to back off. While you can expect some soreness during and after, foam rolling should not be straight up painful, Savoy says.

Yellin also advises that if you want to get through your foam rolling session with “minimal discomfort,” without sharp pain or bruising, knowing how to foam roll correctly is key.

“Focus the foam rolling over areas of soft tissue, such as the outside of the thigh into the iliotibial band or the front of the thigh into the quads, to help increase blood flow and circulation, and improve myofascial mobility. Avoid foam rolling over areas where there are sharp, bony prominences, such as over the kneecap or the outside of the hip, as the amount of soft tissue in those spots is not suitable to handle that much direct pressure and can cause injury and pain. In a typical foam rolling session, you can start with grossly one to two minutes of rolling over each muscle, focusing increased time over the areas of muscle that tend to be more sensitive, as tighter, stiffer muscles tend to have an increased sensitivity by nature,” he says.

Savoy notes that rolling for “roughly 30 to 45 seconds over area seem to be effective at softening tissue. But there foam rolling programs that spend up to 3 minutes on an area in order to achieve full relaxation.”

So, while foam rolling might leave you feeling sore-in-a-good-way, note that *pain* is an indication that either your roller is too hard for you, or you need to revisit your technique to make sure you’re foam rolling safely. With the right roller and a bit of know-how, foam rolling can be a great way to relax your muscles after a tough workout. Just make sure to cover your bases before you start, in order to avoid pain, bruising, and possible injury.