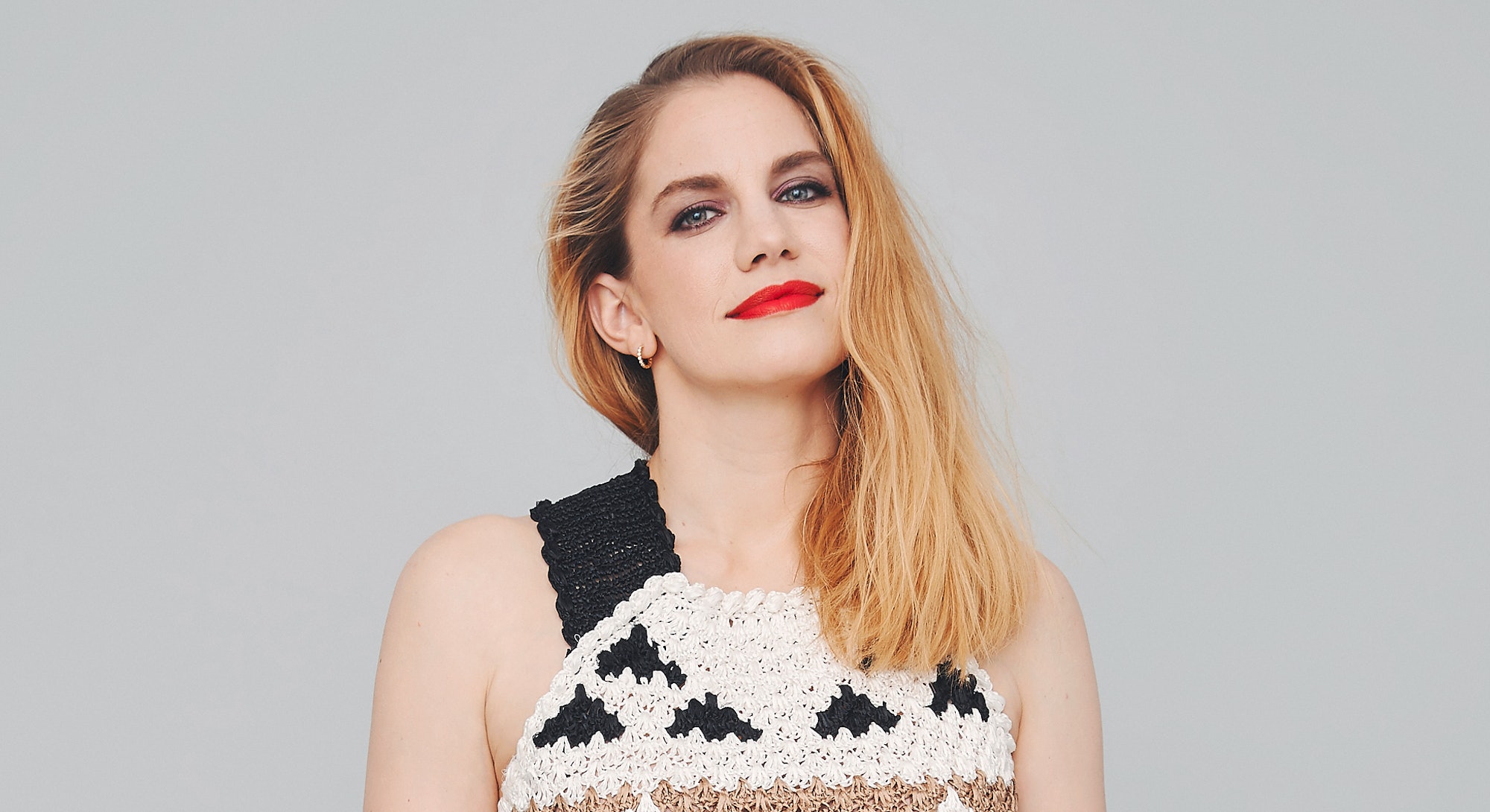 Everybody poops, and Anna Chlumsky has no problem talking about it. She's in the middle of making a crucial calculus about if she'll have time to grab some spicy take-out from her favorite Chinese restaurant before picking her kid up at school when she lets out a booming laugh, acknowledging "the whole bowel situation" that can be the result of too many cumin lamb noodles.

"You can't do it every day. There's a recovery period," she says, her voice projecting at a decibel level far higher than most people would dare to go while discussing some of the messier aspects of being human. But Chlumsky doesn't seem to mind. Everybody poops! Even actors. Even politicians.

It's an ethos, however silly seeming, that's so in line with Chlumsky's show Veep that its second episode ever suggested the hilarity of exactly that. It gave viewers the disgustingly specific image of Julia Louis-Dreyfus' hapless then-Vice President Selina Meyer doubled over in pain on the steps of a frozen yogurt shop, desperately trying to prevent the release of an ill-timed bout of diarrhea. Clearly, not even the woman second in line to the presidency is immune to a particularly nasty stomach flu.

That is, in a nutshell, the secret to Veep’s appeal. Through six seasons, the show has remained as sharp as it is vulgar; it's a political comedy of errors that entertainingly demythologizes the happenings in the hallowed halls of the White House and on Capitol Hill. Instead of lamenting the moral corruption of politics with a grand cinematic gesture like having a politician shove a reporter into an oncoming train, Veep shows how many power-hungry narcissists in politics are, at their core, a different, more garden-variety kind of evil: ruthlessly self-interested office drones. By Season 6, Veep hadn't killed its main journalist enemy the way the political saga House of Cards did back in Season 1. Instead, former President Selina Meyer had offered him a job as the speechwriter for her comeback presidential campaign, and he accepted the gig working for the very politician he'd always loathed, seemingly without scruples.

Looking back at Veep's legacy ahead of its seventh and final season, which premieres March 31, it's that acerbic mix of political machinations and realistic office life mundanity that drew Chlumsky, who plays now ex-president Meyer's overworked chief of staff Amy Brookheimer, to the show. And she's not afraid to mention pooping in conversation again to make her point about how Veep finds comedy in "debunking the mythos of politics."

"[Politicians] have to take poops and they have to figure out coffee makers — and they also have far too much power," she says, punctuating her sentence with nervous, slightly maniacal laughter. Though Chlumsky says she strictly refrained from discussing politics during the years her then-boyfriend, now-husband was deployed in Afghanistan, she speaks more animatedly as she circles the topic. "This whole gods and monsters thing," she says, "it's just comic-book stuff. Which, I love comic books, but let's place it where it belongs."

As a former child actor whose first big role was starring opposite Macaulay Culkin in My Girl at the age of 10, the now 38-year-old Chlumsky knows that's the truth: The people you see on TV, whether they're politicians on C-SPAN or actors on HBO, are just people. While being drawn into Hollywood's orbit at a young age can give an actor a distorted sense of self, for Chlumsky, starring in a movie before even hitting puberty seems to have had the opposite effect on her. She talks about her career as a child actor with the kind of perspective you wouldn't necessarily expect from someone who was doing international TV interviews on a movie press tour by the time she turned 11.

"When you're a kid, other people are making decisions for you, and you're just doing it for adults' approval. ... It's your parents' egos," the actor explains. After a few more movies — including a My Girl sequel — Chlumsky stepped away from acting and attended the University of Chicago to study international relations. It's there that she met her future husband Shaun So, with whom she now has two daughters. After graduation, she took office jobs, working as a fact-checker for Zagat and an editorial assistant at a science-fiction fantasy imprint of HarperCollins. She told herself she'd quit acting and stopped paying her SAG dues — until seeing an absurdist play about bestiality changed everything.

"I was like, 'I have to do that,'" Chlumsky says of deciding to re-enter the acting world after watching Mercedes Ruehl in Edward Albee's The Goat. She's dead serious, even as she acknowledges that this isn't the most conventional answer. "She just made this absurd topic make complete sense, and actually touch me in her story in such a real way." Not that having a moment of clarity made her decision to return to the profession she thought she'd left behind any easier. "I was so embarrassed to say [I wanted to return to acting] because I thought I'd quit," Chlumsky admits with a sigh. "It was a big struggle, as 24-year-olds go through."

A proud theater kid at heart, Chlumsky describes the stage as her first love and the purest embodiment of her passion. It's apparent in the way she can't help but project perfectly clearly when she speaks that she's spent her life learning to effortlessly ensure her voice is heard, even from the cheap seats. She quotes famed stage director Alfred Lunt and references Aristotle's Poetics and "the egoless gift of text" with the casual and uncalculated air of someone whose theatrical and liberal arts education is woven into her being, rather a strategic pretension.

"I wake up every morning wanting to be on stage," Chlumsky says, her eyes widening. "I crave it." She never expected that 18 years after her first movie, she'd return to acting and spend seven years as a regular on a comedy on television, sharing scenes with one of the most skilled comedic actors alive today. Not that making the transition from serious dramatic work to Veep was too difficult. Though Chlumsky isn't trained in improv, she says the humor of Veep is in playing chaotic and ridiculous situations completely seriously. Amy definitely doesn't know she's in a comedy, after all.

I just want to be documented as being on the proper side of things by the end of it all.

"She's totally Cassandra, going, 'There are Greeks in the horse!' [and] freaking out," the actor says, referencing the cursed prophet of Greek mythology. So Chlumsky treats the outrageous political fires Amy must put out and her consequent obscenity-laced reactions with as much gravity as her character does. "You're like in a soap opera — your whole world is crumbling most of the time, and it's up to the text to make it funny," the actor says. "Commitment to a truthful moment is always gonna be funnier."

But starring in a political comedy means those truthful moments can sometimes veer uncomfortably close to mirroring real-life events. Though Veep has taken pains throughout its run to never mention the political parties that Selina and the rest of her colleagues belong to, real-world parallels to current politics are inevitable, intentional or not. And it can be exhausting as an actor on a show steeped in government satire to have the fact that you play a president's chief of staff mean people feel compelled to ask you questions about your personal opinions of the political landscape. For many seasons, Chlumsky says she sidestepped addressing politics unless someone explicitly demanded answers. But she changed her stance when "our country got f*cked in 2016." She no longer feels she has the luxury of staying out of the discussion, and now believes it's her duty to use her platform to speak up when people are wronged. "I just want to be documented as being on the proper side of things by the end of it all," Chlumsky sighs. "You know what I mean?"

Even just bringing up her frustration with being asked about politics gets Chlumsky going, and she launches into a discussion of everything from her anger with Sen. Mitch McConnell's decisions ("some people are awful at their jobs") to her frustration with the fact that her father watches Fox News ("He doesn't watch sports, but he watches politics as if it's sports. I wish he'd watch a f*ckin' tennis match for God's sake!")

"But anyway," Chlumsky says, realizing she's just taken a detour to deliver an impassioned monologue about politics, "I obviously haven’t had enough to eat and I've had too much caffeine." She's channeling that Amy Brookheimer energy, running on the fumes of the morning's coffee and pure conviction. It's clear that it wasn't hard for her to get to that place for the role, and it certainly helps that unlike many actors who worked side jobs in the service industry to make ends meet, she spent her formative post-college years chugging coffee in a cubicle, experiencing firsthand what it's like to be a part of that strange stew of people that is office culture.

Of course, you can still have co-workers and camaraderie without a physical office, and as Veep enters its final season, Chlumsky says it's the metaphorical "water cooler moments" she's spent bonding with her cast mates that she'll miss the most. "I mean, well, the job was nice!" she adds with a laugh. President Selina Meyer may not be a shining example of a good boss, but watching Amy clench her teeth, widen her eyes, and furrow her brow in a look that's equal parts stress, amusement, and horror will ignite a familiar feeling in anyone who's ever worked under a manager who's a total nightmare. Lucky for Anna Chlumsky, she's only pretending to be second in command to a deranged narcissist — and as far as jobs go, it's been an absolute joy.