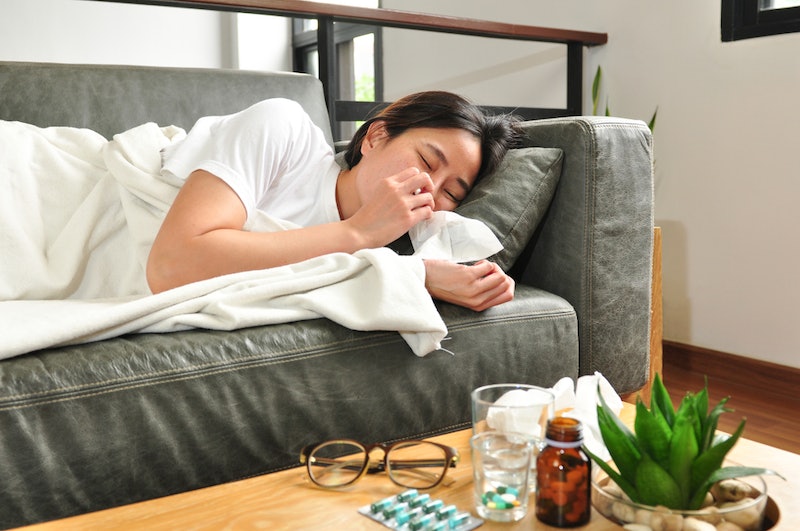 In flu season, prevention can be better than cure: we'd all rather avoid getting colds and influenza altogether than suffer through acres of tissues. The best way to prevent the flu is to get the flu shot, which is updated yearly, but science has shown that vitamin C may also have a preventative effect against flu. Experts want you to know, though, that its effect on flu prevention is complicated.

“Vitamin C, or ascorbic acid, is a water-soluble vitamin, which is needed by the body to form collagen in bones, cartilage, muscle, and blood vessels, and aids in the absorption of iron," Dr. Sherry Ross, M.D., an OB/GYN and women's health expert at Providence Saint John's Health Center and author of She-ology, tells Bustle. We don't produce vitamin C ourselves, so we have to absorb it from our food. Vitamin C also protects cells against damage from free radicals, including air pollution and cigarette smoke. Its power against influenza, though, comes from its contribution to the immune system.

"Vitamin C helps the immune system work well in order to protect the body from diseases," Dr. Ross tells Bustle. A study in Nutrients in 2017 found that vitamin C is essential to many aspects of our immune system, including killing off microbes and producing B- and T-cells, which are both key parts of our immune response. People with vitamin C deficiency, the study noted, tend to have impaired immunity and are more susceptible to infection, and supplementing with vitamin C can help prevent respiratory infections — like the flu. The more effective our immune systems are, the better they're able to fight off the flu virus.

A separate review of studies on vitamin C and the immune system published in Nutrients in 2017 noted that vitamin C helps prevent a range of infections, like pneumonia and tetanus. However, the flu is a virus rather than a bacterial infection — and scientists are still trying to figure out exactly how vitamin C helps the immune system fight viruses in particular. A study in mice in 2017 provided a clue: It showed that if the mice had high levels of vitamin C when they were exposed to the flu, their bodies produced higher levels of interferons — proteins created by the immune system to fight viruses. These boosted interferon levels made it harder for the flu virus to replicate, and stopped it in its tracks before it could take over the body.

It's important to note that when mice in the study already had serious flu symptoms, vitamin C didn't help. While science shows that the duration of the common cold might be shorter if you take vitamin C while you're recovering, the flu is a different kind of respiratory virus, and the same rules don't apply. A 1999 study on humans showed some relief of flu symptoms when patients were given vitamin C, but current science indicates that vitamin C is most helpful for influenza prevention, not as a cure.

If you'd like to help prevent the flu, it's a good idea to make sure you have enough vitamin C every day — including outside of the flu season. Going into colder months with a vitamin C deficiency may impair your immune function. "The recommended daily allowance of vitamin C you need each day depends on your age, gender and reproductive status," Dr. Ross tells Bustle. "For nonsmoking women and men, it's 60mg."

She recommends getting your five-a-day of fruits and vegetables, including citrus fruits — but if oranges aren't your jam, she says, tomatoes, potatoes, kiwifruit, broccoli, strawberries and cantaloupe are all good sources of vitamin C. Break out the fruit salad, get the vaccine, and help your body fight off flu.