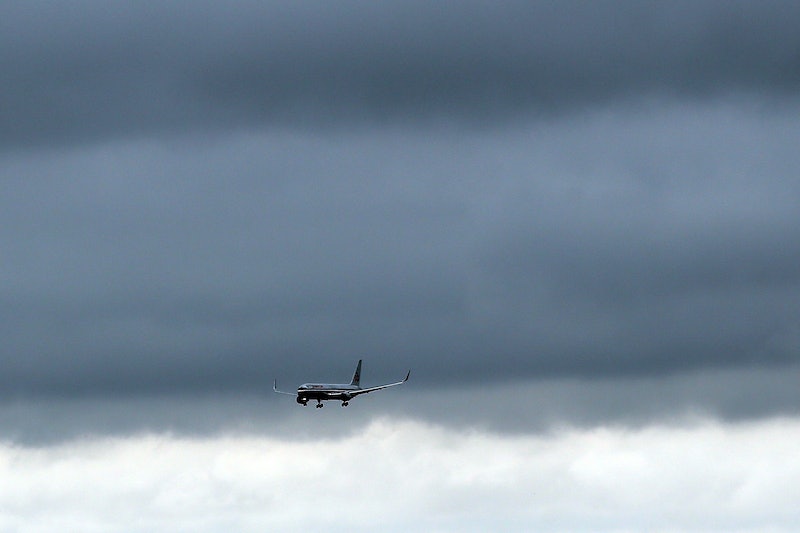 This may come as bad news for travelers on the Northeast — airlines have canceled more than 725 flights for Monday, due to 2017's big blizzard, according to USA Today. For Tuesday, another 815 flights have been canceled, and even more cancellations are anticipated ahead of Winter Storm Stella, expected to hit the Northeast on Tuesday. Weather forecasts indicate heavy snow headed its way to impact travel in New York, Philadelphia, Baltimore, Chicago, and Boston, among other cities.

Airlines have waived change fees to customers who were scheduled to fly. The preemptive halting of these flights along with weather waivers arrive in advance of a monster blizzard expected to hit its highest point in the northeast on Tuesday. Weather forecasts expect snowfall standing as tall as 12 to 18 inches.

The forecasted snow storm comes amid reports of snow falling in the Midwest and a heat wave in the west of the U.S. Potentially record-setting high temperatures are expected to soar in the Southwestern states of Arizona, New Mexico, Colorado, and Utah. Temperatures might go as high as the 90s, according to Reuters.

Meanwhile, the first round of the winter storm that arrived Friday led to the cancellations of 103 U.S. flights along with delays for 1,756, according to The Voyage Report.

The snowstorm is also expected to cause tree damage along with power outages in the Northeast, according to The Weather Channel. The storm may undergo "bombogenesis," a term used to describe intense low-pressure systems that gain momentum rapidly. This means that the snowstorm is classified as a weather bomb which undergoes cyclogenesis, a process involving a rapid drop in pressure that takes place within 24 hours.

The last time this happened was in February 2016 when Winter Storm Mars took shape of a bombogenesis. Prior to that into 2015, Winter Storm Iola underwent bombogenesis and caused coastal flooding in certain areas of Massachusetts.

For those of us more curious about the workings of a snow storm named after the Latin word for "star," The Weather Channel shared an interactive guide that lets you view and track the current status of the storm. With a radar and updated weather maps, you can geolocate this late-season behemoth.

Snow in March is relatively rare and not one of the best ways to start spring but the Northeast region is no stranger to late snowfalls that halt road and air traffic, cancel events, and — of course — lock people in their buildings with piles and piles of snow in front of doors. But at least now you know you'll know to bundle up and prepare for possible flight delays if you're traveling.

More like this
All The Most Stylish Winter Wardrobe Staples You Can Buy On Walmart.com
By Jessie Quinn
Here's How The December 2022 Full Moon Will Affect Your Zodiac Sign
By Nina Kahn
December's Full Moon Is Bringing Extra Drama For These 3 Zodiac Signs
By Nina Kahn
The 12 Trendiest Nail Polish Colors To Wear In 2023
By Olivia Rose Ferreiro
Get Even More From Bustle — Sign Up For The Newsletter