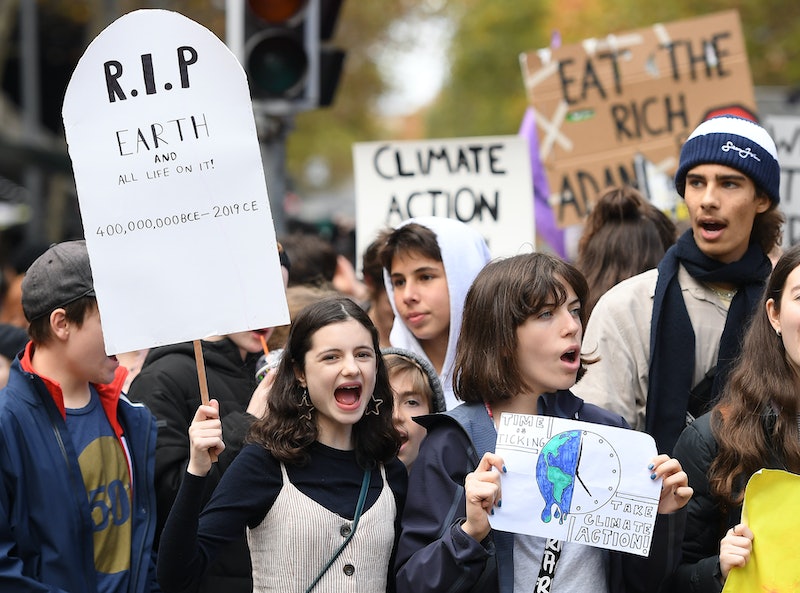 In the last several years, there have been no shortage of warnings and predictions about global warming from scientists across the globe. But for those wondering how climate change will affect the future, a new report has some grim details. The paper isn't a scientific study, but an effort to model a future scenario based off of the existing research available — and that future scenario is worse than unpleasant. It's unlivable.

The policy paper, titled "Existential Climate-Related Security Risk: A Scenario Approach," was written by David Spratt and Ian Dunlop, climate researchers for the Breakthrough National Center for Climate Restoration in Australia. Per CNN, the researchers based their future scenario off of existing research, calculating what would happen if the planet's temperature rose 3 degrees Celsius by then.

The predictions the researchers make for 2050 are unspeakably bleak. They say over a billion people on Earth will be displaced, ecosystems (like the coral reefs) will be virtually decimated, and 55% of the world's population will experience at least 20 days of lethal heat every year. They define lethal heat as a temperature "beyond the threshold of human survivability."

The researchers wrote, "To reduce such risks and to sustain human civilization, it is essential to build a zero-emissions industrial system very quickly. This requires the global mobilization of resources on an emergency basis, akin to a wartime level of response."

You can read the paper's predictions in full for free. But here's a brief summary of what the researchers describe the 2050 landscape to look like, under this predicted scenario:

Most regions in the world see a significant drop in food production and increasing numbers of extreme weather events, including heat waves, floods and storms. Food production is inadequate to feed the global population and food prices skyrocket, as a consequence of a one-fifth decline in crop yields, a decline in the nutrition content of food crops, a catastrophic decline in insect populations, desertification, monsoon failure and chronic water shortages, and conditions too hot for human habitation in significant food-growing regions... significant sectors of some of the world’s most populous cities — including Chennai, Mumbai, Jakarta, Guangzhou, Tianjin, Hong Kong, Ho Chi Minh City, Shanghai, Lagos, Bangkok and Manila — are abandoned. Some small islands become uninhabitable... Even for 2°C of warming, more than a billion people may need to be relocated and In high-end scenarios, the scale of destruction is beyond our capacity to model, with a high likelihood of human civilization coming to an end.

The bottom line behind these predictions is explained in the foreword by Chris Barrie, a retired admiral and former head of the Australian Defense Force: "A doomsday future is not inevitable. But without immediate drastic action our prospects are poor."

If you want to see more aggressive action taken to make sure that this prediction doesn't become a reality, you can contact your legislators and make sure they know how important zero-emission legislation is to you. You can also make sure to pay attention to what various presidential candidates are saying, regarding their own climate change plans, and to take that into consideration come voting time.