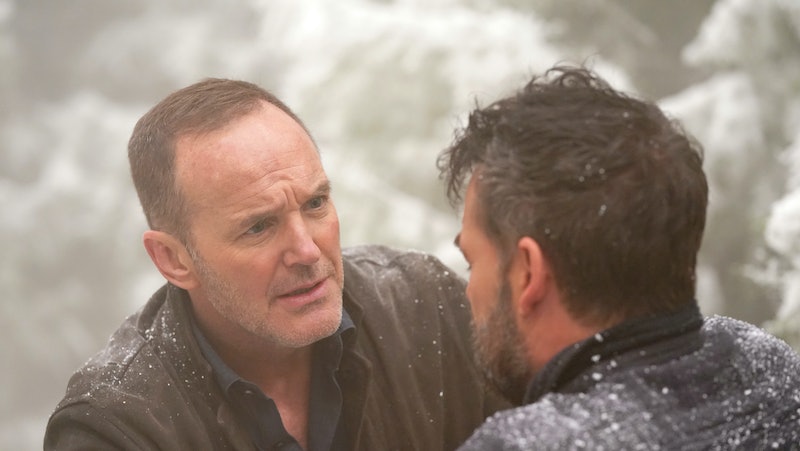 The Marvel Cinematic Universe is typically a joyful multi-platform extravaganza, but those who have caught the latest big screen outing may be a wee bit concerned for those small-screen heroes. To say their fates are up in the air is understating it a bit. How will Infinity War affect Marvel television shows? There are major, major, MAJOR spoilers for Avengers: Infinity War ahead.

Is everyone who hasn't seen Infinity War yet gone? OK, lean in. So, um, what in the name of Hela is going to freakin' happen? Do 50 percent of the casts of all those shows on ABC, Hulu, Freeform, and Netflix get the year off until Carol Danvers a.k.a. Captain Marvel comes and cleans up this mess? At the end of Infinity War, Thanos snapped his fingers and half of the GALAXY vanished. They turned into wood chips. They're gone. They got raptured by a purple people eater. It's The Leftovers out there. That goes for Earth and that goes for Space, where Tony Stark is stranded on a planet with Nebula.

This movie ending doesn't just affect ABC's Agents of S.H.I.E.L.D. either — whose primetime game was epically changed by the reveal in Captain America: Civil War that the agency was crawling with secret Hydra operatives. (Speaking of, how about that Red Skull cameo in Infinity War? Good to know that no matter what, at the end of the day, it's always about Hydra.) Anyway, as much as the Marvel Netflix shows like Daredevil, Jessica Jones, Luke Cage, and the other one like to be coquettish about their place in the MCU by vaguely referring to the big screen heroes and their various adventures, this particular movie is a little bit more difficult to ignore.

Here's a possible solution, and it has to do with time. Is Avengers: Infinity War is set in 2019? Nope. During the film, Tony Stark mentions that it has been six years since Loki, Thanos, and the Chitauri attacked New York City. Since The Avengers was released and seemingly took place in 2012, that makes it 2018. (Incidentally, that placement retcons a title card in Spider-Man: Homecoming that said it was taking place eight years after the Chitauri invasion.) So, no dice there.

The decimation of half of the galaxy is too massive of a game-changer to ignore, so it's probably going to play out somehow. How could so many people working on so many shows know the ending to Infinity War and stay mum? Not even Tom Holland can be trusted to keep the secrets.

So, until everything becomes a bit more clear, here's a brief rundown of the Marvel television seasons coming up (that are officially part of the MCU, no disrespect to Legion or The Gifted) before the Avengers 4 premiere. Let's try and figure out what the heck is going on.

The answer to this one could come as soon as Friday, May 4's episode, but probably not. The episode that coincided with Infinity War's release date did not address Thanos — which makes sense, as it would be a little early for Marvel to spoil Marvel. More importantly, the agents are dealing with their own potential Earth-shattering catastrophe. The upcoming episode descriptions for the last three episodes of Season 5 are "a newly determined Talbot takes Coulson to meet the enemy and attempts to stave off the destruction of Earth," "Daisy’s future as the destroyer of worlds could take a critical change," and "Coulson’s life or death is the challenge the team finds themselves in, as the wrong decision will cause the destruction of Earth."

Not a lot of room for genocidal Fosse moves, even though both Maria Hill and Nick Fury, who have appeared on S.H.I.E.L.D. in cameo reprisals, showed up in the Infinity War post-credits. The ABC series has yet to be renewed for Season 6, and if it is, it will most likely deal with this fallout. Until then, it stands to reason that the show is taking place before this all went down. Also on the ABC front, Inhumans has not been cancelled, officially.

Sidebar that only '90s kids will remember: Coulson is returning to the big screen in Captain Marvel — which takes place three decades ago — as his younger Agent self. Keep your 'shipping fingers crossed that Melinda May at least gets a mention. So a cinema/TV crossover is coming, even if it's retroactive.

Does Thanos' percussive homicide go for dinosaurs too? If you're itching for more Marvel content after Infinity War and haven't seen this Hulu series, drop everything. The super teens are adorable, powerful, stressed out, and totally screwed unless all of their parents happened to be the ones to vanish. Honestly, they have enough problems. The show was renewed for Season 2 and will likely return later in 2018, so we'll have to wait and see.

Another teen-centric superhero adventure, the Freeform series hasn't even premiered yet. When it begins on June 7, look out for references to Thanos' big move.

Too bad Thanos never entered a hallway with these four. He'd be toast. The Netflix Marvel shows also all take place in New York City. The street-level heroes definitely at least saw that donut ship. Plus, again, that whole disappearing act. 50 is a big percent, and after seeing what happened to the Avengers and the Guardians it's hard to believe that everyone on all of these shows will fall into the lucky half.

Luke Cage Season 2 will be the first to give fans any answers. It will be released on Netflix in June. Iron Fist Season 2 is filming now and expected to be released in 2018. Also coming, but without dates announced, are The Punisher Season 2 and Jessica Jones Season 3.

There's no way that all of these series will ignore the events of Infinity War. There's no way. Think about it. Use The Leftovers as an example, actually. In that story, 12 percent of the world's population vanished and it sparked a global existential crisis and like 10 different cults. That's a minuscule proportion compared to the 50 percent that Thanos dusted. Life would not just go on. Infinity War dropped a massive cliffhanger, and dug a deep well for writers to find new stories to tell.

Fans are already hard and work trying to figure out how the events of the last 10 minutes of the latest Marvel movie will be undone. Maybe there's some shady business going on with the timeline. Maybe the third act of that movie was taking place in Dr. Strange's head a la Twilight: Breaking Dawn — Part 2. Who can say until the team comes back together in 2019? All fans know is that everything is connected, and this time, that could mean a lot of broken hearts and missing teammates.