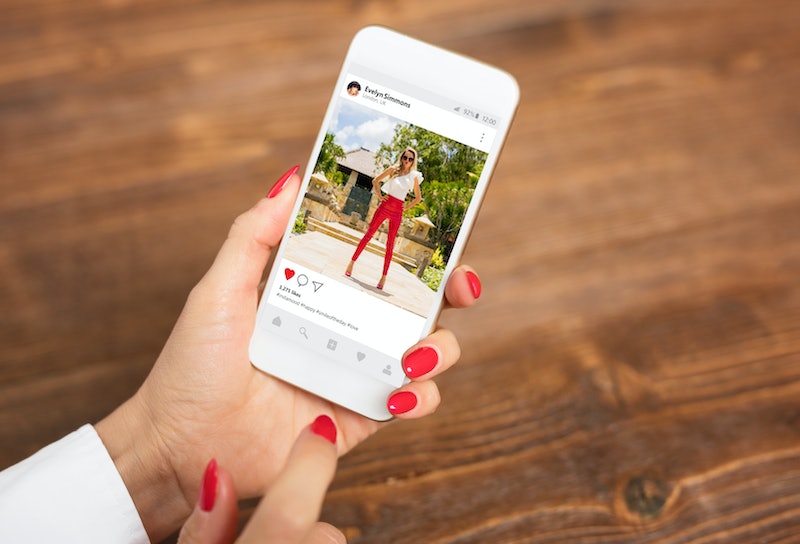 July 18 marked the day that Instagram started hiding likes. Not for everyone, but for a select few countries as part of an ongoing trial to see whether removing like counts would remove the pressure that surrounds social media. It has caused a lot of chatter among influencers and regular folk, but one thing that deserves attention is how Instagram's like trial could affect women.

As the BBC reports, Instagram is trialling the so-called "like ban" in Australia, New Zealand, Italy, Ireland, Japan, and Brazil. (A test was previously carried out in Canada.) Users will still be able to view how many people like their own posts, but others won't be able to see the number. Instead, the name of a liker followed by "and others" will appear under each post. It is still possible to see who has liked others' posts, but you'd have to manually add up names to calculate the total like number.

"We hope this test will remove the pressure of how many likes a post will receive, so you can focus on sharing the things you love," Mia Garlick, Facebook's Australia and New Zealand director of policy, said in a statement to the BBC. The reaction to the news was pretty negative. Many tweeted that "no one asked for this," begging Instagram to restore chronological posts instead.

But it could wind up being beneficial in the long run. Likes have become the arbiter of popularity and success; not just for influencers who rely on social media platforms for their income, but for most people who use Instagram.

"Most women want to look and feel their best. That’s a natural part of living in our society," says Professor Marcos Sforza, expert aesthetic surgeon and scientific director of MyBreast Cosmetic Surgery. "However, I really do believe that social media is propagating and accentuating these unrealistic expectations of the self. So much so, the number of likes a social post gets can have real-world health implications."

In 2017, Instagram was named as the most damaging social platform for young people. A Royal Society for Public Health survey of almost 1,500 young people, aged between 14 and 24, found that it worsened concerns over body image and caused feelings of depression, anxiety, and loneliness. A pressure to show off your best self at all times was also reported by 15 percent of teenagers in a University of Chicago survey. (Some positives were noted, including feeling more informed and connected to people.)

But girls and women could be bearing the brunt of the problem, if news headlines are anything to go by. Women are around twice as likely to develop depression than men; one in four young women in England have a mental illness, according to an NHS survey; and, as the Guardian reports, depression in girls has been linked to social media. It's still not possible to "definitely say that social media usage causes poor mental health, although the evidence is starting to point in that direction," Professor Sir Simon Wessely told the paper.

Body image issues are also a concern. Professor Sforza notes that, currently, over 30 percent of his clients "come with visual references of social media influencers to demonstrate the look they’d like; people who often have thousands, if not millions, of followers and likes." He describes this as "a clear red flag" and advises beauty industry professionals to refer any concerning patients to a psychologist or psychiatrist.

"In theory, you can see how using Instagram enables the connection that’s so beneficial to your wellbeing. It can maintain and strengthen friendships, provide ready-made communities for support, give a sense of belonging to your ‘tribe’, broaden knowledge and awareness of others, and be a way to show creativity and express yourself," says John-Paul Davies, counsellor, psychotherapist, and author of Finding A Balanced Connection.

But "theory" is the operative word here. "In practice, neurologically, you’re more likely to automatically prioritise two other concerns that feel nowhere near as good," Davies adds. "The first is worrying about your psychological safety and the second is being concerned about your ‘status’ within the group — how you appear to, and compare with, others."

Both are "more likely to be dominant" in young people, he says — especially women. And it goes without saying that neither lead to feelings of happiness. Viewing other people's likes and being aware that they can, in turn, see yours is "more likely to trigger the safety and status comparison parts that rarely feel good for any period of time," notes Davies. Removing this ability could be Instagram's way of "trying to help you avoid your inbuilt design obstacles to thinking and behaving in a way that makes you happy."

Women's mental health may see a boost, but will their careers? According to influencer marketing platform Klear, 77 percent of influencers are female. Assuming that their follower count is more important than anything else is incorrect. With bots and fake followers circling, it's an influencer's engagement rate that really counts. Essentially, this shows how much interaction their profile receives, whether through likes or comments.

If likes are hidden, brands could be less likely to invest in or collaborate with an influencer, detrimentally impacting their finances. But many in the industry believe that Instagram is heading in the right direction. "I think it will encourage creatives to produce work not  just because the internet thinks it's popular," Ally May Carey wrote, adding that it could lessen the pressure on individual Instagrammers.

In a statement sent to Bustle, Edward Fuller, CEO of influencer marketing agency Proseeders, said hidden like counts "won't have a dramatic impact on [influencer and business] operations as companies including Instagram, Facebook, Twitter, and YouTube have allowed brands, agencies, and individuals to create software which gives them all of the engagement metrics they need to make a decision as to whether they want to work with an influencer or partner with a business."

Any impact — positive or negative — won't be evident unless Instagram's like trial goes global. But, as Davies concludes, we may be missing a wider question. "That, with human beings designed as we are, [the company's] really fighting an uphill battle and that the best thing we could all be doing for our wellbeing is to take matters into our own hands and spend less time [on] places like Instagram."