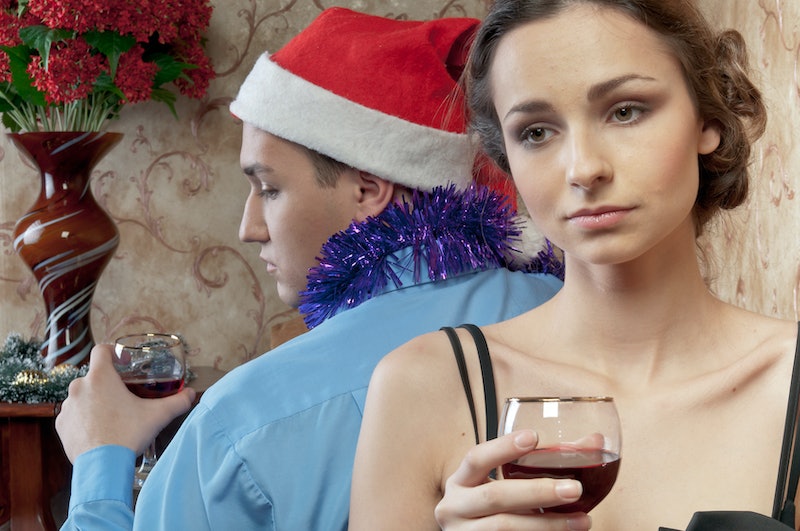 It's back. Mercury Retrograde is returning just in time for the 2017 winter holidays. The one saving grace is that Mercury will go direct two days before Christmas so you won't have to drag its backward energy into 2018. If you're wondering how Mercury Retrograde will affect your 2017 holidays, this particular Mercury Retrograde has both positive and negative aspects, and the ultimate outcome depends on how you navigate the next four weeks. "Mercury goes retrograde for the final time in 2017, from December 3-22 and will be guiding all of us to reflect on the year gone by," Intuitive Astrology reported.

This holiday 2017 Mercury Retrograde is a time to take inventory and to examine your past to see if there are any forgotten treasures to pluck, or any unresolved messes that needed to be cleaned up. While Mercury's quarterly backspin can still result in communication-related kerfuffles, you can also use this period as an opportunity to reflect on 2017 and focus on your intentions for 2018, which has to be better than the dumpster fire that was this year, right?

According to Intuitive Astrology, this Mercury Retrograde is an important time for introspection before moving into the new year. "It allows us to unearth buried truths or thought patterns that may be blocking us from moving forward or getting where we want to go." The good news is that most people are reflective at the end of the year anyways. However, if you have holiday travel planned, Astrology King wrote that Mercury Retrograde could interrupt your holiday travel plans in a big way, which could turn your calm reflection into inappropriate outbursts. In any case, it's good to be prepared.

While reflection is important during the upcoming Mercury Retrograde, Astrology King warned that it's important not to let negative thoughts take over your brain. "Such negative thinking can lead to depression and difficulties [in] communication. Harsh or critical words can cause relationships problems like coldness, isolation, or rejection," Astrology King noted on their website. "The key to dealing with this heaviness is positive thinking and keeping your mind busy. When dealing with others it is more important than ever to listen carefully and think twice before speaking."

Because the holidays can be an emotional minefield where communication is likely to awry during the best of times, it's more important than ever to monitor your thoughts, words, and actions during the December 2017 Mercury Retrograde so small misunderstandings don't devolve into epic communication meltdowns. Those who do not pay attention to this warning could end up experiencing a winter holiday in the tradition of National Lampoon's Christmas Vacation, Home Alone, or The Family Stone.

Additionally, Intuitive Astrology noted that because the December 2017 Mercury Retrograde begins around the Gemini full moon and ends near the winter solstice, there will be increased internal pressure to bring closure to unresolved issues in your life. "The theme for December’s retrograde is really about releasing and shedding all the mental blocks and thought patterns from 2017 so you can enter 2018 with a fresh perspective and a new outlook," Intuitive Astrology explained.

Doing personal inventory is hard work in general, but the good news is that because Mercury is going retrograde in Saturn, the past may offer some solutions to present-day problems. "Retrograde motion and Saturn are both associated with the past," Astrology King explained. "This means you can use your memories and experience[s] to solve problems and find practical applications for your ideas."

However, it might be tough to see the bright side if you're one of the people affected by technology or travel mishaps, which Astrology King predicted will be magnified during the December 2017 Mercury Retrograde. Let's face it, the holidays can be a nightmare for travel when Mercury is direct. With so many variables like the sheer number of people trying to get to where they're going to bad weather, it' might be a good idea to plan for the worst and hope for the best so you're not taken off guard. Make sure you have a back-up plan for your travels or family holiday celebrations. Then, have a back-up plan for your back-up plan.

"Mercury retrograde December 2017 [in] Saturn will also make other general Mercury retrograde problems worse, especially transport problems such as travel delays and restrictions," Astrology King warned. "Communication and technology breakdowns could range from losing your cell phone to massive internet hacks and interruptions in satellite transmissions." The bottom line here is to back up your cellphone, computer, and tablet ASAP.

Now, more good news. According to Dark Pixie Astrology, the most intense period of the December 2017 Mercury Retrograde is at the beginning, which means that things could calm down as the holidays approach. It might be best to stay home on Dec. 3 and not talk to anyone since Mercury Retrograde and the full moon both happen on this day.

"Full moons are highly charged emotional energy, and with this being in one of the signs Mercury rules, that just becomes even more complicated," Dark Pixie Astrology explained on their website. "With Gemini and Sagittarius and Mercury all being communication [rulers], I'm thinking some sort of bad news, bad decision-making, bad ideas, bad plans."

Additionally, Dark Pixie Astrology noted that Dec. 6 is also a day to watch out for because as Saturn gets ready to exit Sagittarius some people might be in for a karmic lesson. Basically, December 2017 Mercury Retrograde is a mixed bag at best. But, if you go into it aware of the possible pitfalls, it won't be terrible. If you've been shirking your meditation practice lately, this is a great time to pick it back up to ensure you have the patience to get through the retrograde and the holidays in one physical and emotional piece with all of your relationships intact.