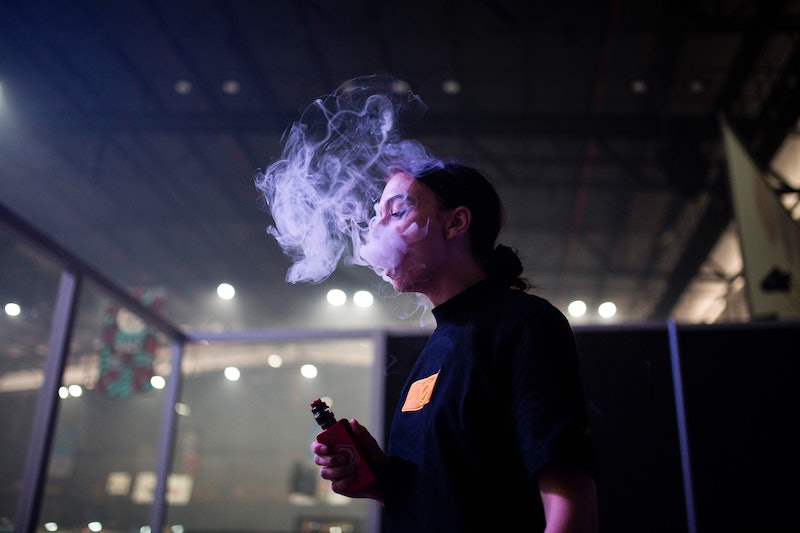 Amid a growing public health crisis, researchers are scrambling to find out how vape and e-cigarette use will affect people over time. So far this year, there have been over 1,600 cases of vaping-related illness or injury, and at least 34 deaths have been confirmed across the U.S., according to the Centers for Disease Control (CDC). Because vaping devices are so poorly regulated and little research has been done on their long-term effects, however, doctors don’t yet know exactly what substance is causing this outbreak in lung injury, though most of the cases have involved THC-containing devices. Worse, they don’t know what the long-term effects on users’ overall health will be.

But according to researchers, while the risk of sudden and painful lung injury is equal for people of any gender, data is emerging that show vaping may pose a greater risk for women’s reproductive health over time than is currently known. And the effects of vaping on fertility and pregnancy might be "damage that couldn't be undone," Dr. Melissa Suter, an assistant professor at Baylor College of Medicine, tells Bustle.

Vape use among young people has been rising, according to the latest data from the University of Michigan's Monitoring the Future survey, which took place before the recent outbreak in vaping-related illness. Gallup's data showed that one in five people under 30 vaped in 2018. The Truth Initiative, an organization aimed at getting young people off of both smoking and vaping, tells Bustle that male high schoolers reported vaping at a slightly increased rate than female high schoolers. While as of now, there’s no clear data on how vaping affects non-binary and gender non-conforming individuals specifically, Dr. Yasmeen Butt, a pathologist for the Mayo Clinic, says that when it comes to lung-related illnesses, all genders face equal risk.

I continued to get way worse ⁠— really, really fast.

"The lung is a an organ that's essentially the same in both genders," Butt tells Bustle. “In terms of what we actually saw under the microscope, there were no differences between male and female patients.” Butt co-authored a recent study looking at what vaping injury actually looks like in patients’ lungs. Though the study only looked at 17 patients, Butt says the most important takeaway is how quickly vaping can lead to permanent injury ⁠— and how little doctors know about exactly which chemicals are to blame.

"Say someone has a very heavy weekend of vaping," Butt says. "Maybe they could be in the ICU the next day.”

That’s exactly what happened to Piper Johnson, an 18-year-old from Illinois. Johnson was hospitalized after experiencing severe chest pain and difficulty breathing while on her way to move into her dorm. While doctors initially thought Johnson had pneumonia, they quickly learned they were dealing with something entirely different.

“They didn't know what was going on because a normal case of pneumonia would have gotten better with the antibiotics,” Johnson says, “But I continued to get way worse ⁠— really, really fast.”

Johnson says she was Colorado’s first confirmed case of vaping-related illness. When doctors suggested Johnson may have acute lung injury due to vaping, she says she felt ashamed and guilty. While Johnson's mom had been bugging her to quit, since she started vaping her sophomore year of high school, Johnson admits she wasn’t actually aware of the health risks of vaping. “I had no idea that like all that stuff I had been doing the past two years was like silently killing me,” she says. “It's a really, really sobering thought.”

Unlike smoking, which Dr. Butt says can cause lung disease and cancer after chronic use, vaping can cause lung injury relatively quickly. But researchers are finding that, for women, vaping could have unexpected, chronic impacts on organs other than the lungs. Dr. Kathleen Caron is a researcher at the University of North Carolina School of Medicine, and recently led a study testing how e-cigarette vapor affects fertility and pregnancy in animal models.

Caron tells Bustle that part of what inspired her team to begin studying the effects of vaping chemicals on reproductive health was how little research was done on the topic. “While there are many studies and 50 years worth of work that tell us that cigarette smoking is dangerous during pregnancy,” Caron says, “we were unable to find any rigorous research or data that tells us whether or not vaping is safe during pregnancy.”

Caron’s work focused on one specific chemical found in most vapes, propylene glycol vegetable glycerin, but didn’t test the effects of all of the chemicals found in vape cartridges. That’s because, Caron says, there is so little regulation when it comes to vapes and their suppliers that there’s a seemingly endless list of chemicals that go into these products, and any one of them could be harmful when inhaled. (Widespread fear following early reports of vaping's health effects led Juul, a popular e-cigarette brand, to stop advertising in the U.S. and accept a proposed ban on their flavored products. Vapes with THC, which are still illegal on the federal level, continue to be unregulated, despite the fact that they have been implicated in most cases of vape-related injury.) Caron's study found that even being exposed to just part of the chemical cocktail in vapes resulted in impaired fertility, delays in pregnancy, and even low fetal weight.

“A cinnamon-flavored bubblegum or Tic Tac or whatever might be perfectly fine to ingest,” Caron says, referring to the flavor chemicals added to many vape pods, “[but] it's an entirely different thing to combust it and inhale it. The chemical compositions change, and the effects of those chemicals on the lungs and the immune system, as well as other organs, is just not known.”

There's just no data out there on [vaping's] effect on their fertility.

Dr. Suter was one of the few researchers looking into how vaping affects pregnancy back in 2014. Her research has focused specifically on the effects of nicotine on pregnancy. She says part of the reason she wanted to conduct her research was because she noticed that pregnant smokers were switching to vaping because they thought it was a healthy way to quit smoking cigarettes. But Suter says that nicotine changes fetal brain and lung development, so vaping "is not a healthier alternative to tobacco cigarettes."

Like Caron, Suter noted that there was simply not enough research on the effects of vaping on reproductive health. “There are a lot of young women or even young girls who are getting introduced to these devices,” Suter says, “and there's just no data out there on its effect on their fertility.”

While their research covered two very different aspects of vaping, both Caron and Suter emphasized how the rate at which young people are picking up vaping, paired with the lack of research on how it affects people with uteruses, is creating a massive public health question.

“The number of young people who are vaping now has just increased at such a dramatic rate that we now have a new population of people with a new form of environmental exposure that is unprecedented and hasn't been studied,” Caron says.

Johnson now works closely with the Truth Initiative to raise awareness about the risks of vaping. “I know we think we're invincible and we think that all this stuff we do is isn’t going to kill us so we can just be as reckless as we want and nothing will happen to us,” Johnson says, “but people just really fail to realize that our actions have consequences.”

Johnson wasn’t aware that vaping could eventually land her in the ICU. She says that since it was so common at her high school, and since it wasn’t smoking, she assumed nothing bad would happen. She also said that, while at the time she wasn’t thinking about how it would affect her body down the line, it’s a reality she has to consider now.

“I always make jokes like, I probably just have some random form of cancer they don't even know,” Johnson says, “but the sad truth is I don't know the long-term effects of what my habit did to me, and that's really, really scary.”

More like this
An Expert Weighs In On The Viral Raw Carrot Salad Trend
By Alexis Morillo
Here’s Your Horoscope For Unconventional Aquarius Season
By Brittany Beringer
Your January New Moon Horoscope
By Nina Kahn
25 Inspiring Quotes From Black Women To Celebrate Black History Month
By Kyli Rodriguez-Cayro and JR Thorpe
Get Even More From Bustle — Sign Up For The Newsletter
From hair trends to relationship advice, our daily newsletter has everything you need to sound like a person who’s on TikTok, even if you aren’t.