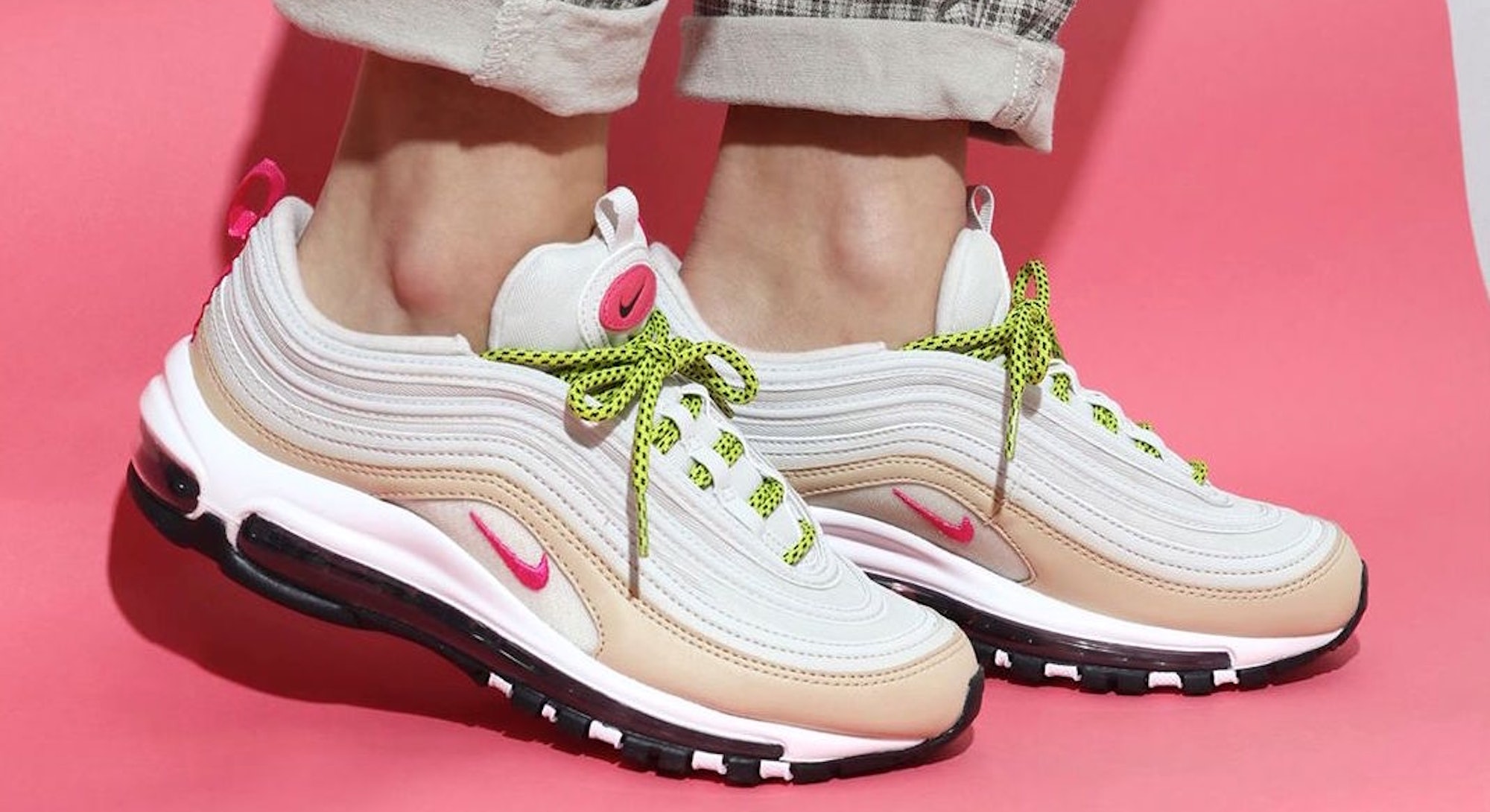 From the inside of the Shinkansen, the Japanese lightning-fast bullet train, it might not feel like you're traveling at speeds of 200 mph. But from the outside, some might argue that it looks like you're going even faster. If you blink, you might miss the Shinkansen, but even with eyes wide open, it's just a flash of silver metal zooming past you. That image — a futuristic, spaceship-like body shooting through the streets of Tokyo — is what inspired Nike and footwear designer Christian Tresser to create the Air Max 97 Original sneaker over 20 years ago.

The Air Max 97 Original was not a subtle sneaker. It was flashy, chunky, and unorthodox — all elements that reflected the "maximalist" aesthetic that defined the decade. It was meant to stand out — just like the silver bullet train (as well as a silver mountain bike, noted Tresser in a 2017 Instagram post), with its reflective piping that beamed in the light. Instead of straight lines, there were wavy ones, intended to mimic the radiating ripple effect of a drop of water.

It was an extremely innovative shoe that some would argue was ahead of its time, because even beyond the colors and the shapes, the sneaker's features also seemed like they were from the future. It was the first shoe to use a full-length, dual-pressurized air bag, which meant that it boasted full-length air across the bottom of the shoe, unlike sneakers before that only had "air" in the heel. It also had a "hidden" lacing system where the shoelace loops were concealed. It might not seem impressive now, but in the late '90s, it was a big deal.

While the shoe undoubtedly made a splash when it launched in the United States — in New York, the shoe dominated the hip-hop, dance, and arts scene — the Air Max 97 Original also experienced worldwide fame. Across the pond, the Spice Girls' Melanie Chisholm, more famously known as Sporty Spice, was known to rock the sneaker with her color-coordinated athletic outfits. However, the sneaker received its greatest reception in Italy. To Nike, that kind of made sense — why wouldn't a country whose identity is deeply rooted in art, culture, and innovation appreciate such an imaginative shoe? "After its 1997 introduction, the shoe became an unofficial part of Italy’s wardrobe when a countrywide craze for 'Le Silver' blossomed," Nike described in an article about Italy's obsession with the sneaker.

In 2017, the Air Max 97 turned 20, and as Nike does, they decided to celebrate with a reissue. Nike re-released the original sneaker, first in Italy (with Italian flag-colored heel and pull tabs), then around Europe, and finally in the United States with a slew of new colorways and an updated design. The Nike Air Max Ultra was lighter and a little more comfortable to wear, but maintained the original sneaker's main design elements, according to Dylan Raasch, Nike Senior Sportswear Design Director.

“The Air Max 97 is an icon and is so beloved that we’re very careful in honoring the OG and understanding the balance of its design," Raasch shares over email. "As we modernize a shoe, we’re making sure we celebrate the original lines and maintain what is iconic about the OG."

Since then, the Air Max 97, both old and new, have probably flooded your social media feeds. You've likely seen many of your favorite bloggers wearing it in their #OOTDs or in street style photos during Fashion week. It's no longer just a running shoe (yes, it was originally intended to be a running shoe) or a sneaker beloved solely by the Milanese.

"The [Air Max 97] is just the right amount of chunky and retro — all things that people are turning back to classic sneakers for right now. Not too chunky, still kind of sleek. Retro, but ahead of its time," Evelynn Escobar-Thomas, Social Media Manager at Undefeated, explains to Bustle. While fashion's current obsession with the '90s and the anniversary have both sparked the sneaker's recent revival, another major reason the Air Max 97 has risen back to the top is in large part due to women.

"Women are demanding more [sneaker] styles and [I think] this is one of the shoe styles Nike has listened to women about," Rachel Grant, Assistant store director and visual manager at KITH Los Angeles, tells Bustle. Although it should come as no surprise to anyone that women have long been wearing sneakers, 2018 marked a pivotal year for women and the sneaker industry, as Maria Bobila argued in an article for Fashionista. An obvious indicator of this? Nike's business plan. In an interview conducted with TIME in February 2018, Amy Montagne, the Vice President and General Manager of Nike Women, disclosed that the company had plans to expand its women business from $6.6 billion to $11 billion by 2020. Nike also launched Unlaced, the brand's "new sneaker destination for women" back in February. As a result, shoes like the Air Max 97 are now being reinterpreted for women in mind.

"I think it’s one shoe that Nike has made smaller sizes in [and] also really cool options, from reflective [features] to Swarovski crystals," says Grant. Grace Chang, a Nike spokesperson, echoes Grant's sentiments. "The 97 is a classic silhouette that can be reimagined in so many different ways," Chang tells Bustle. "There's the classic OG but then, for example, today I'm wearing [some] and it's completely leopard print with furry, faux pony hair. It really speaks to our female consumer because it's so style-driven."

But Genevieve Chanelle, Content Strategist and Brand Manager for The_ONES, Zappos' women-focused sneaker editorial section, has always seen the Air Max 97 as a sneaker worn by feminists. "Historically, it’s been a shoe heroed by women. One of my first memories of the 97 [was] watching Sporty Spice wear them. It was so encouraging as a young girl to see that [and] be like, 'It’s OK for me to want to dress sporty and wear sneakers," she tells Bustle.

Nike's thoughtful collaborations and partnerships have also added to the shoe's popularity among women. "Serena Williams, one of my favorite female athletes, recently got her own Air Max 97 collaboration, which helps take it to a whole new level and introduce it to an audience that may not have been familiar with it before," says Chanelle. Nike also announced another collaboration with Swarovski on Dec. 18, where they've decked out the gold version of the sneaker in over 50,000 crystals.

If you go to the Nike Women's homepage, you'll find an image of the Air Max 97 smack dab in the middle. "Made to make waves," the text next to the shoes reads. The bold, statement-making sneaker wasn't originally set out to represent strong, game-changing women, but it certainly seems like it does now.