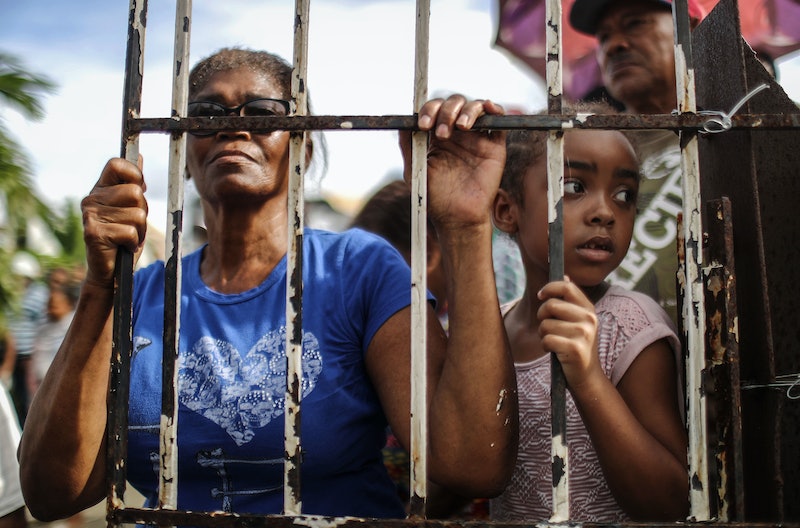 Puerto Rico could soon be facing another hurdle in its recovery from Hurricane Maria. If passed, the GOP tax plan could dampen Puerto Rico's storm recovery, as it seeks to impose a 20 percent tax on goods made in Puerto Rico that are then shipped to continental United States. This tax could significantly harm Puerto Rico's medical manufacturing sector and make recovery even more difficult on an island that's already stretched thin, economically-speaking.

The tax bill passed the House earlier in November and is currently being debated in the Senate. The version that passed the House included a 20 percent excise tax on "offshore transactions," — which includes goods coming from Puerto Rico to the United States. Proponents of the excise tax say that it will encourage the production of goods and creation of jobs on the U.S. mainland. However, according to Jennifer Gonzalez-Colon, Puerto Rico’s nonvoting member of Congress, this is unlikely. Gonzalez-Colon told Bloomberg that she believes, as it stands, the tax bill will encourage companies to move abroad and find cheaper production costs, versus moving to the mainland United States.

Moreover, according to Bloomberg, Gonzalez-Colon takes issue with the fact that the excise tax is designed to protect American jobs, yet it applies to the import of goods from Puerto Rico, an American territory whose residents are U.S. citizens. As the representative told Bloomberg, "Congress and the administration ran on the platform of supporting American manufacturing. That’s exactly what the manufacturing sector in Puerto Rico is — it’s American jobs.”

According to NPR, manufacturing comprises nearly half of Puerto Rico's economy. Thus, many in Puerto Rico are fearful that, if the tax bill is passed with the 20 percent excise tax, the island's economy will suffer severe consequences, making recovery from Maria even more difficult. The island is already $70 billion in debt and 32,000 people have lost jobs since Hurricane Maria hit. Moreover, 189,000 people have left the territory for the U.S. mainland since the storm arrived at the end of September.

As The Daily Beast reported, if the tax bill is passed with a 20 percent excise tax, then companies in Puerto Rico, particularly in its robust medical manufacturing industry, could be forced to close — something which could result in the loss of 200,000 jobs on the island. That loss would be in addition to the aforementioned 32,000 jobs lost due to the hurricane.

Bloomberg noted that the Chief Executive of Amgen, a medical manufacturing company with a large presence in Puerto Rico, reported that a change in tax laws would represent a significant shift from the status quo for Puerto Rico — and implied that tax protections should be maintained in order to encourage companies to continue to invest in the island:

A number of organizations, including Amgen, have major investments in Puerto Rico that were made there to capitalize on the tax advantages created by U.S. laws ... The bill should “maintain the incentive for us and others to invest on the island.

Tom Vincent, the vice president of Prime Air Corp., a logistics firm that serves some of the manufacturing plants in Puerto Rico, also pointedly described the potential ramifications that the dual impact of the hurricane and tax reform could have on the territory. He told Bloomberg,

Maria was a Category 4, 5 hurricane -- if the tax reform passes through the way it is, it’s going to be a Category 7 ... It would make anyone in Puerto Rico lose sleep.

While Puerto Rico's representative, Gonzalez-Colon, told NPR that she has received "assurances" from Republican leadership that the part of the bill "affecting Puerto Rico will be fixed before final passage," the fact that the measure was even in the bill in the first place has to be highly concerning for Puerto Rico's residents. Moreover, assurances are certainly not set in stone and could be subject to change.

Therefore, those in Puerto Rico, including the public and the leadership of many manufacturing companies, will be anxiously watching to see what happens as the tax bill is debated in the Senate — and whether or not the island's economy will stand to face a further windfall.