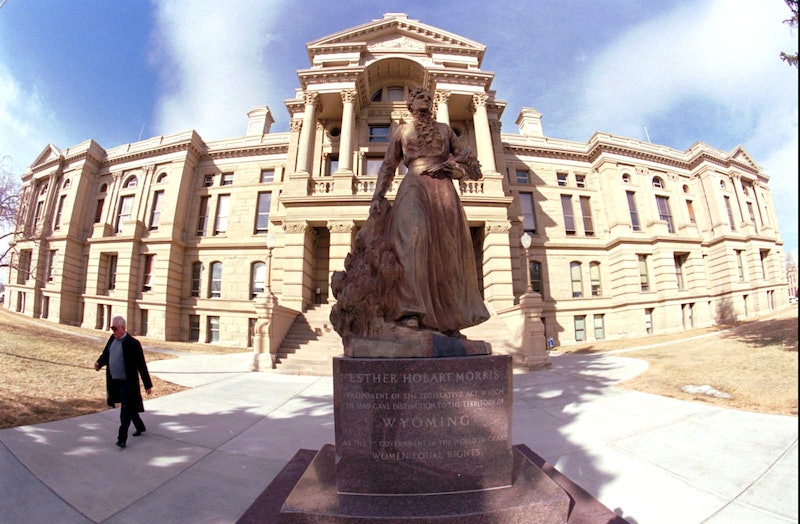 Wyoming isn't exactly seen as a beacon of feminism these days. The state hasn't elected a woman as governor in almost a century, and women make up just 16 percent of the state's legislature. But the state actually led the way for women's suffrage. In fact, the history of women's rights in Wyoming predates the rest of the nation's on multiple fronts — and the complicated reasons it was so ahead of its time are just as riveting as other tales from the Wild West.

"When you talk about the Equality State, it’s interesting because we have fewer women in government than one would expect, and pay is still an issue," Renee Laegreid, a professor of the history of the American West at the University of Wyoming, tells Bustle. "So we still have the same issues as most other states. But in terms of getting the vote, we won that."

Wyoming guaranteed women's right to vote in December 1869 — a full 50 years before women were able to cast ballots in every election nationwide, and 20 years before the territory became a state. At the time, members of Congress actually argued at that Wyoming shouldn't be allowed to enter the Union with women's suffrage intact.

"Mr. Speaker, I do not hesitate to say that in my judgment the franchise has been too liberally extended," Rep. William Oates of Alabama said during a debate on the House floor in 1890. "Should we ever reach universal suffrage this Government will become practically a pure democracy and then the days of its existence are numbered."

Wyoming officials fired back that they would "remain out of the Union 100 years rather than come in without the women." Congress eventually caved and welcomed Wyoming into the Union, with women's right to vote still guaranteed within state borders.

"Wyoming really laid the foundation and groundwork for national suffrage — which came 50 years after the fact — that if you allow women to vote it’s not going to completely create anarchy within government," Republican state Sen. Affie Ellis tells Bustle.

A Tumultuous Fight For Suffrage

When the Wyoming legislature passed women's suffrage, western territories were in competition for settlers. Multiple territories had tried and failed to pass women's suffrage before Wyoming, Laegreid explains, so the movement was already underway. But the perfect storm of political rivalry just happened to form in Wyoming.

Ellis doesn't believe suffrage was passed purely to help boost the population in Wyoming, though the ratio of men to women in the territory back in 1869 was six to one.

"If you read the newspapers at the time, some people said, 'Well if we’re going to grant the right to vote to African-Americans, to Chinese workers that were living in Wyoming, then surely your wives would be as capable of voting,'" Ellis says. "So there was a lot of that kind of discussion, and it ultimately came down to: It’s the right thing to do."

But it wasn't that simple. After the Civil War, President Ulysses S. Grant appointed Republicans to serve as Wyoming's first territorial governor, secretary of state, and attorney general. Some animosity arose when only Democrats were elected to the territory's first legislature.

"The Democrats enjoyed the possibility of embarrassing him," website reads. But, much to their surprise, the governor didn't veto it.

Once women could hit the ballot box, Democrats expected them to vote for the party that fought for them to access it. But Democrats were largely voted out of office in the next election. In retaliation, Democratic legislators moved to revoke women's suffrage before they left office, according to Laegreid. When the governor vetoed this repeal, the legislature fell one vote short of overriding his decision, and women in Wyoming kept their voting rights.

As Ellis notes, women of color were probably still excluded from the polls — especially Native women. Yet she says it's likely that matriarchal tribes influenced the early pushes for women's rights in the west.

At the center of Wyoming's suffrage movement was Esther Hobart Morris, whose statue sits outside the Wyoming Capitol today. Morris was a New Yorker who moved to South Pass City, Wyoming, with her second husband. She did her best to keep in touch with suffragettes back east, according to Laegreid, and played an integral part in getting the Wyoming territorial legislature to guarantee women's right to vote.

"She’s hell on wheels," Laegreid says. "This is not your sweet grandma. This is a woman that gets work done."

In 1870, Morris was appointed justice of the peace, becoming the country’s first female judge at the age of 59. She handled a lot of cases involving men who got drunk and behaved badly, and her punishments didn’t exactly go over well, Laegreid explains. Although she was voted out of office after only eight months, none of her decisions were overturned.

Earlier this month, Wyoming passed a law initially introduced by Ellis to recognize the 150th anniversary of women's suffrage in the state and urge the National Women’s Hall of Fame to induct Morris.

The state was ahead of its time when it came to women's rights, and that movement extended far beyond Morris and women's suffrage. Wyoming elected the nation's first female governor, Nellie Tayloe Ross, in 1924 to complete her husband's term (Ross went on to become the first woman to head the U.S. Mint). Wyoming appointed the nation's first female jurors and the first female bailiff. And Jackson became the first town in the country with an all-female government in 1920, which was dubbed the "petticoat government."

"Hopefully by shining light on our history," Ellis says, "we can have a better understanding of what the western suffragettes’ movement meant for women across the country."