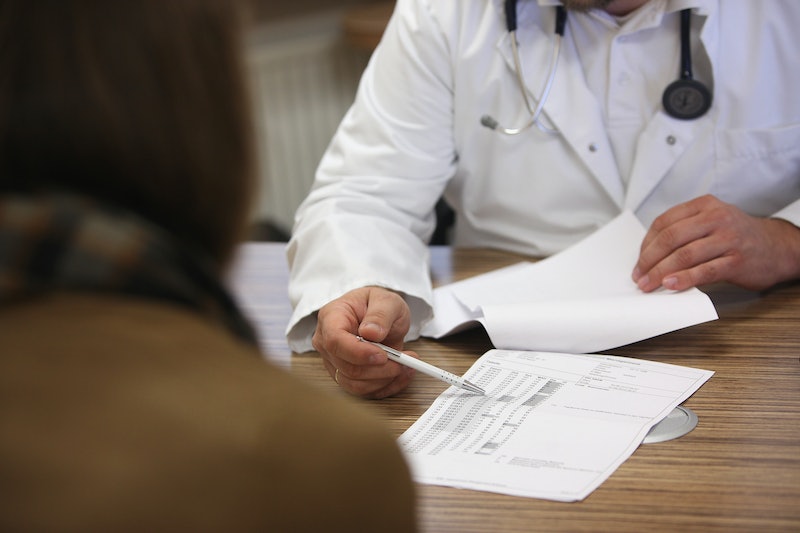 When we think of the activists leading the charge for trans rights, celebrities like Janet Mock, Laverne Cox, and Jazz Jennings often come to mind. However, some doctors are also now trans activists, pushing for trans-inclusivity in the medical community by changing the way health professionals treat their trans patient.

One of the doctors at the helm of the movement is Jack Turban, a medical writer and resident child and adolescent psychiatrist at Harvard Medical School. Turban has dedicated his research and energy towards writing about pediatric gender identity and the ways the medical establishment can better affirm trans kids.

"I spent the past few years creating a curriculum at Yale School of Medicine on the treatment of transgender patients, and similar initiatives are underway at Harvard Medical School and other schools around the country," Turban tells Bustle. "My hope is that we will create a new generation of compassionate informed physicians who can help these patients thrive."

Launched in 2015, the Yale School of Medicine's Gender Program provides comprehensive care to gender variant children and young adults, as well as their families. Beyond providing families and patients with medical care, the program also gives patients access to regular meetings with a mental health provider who gives them a "readiness evaluation" and checks for signs of anxiety and depression.

A 2016 study from the Cincinnati Children's Hospital Medical Center revealed that as many as 30 percent of trans youth attempt suicide at least once, with as many as 42 percent reporting habits of self-harm. Turban tells Bustle that he hopes expanding support systems in the medical community will bolster mental health for trans youth. "Over the past few years, we have seen more research showing that when you affirm transgender youth, they have excellent mental health outcomes," he explains.

This is a big contrast to past studies of transgender individuals who weren't affirmed. Because many of those people were rejected by their communities, families, and often their doctors, they suffered high rates of anxiety and depression. For a startling number of transgender people, this rejection was so persistent and damaging that they considered suicide.

Doctors, like Turban, are also fighting misinformation spread about the trans community among their fellow medical professionals. Turban says he is particularly alarmed by the American College of Pediatricians, also known as ACPeds. The group has been accused of spreading misinformation about the LGBTQ community, including by the director of the National Institute of Health, Francis S. Collins.

In 2010, Collins issued a statement denouncing what he saw as ACPeds' misrepresentation of his work:

It is disturbing for me to see special interest groups distort my scientific observations to make a point against homosexuality. The American College of Pediatricians pulled language out of context from a book I wrote in 2006 to support an ideology that can cause unnecessary anguish and encourage prejudice. The information they present is misleading and incorrect, and it is particularly troubling that they are distributing it in a way that will confuse school children and their parents.

Bustle reached out to ACPeds for comment, but has received no response at this time.

"The ACPeds regularly publishes misleading online reports suggesting that being transgender is unhealthy and that doctors should try to change these patients," Turban says. The group released a set of guidelines in March 2017 stating:

The American College of Pediatricians urges healthcare professionals, educators and legislators to reject all policies that condition children to accept as normal a life of chemical and surgical impersonation of the opposite sex. Facts — not ideology — determine reality.

In early May, Turban wrote a column for Psychology Today attacking ACPed's credibility, noting the group has a history of supporting reparative therapy for LGBTQ youth and arguing that gay parents are not as good as straight ones. Furthermore, Turban added that the Southern Poverty Law Center has labeled ACPeds as an "anti-LGBT hate group that promotes false claims and misleading scientific reports."

Turban is not alone in his commitment to pushing the medical community to be more trans-inclusive. In 2015, the American College of Physicians published an updated version of the The Fenway Guide to LGBT Health, with the goal of making the health care community more welcoming towards LGBT patients, particularly trans patients.

Still, Turban sees his work in the medical community as only one part of the larger goal of creating affirming and safe environments for trans people.

The more we create supportive environments, the more comfortable patients will feel seeking medical care. If you see a healthcare professional acting judgmentally or being insensitive, feel empowered to speak up and educate providers. Go out of your way to bring up conversations about how important it is to be warm and supportive toward transgender people. The more we talk about the importance of affirmation, the more it will become the norm.